Zionism As A Reflection of Jewish History Past and Present

An interview with Alex Ryvchin, author of "Zionism: The Concise History"
(Originally posted on The Jewish Press)

Q: What do you see as the purpose of your new book, Zionism: The Concise History, and who is it for?

A: The whole concept of Zionism has been politically and strategically trashed by her enemies. The danger is that future generations will only know Zionism as an evil to be fought and the young people, whom we count on as the next advocates to tell the story of Zionism and defend it, today are generally apathetic or ignorant of this story. We hear people saying Zionism has nothing to do with Judaism or being Jewish, but I think Zionism is inextricably linked to Jewish history.

The story of Zionism is the story of the Jewish people. And if Jews don’t know that story and don’t take part in it, we will see greater rates of intermarriage and loss of identity.


For this reason, I’d like to see my book taught in schools and universities. 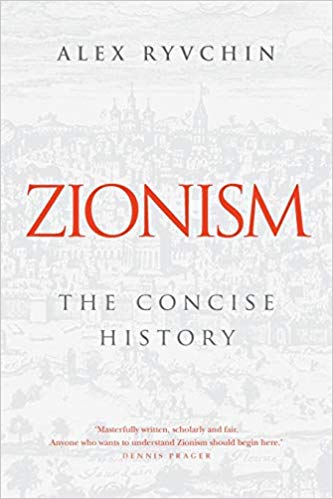 Q: One of the patterns in Jewish history is making questionable alliances with apparent enemies. You mention Herzl in this regard. Can you give an example, and do you think this is an unavoidable element of Zionism?

Herzl dealt with a lot of ardent antisemites like the Kaiser and the Russian Foreign Minister. He felt a cold synergy between the interests of Zionism and these rabid antisemites. Herzl thought that for the Jews to achieve the return to their ancestral land, these antisemites who are so keen to purge their countries of Jews would be accommodating. And indeed, many of them saw a benefit in a movement that could absorb a large number of Jews.

In any political campaign such as Zionism, there has to be a dose of realpolitik--to think not only about the idealism, but also how to practically achieve your goal. That means creating alliances with those you find unsavory. The danger is when you look at an alignment of interests as temporary and mistake that for good faith or long term alliances. To Herzl’s credit, he quickly realized he was not going to achieve the goals of Zionism through alliances with those who were fundamentally hostile to Jewish rights. That is why he shifted the Zionist movement from the European continent to Great Britain, where he found men who more driven by Christian ideals and a general passion for the idea of the Jews returning to their ancestral land.

Today, Israel has formed alliances with some nations that might really see a short term alignment of interests, but don’t harbor any great feeling of warmth towards the Jewish people. That is dangerous, but it is also the world that we live in. And as long as the Netanyahu government and the successive governments go into this with their eyes open, I think it is something that can and needs to be done. But at the same time, I think that Israel should act morally in this regard and call out antisemitism of far-right leaders around the world with whom they may have diplomatic relations. If those relations are genuine, they will withstand those criticisms.

Q: We know the Balfour Declaration favors the establishment of “a national home for the Jewish people” in Palestine and that “nothing shall be done which may prejudice the civil and religious rights of the existing non-Jewish communities in Palestine” -- but it also says nothing should be done to prejudice “the rights and political status enjoyed by Jews in any other country.” What was that issue?

A: The concern was that Zionism was not the universal position of the Jewish World. There was still discussion in the Jewish World what was best way to alleviate the suffering of the Jews was through assimilation. Not everyone was on the side of Zionism, particularly those who lived in liberal Democratic countries like the UK, Australia and the US. They did not see the need for a national movement to return to Palestine. They favored assimilation.

In order to assuage those concerns, that wording was put in, to say that basically, those Jews who preferred to live outside of the Jewish State would continue to live in the Diaspora with nothing to impede their rights. There was a concern that once the Jewish State was formed, Jews living outside that state would be viewed as alien, foreigners. That language in the Balfour Declaration was to protect them.

I am keen that people should read this book and apply its lessons to contemporary times. I think that is very important.

Bernie Sanders is different from those Jews in the early 20th century who were driven mainly by self-preservation. They were men who, despite being Jewish, soared to the heights of public life in the UK and Australia. They looked at Zionism, dedicated to liberating the Jewish people and alleviating their antisemitism and thought: what do I need this for; it will only have a detrimental effect on my standing!
Sanders is not motivated by that sort of calculus. He is an American Jew, deeply committed to perfecting American society, making it as just and equitable as possible the way he sees it. I think he views Zionism as a foreign project and doesn’t identify with it. Also, he is associated with the hard left who are rabidly anti-Zionist and has to placate them.

Q: Originally, Arab leaders like Hussein ibn Ali and his son Amir Faisal allied with Chaim Weizmann and favored the re-establishment of a Jewish state. Then along came Mohammed Amin al-Husseini, the Grand Mufti, who incited riots and tried to prevent it. Today, are we seeing a shift back in the other direction?

A: Today the Arab states see the peace treaties between Israel and Egypt and Jordan. They see if you don’t threaten Israel, it won’t harm you back, will be good friends and share technology. Israel can become a dependable strategic ally in the face of much bigger threats like Iran.

But at the same time, one thing that Zionism teaches us is that alliances come and go, they rise and fall, and cannot really be depended on. They need to be used at that point in time. As long as Israel is economically, militarily, and diplomatically strong, that is the most important thing. Let Israel choose alliances at that point in time, but it cannot depend on anyone.

Q: In the last chapter of your book, you discuss anti-Zionism, which started off as Jewish opposition to Zionism. How is that different from today’s anti-Zionism on college campuses and expressed by politicians?

A: Early anti-Zionism is virtually unrecognizable from anti-Zionism today. The anti-Zionist Jews at the time were overwhelming loyal, proud Jews who cared deeply for the future of the Jewish people, but they had a different view on how to solve the problem of antisemitism in the streets. Their solution was the full immersion into the societies in which they lived. It was a legitimate point of view, but ultimately disproven.

The anti-Zionist Jews of today do not care about Jewish rights. Instead, they use their Jewishness to attack their own people. Rather than stand up against their oppressors, they side with them.

But once the state of Israel exists, anti-Zionism becomes not merely a different political position or philosophy, it now becomes the opposition to the existence of the state of Israel--a state that has now existed for over 70 years. Anti-Zionism is no longer a morally tenable position. That is why you will not find in the ranks of anti-Zionist Jews someone who cares about the future of the Jewish people. Instead, overwhelmingly you find selfish people of low character.

Q: You trace Great Britain’s change into an enemy of Zionism to its being a declining imperial power, stretched thin and wearied by Palestine. Some might see that as a description of the US. Do you think there is a danger of Zionist history repeating itself here too?

A: I think so. That description of Great Britain in the 1940s could apply to the US today. There is a growing trend, particularly under the current president, of isolationism and rethinking US foreign policy solely in terms of US interests. It is no longer fashionable to think the US should bring the values of democracy to the darkest places in the world and be a force for good.

There especially a risk with the progressive Democrats who don't have that instinctive warmth for the state of Israel as establishment Democrats have in the past.

Governments and allies come and go. Israel needs to remain strong and independent to preserve its interests. We have seen this already in the course of its existence.