Hamas And Zoning In Gaza: Aerial Maps Of How Hamas Uses Human Shields

Click on either of the 2 images below to see the complete photo illustrating how Hamas takes care of Gaza.

During the Gaza War, Hamas leaders should have been hiding out of shame--instead of out of cowardice.

Speaking of having no shame--you won't find these facts highlighted in the Goldstone Commission Report.

The following is from Take-A-Pen: 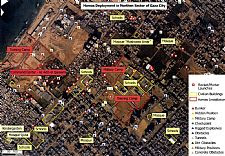 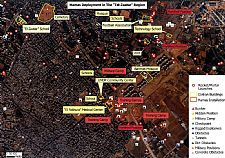 One of the most appalling Hamas war crimes has been the systematic use of civilians, and children in particular, as Human Shields for hiding or acting Hamas gunmen. Many photos are known showing Palestinian kids placed in the closest vicinity to acting gunmen, mostly when the kids are "bravely" posing with the gunmen. Fewer documents are available, understandingly, disclosing the violence used to force children to be in the most dangerous places in combat. An internal search with the words "human shield" in the Take-A-Pen website only - http://www.takeapen.org/ - would provide the honorable Mission with 31 supporting info pieces. This time we'll focus on Hamas using another type of human shield.

Special Protected Civilian Objects (like school buildings, hospitals, a mosque or a football stadium) serve as a special form of the Hamas Human Shields. Their specialty is that civilian concentrations and these special protected objects are not used as a momentary shield of acting Hamas military, but are deliberately placed constantly in harm's way - where Hamas provokes returning Israeli fire to these sensitive protected objects by shooting and launching rockets from their vicinity. This war crime was especially difficult to believe, and therefore we have been looking for convincing evidence untiringly, and have finally found it and are submitting it to the Fact-finding Mission in the following.

The hard evidence that Hamas deliberately committed the special Human Shield war crime of systematically exposing Protected Special Civilian Objects (like school buildings, hospitals, a mosque or a football stadium) to maximum danger, is two IDF (Israeli Defense Forces) aerial maps showing the Deployment of Hamas in two different civilian regions in Gaza and the location of the actual rocket launches there: executed in the closest vicinity of protected objects, hoping obviously that the returned Israeli fire would cause maximum casualties.

Map-2 shows Hamas Deployment in Gaza's "Tel Zaatar Region"(see PDF file below). It shows an even more evil location pattern. About 20 rocket launchers were located in dense urban areas, 6 ones adjacent to a football stadium, 3 inside the "El Fakhura" Medical Center, 1 within the UNDP Community Center. Notice that not a single rocket launcher was located in the large uninhabited open areas on the right down part of the map. Huge amounts of rigged explosives were concentrated in the Hamas training center - just adjacent to the Medical Center and the Community Center.

According to international law all these cases are severe Hamas War Crimes, and de jure for any civil casualties there Hamas should bare full responsibility.

But, de facto, the IDF took responsibility, handled these cases with extreme self-constraint in order to save civilian life; and so Hamas gained undeserved military advantage. In the relatively rare cases of unintended civilian losses nevertheless, an uninhabited Hamas propaganda machinery sold its invented or at least exaggerated stories, what a well-funded self-appointed NGO community and the world media motivated by rating above truth uncritically conveyed to the public.

While the previous sentence may be considered as Take-A-Pen's own view, the submitted hard facts about the Hamas Human Shield War Crimes embody hard evidence.