One of the major themes of the Democratic National Convention becomes clear as Democrats charge Republicans with "war on women" at convention:


Two dozen Democratic women from the U.S. House of Representatives brought the charge that Republicans are waging a "war on women" to the party's convention stage on Tuesday with sharp denunciations of Republicans on healthcare, equal pay and domestic violence.

Led by Nancy Pelosi of California, the only woman to serve as speaker of the U.S. House, the women pressed the party's argument that the Democrats will protect women's interests against what they described as Republican attacks.

It wouldn’t be a Democratic convention without a tribute to Ted Kennedy. The party celebrated his life and legacy four years ago in Colorado, where an ailing but determined Kennedy made his last appearance at a national convention.

And what was the off note?

The concern is that the video video was introduced by 4th District congressional candidate Joseph P. Kennedy III, who has not yet won the upcoming Democratic primary.

Actually, in view of the Democratic Convention theme that the Republican's are waging a war against women, one might think that the "off note" was this part of the Kennedy video: 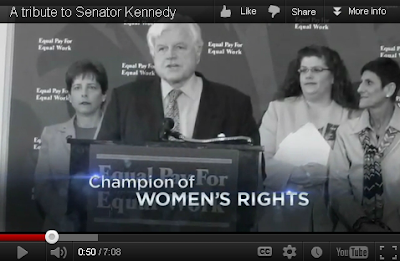 
I’ve got to say, in all sincerity: I appreciate their brazenness in building a convention around the theme of a “war on women” while not only inviting Bill Clinton to be a headline speaker but having a video tribute to Teddy to start things off. They’re all but admitting that their pretense of moral superiority really is just a pose taken for political effect. If John Edwards had walked out onstage to a standing ovation after this clip ended, it would have been one of the most honest moments in recent convention history. Alas, a missed opportunity.

Unlike Mary Jo Kopechne, Elizabeth Edwards was able to write and speak about what happened -- and Hillary stood by her husband.