We are all familiar with the Arab children, victims of the wars and attacks started by their governments against Israel--the media sees to that: 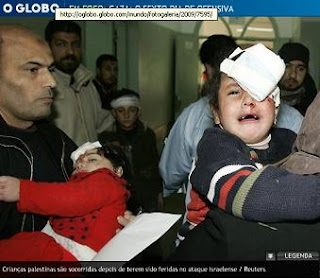 But the media is not quite as relentless in pushing the pictures of the other Arab children, victims of their government's cruelty, in front of our eyes:


Hamas does not systematically recruit children for military activities. However, there have been a number of serious incidents where children were involved in operations carried out by its military wing. At its most extreme, children have been recruited for suicide operations, although there have been no reports of this practice since 2004. However, several 16 and 17 year olds, nearly always male, have continued to take part in armed attacks on settlements and clashes with Israeli forces. In 2004 Defence for Children International (DCI-Palestine) documented 22 incidents where under-18s were killed as a result of their involvement in militant actions. Of these, one was claimed by Hamas, involving a raid on a settlement by a group in which a 17 year old from Shaja'iyya in Gaza was killed. Two incidents were attributed to Hamas in 2003: one involving a 16 year old who attempted to infiltrate a settlement in Gaza and the other a 17 year old killed in a gun battle in Jenin. Also in 2004 Gaza’s Mezan Center for Human Rights (Mezan) documented seven deaths of minors as a result of involvement in militant actions. This included two separate incidents claimed by Hamas where minors of 16 and 17 were killed in clashes with Israeli forces.

This year, Obama has again waived penalties on countries that employ child soldiers--so in the case of Hamas, where children are merely brainwashed to hate, it is not surprising that the US provides aid to Gaza without regard for how those children are used, and abused.

And the media is silent.

Can't see any photos. Thanks!

Thank you for letting me know.