We Have Legal Rights!

It never ends: one crisis, one issue after another.  Perhaps you are familiar with the curse: "May you live in interesting times."
Yesterday, Housing Minister Uri Ariel (Habayit Hayehudi) announced plans for "evaluating potential" for 24,000 housing units in Judea and Samaria.  Please be clear on this: it was not, as some news sources had it, announcement of concrete plans for those 24,000 units.  It was initiation of a process to look into building in several places in Judea and Samaria. (Most controversial: 1.200 projected units in E1, an area between Ma'aleh Adumim and Jerusalem.) Some might have materialized, some might not have.  But even in cases where potential was positively assessed, it would have been a long time (years) until anything was built.  This sort of process goes on all the time.

Doesn't sound like a huge deal.
However, Peace Now, which is eager to obstruct any Israeli potential for building past the Green Line, got wind of this (which is usually the case) and released the information.
And then, naturally, Secretary of State Kerry decided to make a huge deal of it, declaring that we were interfering with the "peace process."
This, please understand, at the same time that Fatah is accusing Israel -- based on some concocted evidence -- of having murdered Arafat, "just as the Jews murdered Mohammed."  But this sort of inciteful statement was not seen by Kerry as an interference with the "peace process." Of course not.
~~~~~~~~~~
Prime Minster Netanyahu prevailed upon Ariel to "reconsider" all of the preliminary planning, which he described as causing "an unnecessary confrontation with the international community at a time when we are making an effort to persuade elements in the international community to reach a better deal with Iran."
Ariel said he would "reconsider."
~~~~~~~~~~
Here I would like to advance a few thoughts in order to clarify the situation.  When it comes to Israeli building in Judea and Samaria, there are two essential elements -- the legal and the political.  And it is time for us to separate the two as we assesses situations such as the one described above.
I have some sympathy with Netanyahu. I know that stopping Iran is his absolute raison d'etre right now (and not improperly so). I know that -- as long as we do not concede any land! -- we can come back and build at a later date. Whereas we cannot undo Iran's status as a nuclear nation if, heaven forbid, it should come to that.
Netanyahu may have been correct that Ariel's timing was off, for tactical or political reasons.  He may be right in wanting to avoid giving the international community an excuse to focus on housing instead of Iran and to deflect hostility towards Israel.
~~~~~~~~~~
But there are some provisos here.  It would be terribly unacceptable, in my opinion, if Netanyahu were to stop the planning for building with the thought that there was going to be a quid pro quo: that he would get more cooperation from Obama on Iran if he did this.  That was the thinking of the old Netanyahu, who had not yet confronted the full and bitter truth of the full hostility and duplicity of the Obama administration.  We must hope he never falls back into that thinking.
Then, his statements should not imply an organic link between our behavior here, vis-a-vis the "peace process," and what happens with Iran.  That is a fallacious argument that has been floated continuously by Obama and should not be reinforced by Israel.  This was the primary concern of Aaron Lerner, of IMRA.  Yuval Steinitz, Minister of Strategic Affairs, denies that this was the case.
And lastly, the fact that we have a right to build must be made clear.  OK, we will not do it now, for this and this reason.  But let it never be said that we do not have the legal right.  Legality is quite distinct from politics.  And neither the Israeli electorate nor the international community has heard enough about this.
(It is the intention of the Committee promoting the Levy Report Campaign that from now on you should hear about it.)
~~~~~~~~~~
I will add here one other element that likely played a role in Netanyahu's decision to make the statement he did. That "element" is Avigdor Lieberman (head of Yisrael Beitenu), who has just been sworn-in for the second time as Foreign Minister.
In his previous incarnation -- that is, when he was Foreign Minister before he went through a trial for corruption, which ended with a unanimous finding of not guilty -- he was tough in his attitude towards the US and Obama.  But something has shifted -- something we might hope will not be permanent.  Lieberman went to meet with US Ambassador to Israel Dan Shapiro, and came back saying it's not good that we should fight with the US.  Huh?  My information is that Netanyahu felt a sort of support he thought he could count on disappearing out from under him.
~~~~~~~~~~
At the Knesset today, it should be noted, the prime minister said we would be building thousands of homes in Judea and Samaria in the coming months, just as was done in past months.  "It was never easy, but we did it responsibly despite international pressure."
Read: Netanyahu vows to build 'thousands more homes' in settlements
Though not an explicit declaration of our legal rights, this might be interpreted as implying a right to build.  He was, at the very least, attempting to clarify that stopping what Ariel had initiated should not be viewed as a freeze.  Now it remains to be seen if this was a serious commitment or an attempt to reassure his coalition's right flank.
~~~~~~~~~~
There are reports (including from Reuters), which I mention here but do not yet take seriously, that the PA negotiators have quit because of Israel's position on housing.  Abbas says he'll find a new negotiating delegation if they don't come back.  Right...  Most likely PA game-playing.
~~~~~~~~~~
Soldier Eden Atias, 18 (pictured below), was asleep in the front seat of a bus stopped at a station in Afula today, when he was attacked by a Palestinian Arab youth from Jenin, sitting in the seat next to him, who was in Israel illegally.
Atias - who had enlisted in the army only two weeks ago - was rushed to the hospital, but succumbed to the multiple knife wounds in his neck. 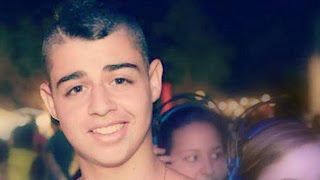 Credit: Facebook
Passengers grabbed the terrorist and turned him over to security personnel.
~~~~~~~~~~~
© Arlene Kushner. This material is produced by Arlene Kushner, functioning as an independent journalist. Permission is granted for it to be reproduced only with proper attribution.