Raymond Ibrahim on When Jihad Backfires on the Arab World

The Double-Edged Sword of Jihad

Islamic nations are again learning that the jihad is a volatile instrument of war that can easily backfire on those who preach it; that "holy war" is hardly limited to fighting and subjugating "infidels"—whether the West in general, Israel in particular, or the millions of non-Muslim minorities under Islam—but can also be used to fight "apostates," that is, Muslims accused of not being Islamic enough.

In an unprecedented move and following Egypt's lead, Saudi Arabia, the United Arab Emirates, and Bahrain recently withdrew their ambassadors from Qatar, largely due to its Al Jazeera propaganda network which, since the ousting of the Muslim Brotherhood, has been inciting chaos in the region.

According to a March 7 Reuters reports, "Saudi Arabia has formally designated the Muslim Brotherhood as a terrorist organization, in a move that could increase pressure on Qatar whose backing for the group has sparked a row with fellow Gulf monarchies…. Saudi Arabia and the UAE are fuming over Qatar's support for the Muslim Brotherhood, and resent the way Doha has sheltered influential cleric Yusuf Qaradawi, a critic of the Saudi authorities, and given him regular airtime on its pan-Arab satellite channel Al Jazeera." 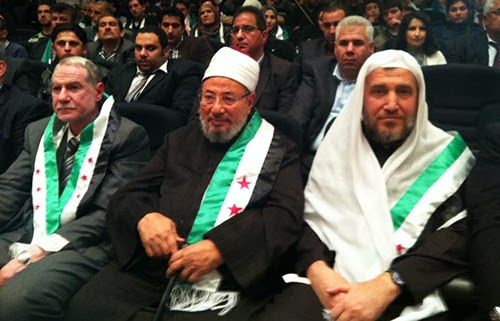 Qaradawi, of course, has been an Al Jazeera mainstay for many years, regularly preaching jihad against Israel and other "infidels"—telling millions of Muslim viewers to "obey the prophet, even if he tells you to kill."
Back then, Qaradawi was not a problem for the Gulf States.

However, since the Egyptian June 30 Revolution saw the ousting and subsequent banning of the Muslim Brotherhood, and ever since the Brotherhood's supporters—chief among them Qaradawi, through his Al Jazeera program—have been inciting violence in the region, especially in Egypt and Syria, the jihad is spinning out of control; and the Gulf monarchs know that, if not contained and directed, it can easily reach them.

For if jihadis are fighting fellow Muslims in Egypt and Syria—under the accusation that they are not "true" Muslims—what is to stop them from targeting the Gulf monarchies in the same context?

Thus, although the Saudis originally promoted the jihad against the Syrian government—sending and supporting militants, both Saudi and otherwise—in a complete reverse, the Arabian kingdom has just designated several of these jihadi organizations, including the Nusra Front and the Islamic State in Iraq and Levant, as "terrorist" organizations.

This move, according to Reuters, "underscored concern about young Saudis hardened by battle against Assad coming home to target the ruling Al Saud royal family—as has happened after the wars in Afghanistan and Iraq."

And so history repeats itself. Back in the 1980s, the Saudis were chief supporters of the jihad against the Soviets in Afghanistan and helped create al-Qaeda. But once the "distant" infidel was subdued, al-Qaeda and its Saudi-born leader Osama bin Laden came home to roost, doing the inevitable: pointing the accusatory finger at the Saudi monarchy for not being Islamic enough, including for its reliance on the great American infidel during the First Gulf War.

This is the problem all Muslim nations and rulers risk: no one—not even Sharia-advocating Islamist leaders—are immune to the all-accusing sword tip of the jihad. If non-Muslims are, as "infidels," de facto enemies of Islam, any Muslim can be accused of "apostasy" whenever they break this or that Sharia command, and thus also become enemies of Allah and his prophet.

A saying attributed to the Muslim prophet Muhammad even validates this: "This umma [nation] of mine will split into seventy-three sects; one will be in paradise and seventy-two will be in hell." When asked which sect was the true one, the prophet replied, "al-jama'a," that is, the group which most literally follows the example or "sunna" of Muhammad, a thing not so simple to do.

Moreover, the first large scale jihads were against apostates—the Ridda ["apostasy"] Wars. After Muhammad died in 632, many Arab tribes were still willing to remain Muslim, but had second thoughts about paying zakat money to the first caliph, Abu Bakr. That was enough to declare jihad on them as apostates; tens of thousands of Arabs were burned, beheaded, dismembered, or crucified, according to Islamic history.

Indeed, Qaradawi himself, while discussing the importance of killing any Muslim who apostatizes from Islam on a live Al Jazeera program, correctly declared that "If the penalty for apostasy was ignored, there would not be an Islam today; Islam would have ended on the death of the prophet."

All this further explains why nations like Saudi Arabia fund and support external jihads—to keep the zealots away from them, busy fighting distant infidels (a "better them than me" mentality).

But now that the Egyptian military ousted the Muslim Brotherhood and Al Jazeera, Qaradawi, and many others are inciting millions of Muslim viewers to wage an increasingly broadening if not reckless jihad in the region—Qaradawi recently went so far as to call on the U.S. to fight against Muslims for the sake of Allah—the Gulf states know they better act now before they are engulfed in chaos.

Accordingly, on March 7, and in the context of recalling their ambassadors from Qatar, the Saudi Interior Ministry issued a statement saying that "those who insult other countries and their leaders" or who "attended conferences or gatherings inside and outside (the country) that aim to target the security and stability and spread sedition in the society," would be punished—a clear reference to those many voices calling for a grand jihad in the region.

This is the great irony of Islam—one of the many balancing acts Muslim nations and leaders must live with. As Muslims, they must of course agree to the Islamic duty of jihad against enemies, real or imagined, and help promote it. In this sense, jihad can be a powerful and useful weapon. Saudi Arabia, for example, is not only a chief disseminator and supporter of the Salafi ideology most associated with jihad, but was forged in large measure by articulating and calling for holy war in the 19th-20th centuries, including against Turks and fellow Arab tribes (both Muslim).

The Saudi argument was, ironically, the same as the current argument made by the jihadi forces the Saudis are now trying to neutralize—that the Turks and Arab tribes were not "Islamic" enough.

Yet now it is the Muslim Brotherhood and its many allies who are accusing the Saudis of not being Islam enough.

Such is the double-edged sword of jihad. All Islamic governments, regimes, and kingdoms must always try to direct this potent instrument of war against enemies or neutral targets—preferably ones far away from their borders (Afghanistan, America, etc.) For they know that the longer the jihad waxes in strength and goes uncontained, the more it becomes like an all-consuming fire indiscriminately scorching all in its path.