The following by Steven J. Rosen is reposted here with permission of the Middle East Forum: 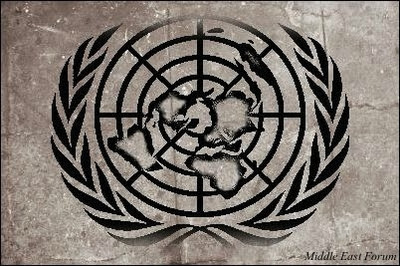 Here is a paradox: UNRWA, the United Nations agency that manages the Palestinian refugee issue, follows rules that contradict United States law and policy, and its practices result in perpetuating and multiplying the refugee problem rather than resolving it. Yet the U.S. Department of State gives unquestioning support to UNRWA's refugee designation rules [1], even on occasion defending them in detail. How can this be?

For example, almost two million Palestinians who have long been settled in Jordan and have for decades enjoyed Jordanian citizenship[2], are routinely counted as "refugees" by UNRWA, and the State Department supports it. This, in spite of the fact that, under U.S. law, a person who has citizenship in the country where he resides, and enjoys the protection of that state, cannot lawfully be eligible for refugee status.[3] How can State justify this contradiction?

Here is a second example: Another two million Palestinians already settled in the West Bank and Gaza, and who, by their own account, lived in the declared Palestinian state as its citizens under a Palestinian government, are registered as "refugees" by UNRWA.[4] By American legal standards, these Palestinians are "firmly settled" and therefore ineligible for "refugee" status [5]. Further, according to American policy reaffirmed by three Presidents, these Palestinians already reside in their own future state, the place where Palestinian refugees aremeant to be settled.[6] Yet the State Department supports UNRWA's decision to count two million Palestinians well established in the West Bank and Gaza as "refugees," too.
Here is a third example: Under U.S. laws and regulations, only an individual who was personally displaced, or is a spouse or an underage dependent of such an individual, can be eligible for refugee status or derivative refugee status.[7]
Grandchildren and great-grandchildren are specifically not entitled to inherit refugee status merely because their ancestor was a refugee.[8] But under UNRWA practices, any descendant of a male refugee, no matter how many generations and decades have passed, is automatically entitled to be counted as a "refugee."[9] More than 95% of today's UNRWA "refugees," in fact, were not even alive when Israel was born in 1948; were never personally displaced by Israel's creation, and are listed by UNRWA as "refugees" only because of this peculiar practice of inheriting refugee status as a birthright .
Amazingly, the State Department defends all this, sometimes with great specificity. In response to critics of the descendancy principle, for example, the State Department recently reported, with approval, that UNRWA is not the only UN agency following this inheritance rule; the United Nations High Commissioner for Refugees (UNHCR) occasionally does, as well.
State Department spokesman Patrick Ventrell told Foreign Policy magazine on May 25, 2012, "For purposes of their operations, the U.S. government supports this guiding principle."[10] (State ignores that UNHCR grants inherited refugee status only occasionally and as a special exception, while UNRWA treats it as the normal practice, justifying 95% of its "refugee" designations.)
The State Department is also inconsistent. If UNHCR were its standard, State would reject UNRWA's practice of counting Jordanian citizens as refugees. In not a single case does UNHCR count a person with citizenship as a refugee, while 40% of UNRWA's registrants are citizens of Jordan. In fact, UNHCR's authorizing statute, and the Refugee Convention that undergirds the agency, both explicitly forbid continuing "refugee" status when a person attains citizenship.[11] UNRWA's authorizing document does not.
State is sanguine even about the fact that these UNRWA practices steadily inflate the number of alleged Palestinian refugees year after year, from 750,000 in 1950 to more than 5 million today, a sevenfold increase. "In protracted refugee situations, refugee groups experience natural population growth over time," State cheerfully affirmed in 2013.[12]
The State Department has shown that it will resist any change in its policy toward the UNRWA practices that exacerbate and perpetuate the refugee problem. When Senator Mark Kirk introduced an amendment to the 2013 State Department Appropriations bill to force the Department to change, Deputy Secretary of State Thomas R. Nides fiercely objected:[13] "Legislation which would force the United States to make a public judgment on the number and status of Palestinian refugees would be viewed... as the United States acting to prejudge a final status issue and determine the outcome."
This is the same State Department that, on more than 20 occasions during the Obama years, has ferociously and publicly castigated the government of Israel for constructing homes in disputed areas of Jerusalem and the West Bank, also a final status issue to be resolved between the parties. Apparently more Israeli homes hurt peace, but multiplying the number of refugees is fine.
Nides said that any divergence from UNRWA's rules would "hurt our efforts to promote Middle East peace, ....undercut our ability to act as a mediator and peace facilitator, ... damage confidence between the parties, [and]...hurt our efforts to prevent the Palestinians from...pursuit of statehood via the United Nations." He continued that it would also "generate very strong negative reaction" because this is "one of the most sensitive final status issues" that "strikes a deep, emotional, chord," especially at this "particularly fragile...[and] sensitive time." It would, he claimed, "be seen as a diminution of support for the Palestinian people" and "put at risk the humanitarian needs of this large, poor, and vulnerable refugee group." And, he added, it would "risk a very negative and potentially destabilizing impact on key allies, particularly Jordan."
This frightening Parade of Horribles was assembled by the State Department bureaus to scare away a compromise amendment that would leave UNRWA intact as a social service delivery agency, remove not one person from its beneficiary rolls, and cut not a dime from its budget. All the amendment had said, in effect, was that the UNRWA beneficiaries may be needy people deserving of assistance, but they are not "refugees." Yet those are the words State cannot bear to be uttered.
The government of Israel would agree with Nides' that "UNRWA serves as an important counterweight to extremist organizations such as Hamas and Hezbollah" and that "any void left by UNRWA would be likely be filled by terrorist elements." But supporting UNRWA's schools and hospitals, and its stabilizing role, does not require that the United States government continue to call UNRWA beneficiaries "refugees" when they are not. UNRWA's own Consolidated Eligibility & Registration Instructions do not require UNRWA beneficiaries to be classified as "refugees"-- its Section III.A.2 and Section III.B create classes of UNRWA beneficiaries not registered as "refugees" but who are nonetheless eligible for UNRWA services.[14]
The sad reality is that the United States' Department of State does not want such simple reforms. The U.S. State Department has, instead, chosen instead to act as UNRWA's patron and the protector of its mission, perpetuating and expanding the refugee issue as a source of conflict against Israel.

Steven J. Rosen is Director of the Washington Project of the Middle East Forum.