Is Watered Down Corker-Menendez Bill A Concession To Obama Or Victory For Congress? Media Claims Latter

The Israel Project sent out an email today on the messaging battle that is going on between the White House and the Senate over the Obama administration dropping its threat to veto the Corker-Menendez bill, legislation that would boost Congressional oversight over any Iran deal.


Spokesman Josh Earnest made the announcement at yesterday's press briefing, just as the Senate Foreign Relations Committee was convening for what would be a 19-0 vote in favor of the bill. The declaration reversed months of explicit administration threats to veto legislation that would give Congress an expanded voice in Iran negotiations.

The White House spin was that Corker-Menendez had been substantively hollowed out by a morning compromise between Sens. Corker and Cardin, so that had become acceptable. The bills' supporters countered that the core oversight requirements remained intact, and that the administration caved because it knew a veto would be overridden. Corker on Twitter: "The simple fact is that the White House dropped its veto threat because they weren’t going to have the votes to sustain a veto" [1]. 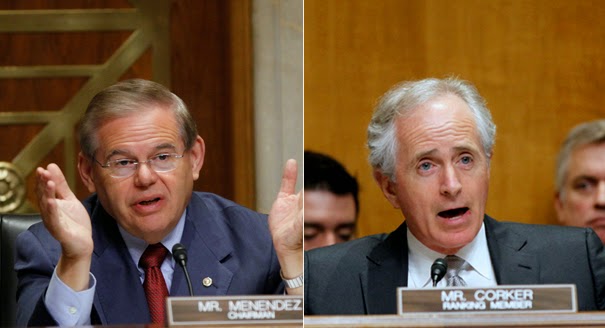 The subsequent news cycle did not reflect the White House's messaging:

Even the New York Times editorial board, which was very unkind to the Senators, read the politics in a way that cut against the White House's messaging: The committee’s action gives momentum to those who have bitterly criticized Mr. Obama for negotiating with Iran... Mr. Obama initially threatened to veto the legislation, but he backed off rather than face a bipartisan override of his veto. [6] The next step on the Senate side is for the bill to be brought to the floor, where there will be an amendment process and then a vote. On the House side, lawmakers will have to craft parallel legislation, but The Hill reported last nigtht that Democrats are already jumping on board so the process is likely to be quick [7].


At issue is how easily the will of Congress can be blocked, based on how the Menendez-Corker bill has been formulated:


As the editors of The Wall Street Journal analyzed it, “The majority could offer a resolution of disapproval, but that could be filibustered by Democrats and vetoed by the President. As few as 41 Senate Democrats could thus vote to prevent it from ever getting to President Obama’s desk—and 34 could sustain a veto. Mr. Obama could then declare that Congress had its say and ‘approved’ the Iran deal even if a majority in the House and Senate voted to oppose it.”

If so, Obama lost nothing by his "concession" to Congress. And he knows it.


Technorati Tag: Iran and Obama and Congress and Menendez-Corker.