A couple of weeks ago, Israeli Defense Minister Liberman offered to provide Gaza with a huge level of assistance in return for Hamas shutting down their rocket attacks and closing their attack tunnels. In return, senior Hamas leader Mahmoud al-Zahar turned down the offer, claiming that if Gaza wanted to be like Singapore, it would have already done so.


The larger part, still untold in all its detail, is of the astounding social and economic progress made by the Palestinian Arabs under Israeli "oppression." At the inception of the occupation, conditions in the territories were quite dire. Life expectancy was low; malnutrition, infectious diseases, and child mortality were rife; and the level of education was very poor. Prior to the 1967 war, fewer than 60 percent of all male adults had been employed, with unemployment among refugees running as high as 83 percent. Within a brief period after the war, Israeli occupation had led to dramatic improvements in general well-being, placing the population of the territories ahead of most of their Arab neighbors.

...During the 1970's, the West Bank and Gaza constituted the fourth fastest-growing economy in the world-ahead of such "wonders" as Singapore, Hong Kong, and Korea, and substantially ahead of Israel itself.[emphasis added]


the Palestinian territories had one of the ten fastest growing economies during the 1970's, just behind Saudi Arabia (which benefited from the oil shock of 1973), and ahead of Singapore, Hong Kong and South Korea.

What both Karsh and CAMERA write is substantiated by the World Bank.

In 1993, The World Bank published Developing the Occupied Territories: The Economy

According to the World Bank report (paragraph 2.3):


This picture of crisis contrasts sharply with a longer-term view of past development. The Occupied Territories [OT] were among the top ten fastest growing economies in the world during the 1970s period when measured in terms of GNP growth (Figure 2). The expansion in GDP per capita was somewhat lower, but was still large by international standards. 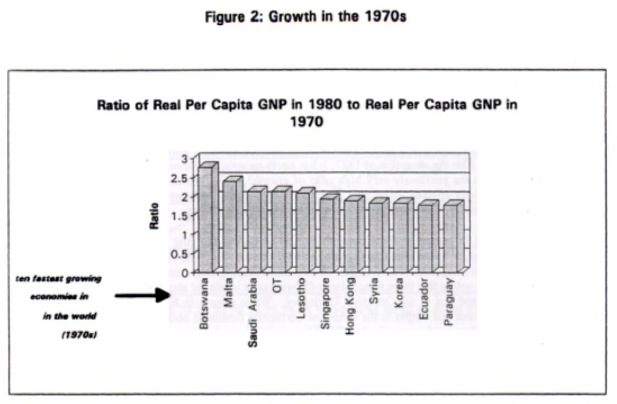 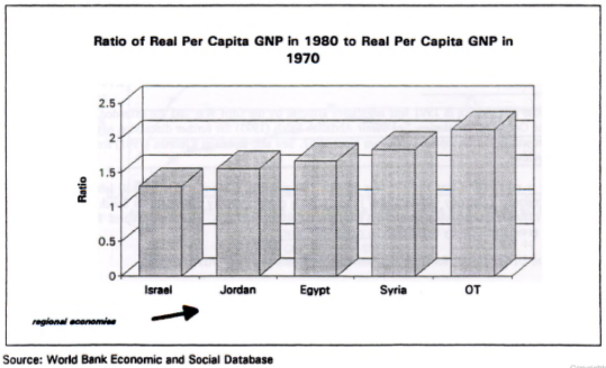 That all came to an end with the Intifada -- but not quite.

In March 1995, the Israel Ministry of Foreign Affairs suggested Soon The Gaza Strip Will Be Competing with Singapore, thanks to


industrial parks which the leadership of the [Israeli] Foreign, Industry and Finance Ministries is planning at this very moment, under total secrecy. The goal: to establish between 8 to 11 such parks on the cease-fire line between Israel and the autonomous areas, which the Palestinian Authority will control within the next few months.

Foreign Minister Shimon Peres is the one who envisioned all this, and those close to him say with pride: We are getting closer to Singapore, Taiwan and Hong-Kong, in huge steps.

And then, after the vision arrives to develop the cities Gaza, Dir Al- Balah, Ofakim and Sderot it will be copied in the cease-fire line between Afula and Jenin, to Mt. Hebron and Tul-Karm, and will reach the entrance of Kochav Yair.

Each industrial park will be established for about 10,000 employees, and will sit on 2,000 dunam of land, with considerable financial assistance from foreign investors and also governmental subsidies. The Palestinians will run them, and be its workers, for the most part.

None of that came to pass.

And now Hamas says with pride not only that it has no interest interest in becoming another Singapore, but that if it really wanted to, it could do it without any help from Israel.


Technorati Tag: Israel and Gaza and Hamas and Singapore.