As has been pointed out before, in 1994 when Mohammad Abequa and his wife were going through a divorce, Abequa committed an "honor killing" and fled to Jordan.

Once he was there, Jordan


Jordan Gets One Right


In 1993, Eyad Ismoil helped Ramzi Ahmed Yousef, the mastermind of the World Trade Center bombing, by driving a van packed with explosives into the garage below the Trade Center. That evening, Ismoil fled to Jordan. The US could not arrest him until King Hussein of Jordan signed an extradition treaty with the United States in 1995. Not only was the US then able to extradite Ismoil, the US agents were permitted to personally land on Jordanian soil, where the terrorist was handed over to them


Today, the word is that the extradition treaty signed by King Hussein of Jordan is no long in effect under his son King Abdullah. The high court of Jordan claims the reason is because the extradition treaty was never ratified by the Jordanian Parliament. Since we know Ismoil was extradited, we know this means either that this is not true and there was a valid treaty, or that for all intents and purposes the extradition was done under the authority of the king -- which at the time was sufficient.

Either way, nothing prevents Jordan from having Ahlam Tamimi tried in a specialized Jordanian court, a policy that Jordan has pursued in the past.

Tamimi had also been hosting a weekly television show broadcasted on Hamas’s satellite station, where she continued to support terrorist attacks -- until September 2016, when she suddenly stopped hosting the show, possibly because she was tipped off about the US indictment and quit her show in order to be less high-profile.

It is because Tamimi had been actively inciting against Israel that she has broken the condition of her release in 2011 and therefore can be retried in a US court without an incurring double jeopardy.

Caroline Glick writes that it is time to test Jordan's King Abdullah:


...Zahran, who seeks to replace the Hashemites with a Palestinian majority regime, which would allow Jordan to serve as the national home of the Palestinians in Judea and Samaria, argues that Jordan is a state run by the military and intelligence services, which themselves are controlled by the US military’s Central Command.

In his words, Jordanian forces cannot “relocate an armored vehicle” without first getting “permission from US Central Command.”

... it is time for the US and Israel to test Abdullah, the moderate man we cannot do without.

The first test should be an ultimatum. Abdullah should be told that he must either extradite Tamimi to the US for trial or send her back to Israel to serve the remainder of her sentence. If he refuses, then either Prime Minister Benjamin Netanyahu or US President Donald Trump, or both, should meet publicly with Zahran to discuss his vision for the future of Jordan. 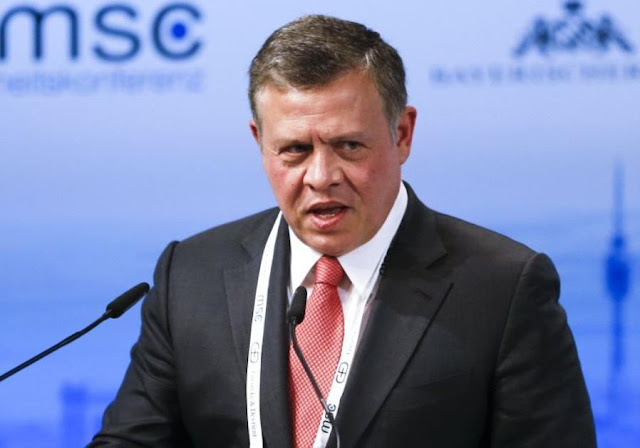 It is all very well for Trump to seek to create a coalition in the Middle East to counter the instability caused by Iran and its drive to expand its influence.

Trump has spoken often about putting America first.
Having Jordan extradite the terrorist who murdered an American citizen would be a good start.

it below. Thanks!
Technorati Tag: Jordan and Ahlam Tamimi and terrorism and extradition and King Abdullah and Trump.