No One Would Call Anyone "Palestinian" Today Without Balfour

We know that historically, there has never been a sovereign, Palestinian state.

But if there has never been a state, a country, called Palestine -- then what did the Arabs call themselves when that territory was under Muslim rule?

The name [Palestine] survived briefly in the early Arab Empire, and then disappeared. The Crusaders called the country the Holy Land and their state the Kingdom of Jerusalem After the end of the ancient Jewish states, the capital of the administrative districts called Palestine were not in Jerusalem but elsewhere, in Caesarea, in Ramleh, in Lydda, in various other places The only time between the ancient and modern Jewish states when Jerusalem was the capital was the Crusader Kingdom, the Latin Kingdom of Jerusalem as it was called. And that was a comparatively brief interlude. [emphasis added]

When Arabs today call themselves Palestinians, that is a new phenomenon. For centuries, the name "Palestine" had fallen into disuse and had actually disappeared altogether.

A secondary point Lewis raises is that outside of the crusaders, the city of Jerusalem was considered a capital only 2 times in history: as the capital of ancient Israel and of the modern reestablished state of Israel.

Jerusalem has never been the capital of an Arab territory, despite being the "3rd most holy" place in Islam, directly contradicting the current claims to East Jerusalem made by Abbas and by UNESCO.


Even the adjective Palestinian is comparatively new. This, I need hardly remind you, is a region of ancient civilization and of deep-rooted and often complex identities. But Palestine was not one of them. People might identify themselves for various purposed, by religion, by descent, or by allegiance to a particular state or ruler, or  sometimes locality, But when they did it locally it was general either the city and immediate district or the larger province, so they would have been Jerusalemites or Jaffaites or the like, or Syrians, identifying either the larger province of Syria, in classical Arabic usage, Sham

While the name "Palestine" is the one that Rome assigned in order to erase the Jewish connection to the land, that name "Palestine" was itself forgotten as well. Using the name Palestine today is itself a modern anomaly in a land of ancient and deep-rooted history. Those who lived in the land during the Ottoman occupation of the land did not call themselves Palestinians -- that is something that would come later, in the 20th century.

If not as Palestinians, then how did the Arabs in the identify themselves?

In The Case for Israel, Alan Dershowitz explains:


Under Ottoman rule, which prevailed between 1516 and 1918, Palestine was divided into several districts, called sanjaks. These sanjaks were part of administrative units called vilayets. The Largest portion of Palestine was part of the vilayet of Syria and was governed from Damascus by a pasha, thus explaining why Palestine was commonly referred to as southern Syria. Following a ten-year occupation by Egypt in the 1830s, Palestine was divided into the vilayet of Beirut, which covered Lebanon and the northern part of Palestine (down to what is now Tel Aviv); and the independent sanjak of Jerusalem, was covered roughly from Jaffa to Jerusalem and south to Gaza and Be'er Sheva. It is thus unclear what it would mean to say the the Palestinians were the people who originally populated the "nation" of Palestine [italicizes in original].

The map below, published by Carta, illustrates the division of the land in the 1830s as described by Dershowitz:


There were no set boundaries to Palestine, which is what you would expect when there was no political, sovereign state -- just another Ottoman territory.

So if the name "Palestine" was forgotten for centuries, who revived the name -- thus making it possible for the Arabs to take the name Palestine and Palestinian for their own?

Instead of Abbas demanding an apology from Great Britain for the Balfour Declaration, he and all of those who want to call themselves "Palestinians" owe a debt of gratitude to the British. After the Arabs had long forgotten the name "Palestine" it was the British, whose Mandate was based on the Balfour Declaration, who themselves re-established the name of Palestine.

Just as the British re-established the name Palestine as the name for land, it was naturally used for coins and stamps: 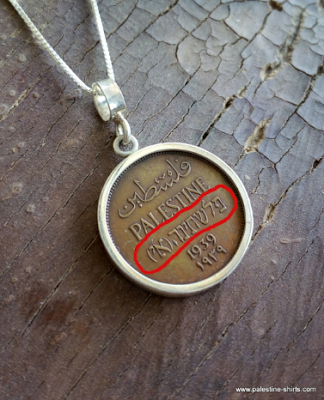 This was during the time of the British Mandate.
But what about during the 400 years of the Ottoman Empire preceding it?

According to the Encyclopedia Judaica


Both Turkish and European coins circulated in Erez Israel during Ottoman rule. Tokens issued by various communities, such as the Jews and the German Templers, and by some business firms, were also in circulation...granted special rights to some European powers and resulted in French gold napoleons and Egyptian coins being brought into circulation alongside Turkish coins (5:723)

Contrast this multiplicity of currencies and the lack of an official local currenciy with the situation that developed under the British:


On the British occupation of Palestine, the Egyptian pound was made legal tender in the territory. It was replaced in 1927 by the Palestine pound...the designs, prepared by the Mandatory government, were intended to be as politically innocuous as possible, the only feature besides the inscriptions being an olive branch or wreath of olive leaves. The inscriptions were trilingual, giving the name of the country, Palestine, and the value in English, Hebrew, and Arabic. As a concession to the Jewish community, the initials "Alef Yud" ("Erez Israel") appeared in brackets following the name Palestine. (5:723-4)

The only coins ever minted with the name "Palestine" on them were the ones issued during the British Mandate while it governed that territory under the authority granted it by League of Nations. No coins with the name Palestine were ever minted before then. There was no reason to, since there was no country called Palestine and no Palestinian identity.

In his book, Islam in History: Ideas, People, and Events in the Middle East And the Jews has a chapter on "Palestine: On the History and Geography of a Name" Lewis notes that the name Palestine has a very different meaning for Arabs and Jews:


It [the name Palestine] had never been used by Jews, for whom the normal name of the country, from the time of the Exodus to the present day, was Eretz Israel. It was no longer used by Muslims, for whom it had never meant more than an administrative su-district, and it had been forgotten even in that limited sense. [Hat tip Martin Kramer]

The British use of the name Palestine was a convenience, renewing a word that held no special meaning for Arabs and had fallen into disuse. The Arabs went along with the British usage. The Jews on the other had not only historical but indigenous roots to the land, spanning 3 millennia. They preserved that connection wherever they could by incorporating the ancient name, whenever the official name Palestine was used.

Without the Balfour Declaration, and the British Mandate that was based on it, the name Palestine -- which had been forgotten in the region -- would have continued to be forgotten.

But Jews will always have Eretz Yisrael.