Back in July, when Palestinian Arabs protested against the use of metal detectors to secure and protect visitors to the Temple Mount from terrorist attacks, Walter Russel Meade made an interesting point. He noted on his website, The American Interest, the key role Palestinian terrorism has played -- not only in the innovation and development of terrorist strategies, but also in the effort to protect against them:


With the possible exception of al-Qaeda, Palestinian terrorism—which pioneered the use of plane hijackings, airport attacks, and suicide bombings—has perhaps done more to force the introduction of metal detectors into our daily lives than just about any other cause.

While plane hijackings in the 1970's were just as easily associated with Cuba as with the Palestinian Arabs, it was the latter that pushed the US to increase security on airplanes.


In September 6th and 9th in 1970, 5 planes were were hijacked by members of the Popular Front for the Liberation of Palestine (PFLP). Of the 5 airliners, 3 of them were forced to land at Dawson's Field, located near Zarka, Jordan.

His chief of staff, H.R. "Bob" Haldeman, recorded in his diary on September 7, 1970, that Nixon was "very anxious to develop some dramatic administration action about hijackings, need tough shocking steps, especially guards on planes."

Nixon responded to the trio of hijackings in a written statement listing seven steps to combat "air piracy." Beyond the air marshals, he called on foreign governments to join the United States in combatting hijackings and ordered electronic surveillance at airports to spot potential terrorists.

Nixon also envisaged that the 100 initial air marshals would eventually grow to a force of thousands. But over the ensuing years, as the threat from hijackings receded, the force never reached full capacity.


On September 11, Nixon responded to the Palestinian hijackings with a program on dealing with the problem.


I have directed the Departments of Transportation, Treasury, and Defense, the Central Intelligence Agency, the Federal Bureau of Investigation, the Office of Science and Technology, and other agencies to accelerate their present efforts to develop security measures, including new methods for detecting weapons and explosive devices. At the same time, the Departments of Defense and Transportation will work with all U.S. airlines in determining whether certain metal detectors and x-ray devices now available to the military could provide immediate improvement in airport surveillance efforts. To facilitate passenger surveillance, appropriate agencies of the Federal Government will intensify their efforts to assemble and evaluate all useful intelligence concerning this matter and to disseminate such information to airlines and law enforcement personnel. (emphasis added)

Metal detectors, which decades later Palestinian Arabs would protest as an impediment, were first deemed necessary as a result of Palestinian terrorism.

Nixon reiterated this point later that month, while speaking to some of the released Americans who had been held hostage 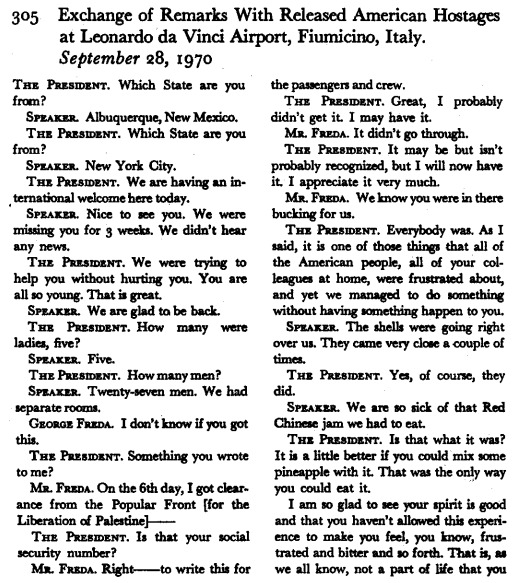 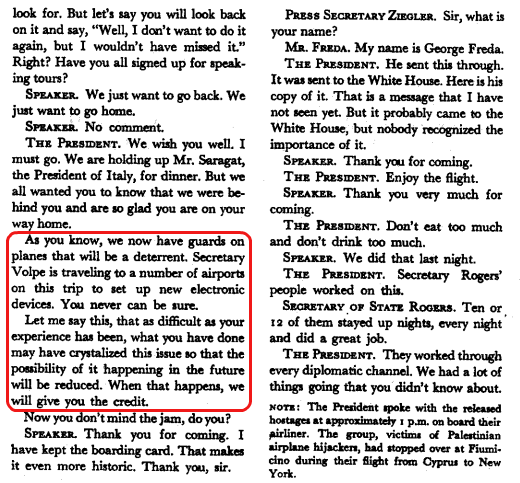 Again, in speaking to the released hostages, Nixon emphasized that in addition to the newly instituted air marshals, "new electronic devices" would be put in place as well.

Times have changed since then, in ways that Nixon could never have imagined.

The years during which Palestinian Arabs terrorized the airways have been forgotten. Who today remembers that the tools used now to secure travelers against terrorist attacks were originally developed to protect them against Palestinian terrorists.

Instead, the only irony greater than the attempt to used those security devices on Palestinian Arabs is their protest that such tools impinge on their rights.

Nixon may not have foreseen these developments, but he did try to prevent them.