Ilhan Omar was at the center of the news last week, amidst her antisemitic tweets and her attack on Elliott Abrams.

Yet despite what her tweets condemning AIPAC and her false claim that it pays off government officials, Omar's own history of violating and abusing the rules governing receiving money -- and having to return it -- has received scant attention.

Minnesota Democratic-Farmer-Labor congressional candidate Ilhan Omar said Monday that she will return $2,500 in college speaking fees that she accepted in violation of Minnesota House of Representatives rules.

Omar was elected to the Minnesota House of Representatives in November 2016. She had agreed to speak at the events before she was sworn into office in January 2017 and did not know the rules for an elected official would apply to her, she said, according the Star Tribune. [emphasis added]

AP confirms that Omar did in fact return the money.

Omar claims she did not know the rules, but if so, it wasn't for lack of being told that it was against the rules. The website from the Minnesota State House website reports on State Representative Steve Drazkowski (Republican), who revealed Omar's violation:


Drazkowski said Omar clearly violated rules that are in place to prevent payment to a member from an organization that has business before the Legislature. According to Minnesota House Rule 9.20, Acceptance of an Honorarium by a Member: A member must not accept an honorarium for a service performed for an individual or organization that has a direct interest in the business of the House, including, but not limited to, a registered lobbyist or an organization a lobbyist represents.

Rep. Omar voted to adopt the Permanent Rules of the Minnesota House – which includes Rule 9.20 - on February 16, 2017, 12 days before her first paid MNSCU speaking engagement.

In addition, Drazkowski noted every newly-elected member attends an orientation where non-partisan House research staff explains potential conflicts of interest to incoming lawmakers, including gifts, travel and lodging, and honoraria.

And there were other issues with Omar's less than stellar transparency on her finances:
That last point, that Omar filed her Statement of Economic Interest late is important. It helped Omar avoid the consequences for her financial violations:


Omar was able to avoid a potential House Ethics Committee hearing into her financial misdeeds because the Legislature had adjourned sine die (with no appointed date for resumption). The late filing also prevented bad publicity or any other conflicts that could have arisen during the DFL endorsement to replace outgoing Congressman Keith Ellison.

How did Ilhan Omar conduct her successful campaign for the US House of Representatives?

Sunday, August 5, 2018: Hussam Ayloush, Executive Director of CAIR-California posts on Facebook that Ilhan Omar, campaigning for Democratic Representative of Minnesota, will attend 3 CAIR sponsored events -- in California. It's just like the lady said: "It's all about the Benjamins, baby."

But something funny happened in between Omar speaking at 3 CAIR events and then receiving a $5,000 donation from CAIR... 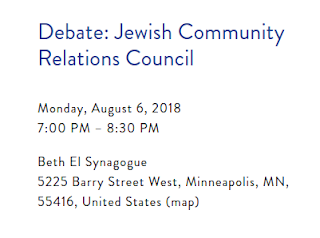 But while Omar claimed she would "share our vision" as it turned out, Omar's "vision" was a little bit blurry that day. According to Haaretz, the reaction was that Omar was less than straightforward, in light of her later public support for BDS:


This seemed like a bait-and-switch to many Jewish Minnesotans: When she was asked at an August primary debate held in a synagogue to specify “exactly where you stand” on BDS, Omar said that BDS was “not helpful in getting that two-state solution” — never explaining that she in fact supported the policy. [emphasis added]

Does anyone think that Omar was equally evasive in her 3 CAIR-arranged appearances in California to collect donations?

In an article in the Algemeiner, Morton Klein, national president of the Zionist Organization of America, describes the degree to which Ilhan Omar Is Funded by Israel-Hating BDS Promoters and PACs in the 2018 election:
Putting it all together, we see that:
Last year, Drazkowski said:

Omar's antisemitic comments last week come from someone with a record for violating both the rules and the trust of her constituents.

But in terms of real consequences, Ilhan Omar has so far received nothing more than a slap on the wrist -- and an appointment to the House Foreign Affairs Committee, where she behaved exactly as we would expect.