This post originally appeared on Elder of Ziyon on July 10, 2019

With the presidential campaign heating up and Democratic support for Israel apparently ebbing, the radical left-wing group IfNotNow has now reformed itself as a 501(c)(4) and is out raising money.


“Our focus is going to be trying to push the candidates past giving lip-service to a two-state solution,” said IfNotNow co-founder Emily Mayer, “without recognizing the underlying dynamics and explicit moves by the Israel government that are creating a one-state reality where Palestinians are denied basic rights.”

The organization is also taking a page out of the playbook of groups such as Black Lives Matter and the American Civil Liberties Union: It plans to “bird-dog” presidential candidates at public events to create viral moments and prod the Democratic Party leftward on the issue of Israel.

In a MoveOn.org PDF on how to do bird-dogging, MoveOn.org describes it as

a great tactic used to directly engage or confront candidates and MoCs [Members of Congress] on our issues at their public events. It lets them know how important these issues are to everyday constituents. The goal of bird-dogging is to put tough questions to MoCs and force them to answer when they are in front of their constituents, voters, and the media.

Bird-dogging can be used to make sure MoCs can’t escape answering questions about important issues and to ensure that we are setting the terms of the debate.

MoveOn.org's playbook provides a checklist on how to prepare for bird-dogging.

Ask a yes-or-no question, not an open-ended question. Your goal is to get your member of Congress on the record about a critical issue. Here are some example questions:


■ “Do you understand that by voting to take away the Affordable Care Act, you are taking away my health care?”
■ “Can my fellow constituents and I count on you to vigorously oppose any cut to Medicare, including privatization, which would threaten my ability to retire?”

The goal is supposed to be to push the Democratic candidates to take more left-wing positions against Israel, clarify their stands and draw public attention to the changing attitudes of the Democratic Party. In the Politico article, Emily Mayer -- a co-founder of IfNotNow -- considered Biden and Booker out of sync with the Democratic base on Israel.

IfNotNow started off with an easy one.

They caught up with Bernie Sanders while he was campaigning in New Hampshire. Considering the fact that Sanders has called Prime Minister Benjamin Netanyahu’s government “racist,” getting the candidate to back their cause in condemning Israel was not going to be a problem 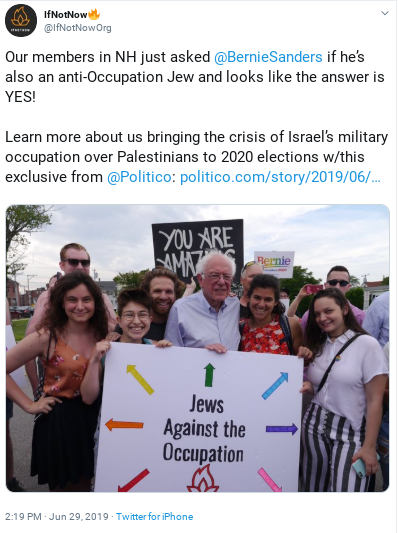 Not much of a challenge. 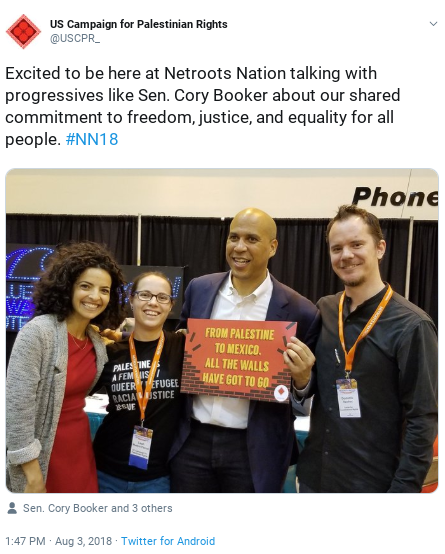 At the time, Booker claimed that he misunderstood the sign and thought it just had to do with Mexico. Since that time, Booker has continued to support Israel.

In Sanders' case, he didn't have to say a word. So the "confrontation" with Sanders was actually nothing more than a photo-op.

But their next target was Elizabeth Warren.

Here are some snapshot excerpts of the 73-second polished video that went on Twitter, with the headline that

Sen. @eWarren says she’d push Israel to end its occupation of Gaza and the West Bank 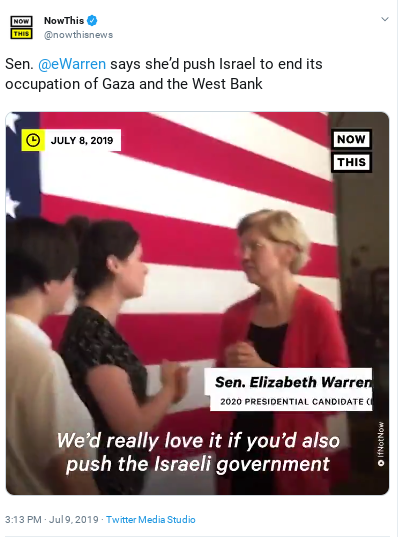 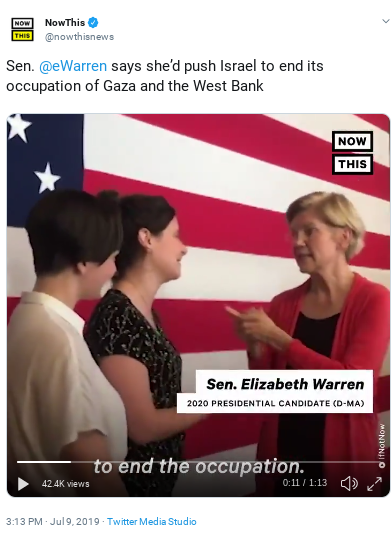 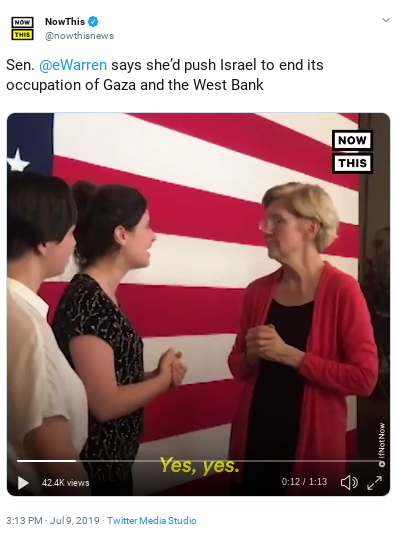 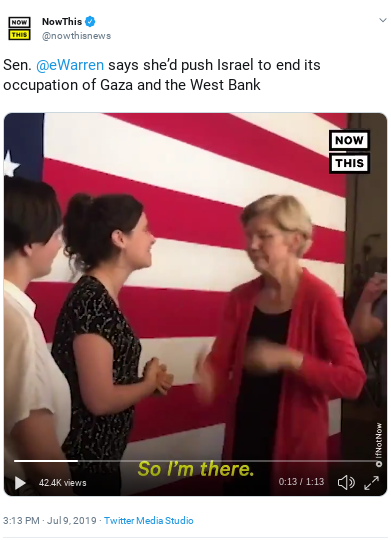 If you do a search online, you'll find there are all kinds of headlines now proclaiming that Warren has promised to end the "Israeli occupation."

But is that really what happened?
They did not pin Warren down with a yes-no question.

All they did was gush all over her and say "We'd really love it if you also pushed the Israeli government to end the occupation"
What they got in return was "Yes. Yes. So I'm there."

IfNotNow tried to capitalize on all this with a press release:


In the past, Warren has regularly spoken of Israel as a strong ally in a tough neighborhood and has appeared at AIPAC events and used right-wing talking points. But as her career has gone on, her views on the issue have grown to be farther in line with her progressive values: She was one of the 60 Democrats to boycott Netanyahu’s speech in Congress, she supported the Iran Deal, spoke out against the Embassy move, and opposes efforts to criminalize the BDS movement.

Down the road, they may try to pin Warren down to specifics, but it's not clear what she said in the first place. Considering all the billion-dollar plans Warren is going around promising, saying yes to a vague question is not likely to cause her problems down the road.

Did Warren even pay serious attention to what they were saying?
Here is what happened, without the window dressing from the original 16-second video:


Two kids gushed about how much they admired Elizabeth Warren and she shepherded them into a photo op and quickly sent them on their way.

Considering the Democratic presidential field, IfNotNow is not likely to corner anyone who is not more than willing to agree on the issue of occupation.

On the other hand, if they instead ask more pointed questions that address other more controversial issues like the Gaza "protests", then we may see sparks fly.

The candidates are unlikely to be prepared for the simplistic one-sided questions that IfNotNow may soon be throwing at them.

While the media has made a point of not pinning down the candidates on how they plan to pay for the numerous plans they are proposing, the candidates may soon find themselves being held responsible for the stands they claim to take on Israel.

That may not be such a bad thing.

Email ThisBlogThis!Share to TwitterShare to FacebookShare to Pinterest
Labels: Elections, Elections 2020, If Not Now