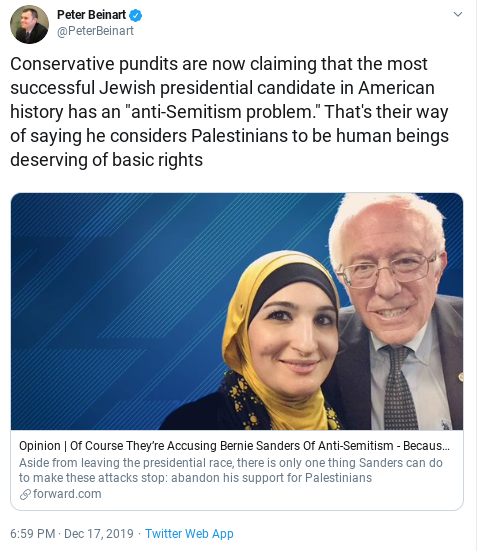 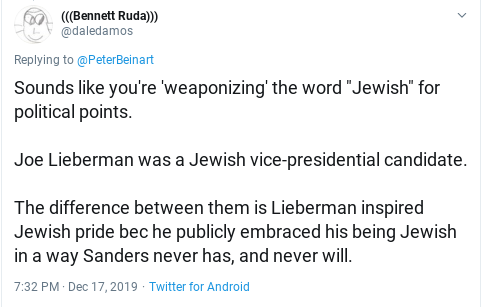 There were a few responses to what I wrote, but they avoided the question of whether Bernie Sanders actually embraces his being Jewish. Instead, they attacked Lieberman -- totally missing the point.

The fact is that Bernie Sanders, despite the best efforts of Beinart and others, has not registered as a Jew in the minds of voters.


Sen. Bernie Sanders has gone further than any other Jewish candidate in a presidential campaign, but he’s not garnering much support from Jewish voters, polls indicate...

Now that the campaign has moved to New York, however, which has the nation’s largest Jewish population, the numbers are in, and they’re not favorable.

That shouldn’t be terribly surprising. Both Hillary Clinton and former president Bill Clinton have long been popular among Jewish voters, and while American Jews tend to be liberal, they’re more often regular Democrats than the sorts of independents most drawn to Sanders.

On the other side, Sanders is not actively engaged in Jewish life. He has also been critical of Israel, although he lived briefly as a young man on a secular, socialist kibbutz. When asked about his faith, his responses have reflected a generalized commitment to liberal concepts of social justice as opposed to any specific link to Jewish ideals of equality. [emphasis added]

Putting aside where he stands on Israel, the fact remains that Sanders is not Jewishly involved and his inspiration is from socialism, not Judaism.

That is not a judgment on Sanders, just a recognition of where he stands.

In a presidential election pitting Sanders and Trump, Sanders would clearly get the majority of the Jewish vote, but that is because most Jews vote Democrat anyway and not because they think of him as a Jew.

Not only does he not embody Jewish pride, Sanders does not have a typical reaction to antisemitism either. At an event at the Apollo Theater in New York in April 2016, Sanders faced an antisemitic question:

“No, no, no, that’s not what you’re asking,” Sanders quickly replied, in a nod to the question’s underlying prejudice. “I am proud to be Jewish,” he declared, to cheers from the audience. But then Sanders did something odd. Rather than using the question as a teaching moment to address and rebuke its anti-Semitic underpinnings, Sanders instead immediately pivoted to his stump speech on the Israeli-Palestinian conflict. “Talking about Zionism and Israel,” he said, “I am a strong defender of Israel, but I also believe that we have got to pay attention to the needs of the Palestinian people.” He never challenged the actual contents of the question, let alone labeled it anti-Semitic. [emphasis added]

It is tempting to compare Sanders' failure to address the clear antisemitism of the questioner with his making Linda Sarsour his surrogate. This is the same Linda Sarsour who in 2015 spoke at a Farrakhan rally. Then again, Sanders has met publicly with antisemite Al Sharpton. 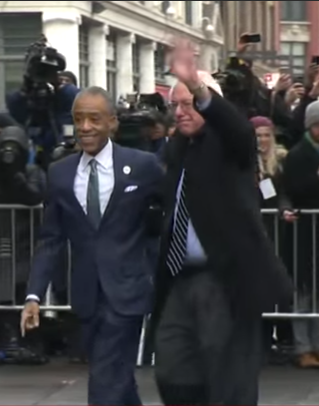 But that Sanders-Sarsour connection really is especially jarring.

And, as Ron Kampeas points out, that alliance of Sanders and Sarsour is self-contradictory as well.


Ask them this, how can you be against white supremacy in America and the idea of being in a state based on race and class, but then you support a state like Israel that is based on supremacy, that is built on the idea that Jews are supreme to everyone else?” [emphasis added]

Kampeas then points out that:


[Sanders] notes the time he spent in Israel as a young man and says “It is true that some criticism of Israel can cross the line into antisemitism, especially when it denies the right of self-determination to Jews, or when it plays into conspiracy theories about outsized Jewish power. I will always call out antisemitism when I see it.” [emphasis added]

This leads Kampeas to the point:


Is there wiggle room to reconcile Sarsour’s rejection of a “state like Israel that is based on [Jewish] supremacy” and Sanders’ label for those who deny “the right of self-determination to Jews” as antisemites?

This is an issue that does not seem to bother Sanders.

It seems there is an attempt to not only redefine what is and is not antisemitism, but even to redefine what it means to be a Jew -- something that no other minority has to put up with.

Maybe it is an attempt to redefine the connection between Jews and Israel, in the way that small radical fringe groups like If Not Now try to do.

But whatever the reason, this attempt to sell Sanders as a symbol of Jewish pride is a symptom of the weakening of Jewish identity in general and the problematic connection of Jews in the US with Israel.