Nearly seven months after the bus bombing in Bulgaria that killed six Israeli tourists, the Bulgarian government is set to announce that "all roads lead to Lebanon" in the strongest sign yet that Hezbollah was the key perpetrator behind the attack.

The Commentator has exclusively learned that today, the Bulgarian government will implicate, though likely not name the terrorist group Hezbollah in its report on the 2012 bus bombing that has been the subject of much speculation over the past six months.

The Commentator has learned that both the German and French governments have both piled pressure on the Bulgarians to "use nuanced language" in the report, for fear that Bulgaria may be the focus of future attacks if Hezbollah is openly named.

The Bulgarian government, it has been stated by leading sources, has been informed through ‘back channels’ that there will be serious repercussions from Hezbollah if it is to publically and overtly name the group. This information comes despite strong pressure from the US government to make clear that the bombing was indeed the work of the Lebanese terrorist outfit. 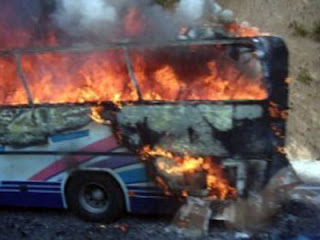 Retaliation against Bulgaria is not the only concern that has created resistance to the Bulgarian report.

France, for instance, has already been clear that even if Hezbollah should be named as the terrorist group that murdered civilians on European soil -- the time might still not be right to take the step of putting Hezbollah on the list of known terrorist groups. Part of France's reluctance may be the fear that their troops in United Nations Interim Force in Lebanon (UNIFIL) may be put in danger.


While the group [Hezbollah] is believed to operate all over the Continent, Germany is a center of activity, with 950 members and supporters last year, up from 900 in 2010, Germany’s domestic intelligence agency said in its annual threat report.

At stake is more than just ammunition to apply pressure on Hezbollah by preventing them from raising money in Europe. The New York Times notes that Hezbollah and Iran Blamed in Bombing, and therefore:


The U.S. and European governments also are expected to cite the study in their efforts to tighten economic sanctions against Iran, both because of its nuclear program and Tehran's alleged support of international terrorist groups.

A lot is at stake, both because of the implications of the report as well as the enormous pressure being applied by the EU to tone down the Bulgarian report despite the insistence of the US that Hezbollah finally be recognized as a terrorist organization.

Back in October, Obama's CIA appointee John Brennan made clear how strongly the US wanted Hezbollah to be blacklisted:


“Failure to designate Hezbollah as a terrorist organization makes it harder to defend our countries and protect our citizens,” Brennan declared, saying it complicates law enforcement efforts because of the problems invoking terror charges against Hezbollah suspects.

If indeed the report will "implicate" but not name Hezbollah, it remains to be seen what force the findings will have, and how far it will go to force the EU to finally put Hezbollah on that terrorist list.

In any event, if the report indeed indicates that Hezbollah carried out this terrorist attack -- and the EU does nothing -- what will this reveal about the EU has a whole?


Bulgarian officials have announced that a half-year investigation conducted by Sofia has linked members of the Iran-backed Lebanese group Hezbollah to the July 2012 terrorist attack in the Bulgarian resort city of Burgas. Five Israelis and a Bulgarian were killed in the bombing.


Technorati Tag: Israel and Bulgaria and Hezbollah and Iran.

Email ThisBlogThis!Share to TwitterShare to FacebookShare to Pinterest
Labels: Are Iran and Hezbollah Behind The Terrorist Bombing In Bulgaria