Daniel Pipes Banned in British Library -- But Not Hamas, Islamists and Antisemites

Banned in the British Library


Prominent counter-jihadis like Geert Wilders, Michael Savage, and Robert Spencer have the distinction of being banned from entry into the United Kingdom – and, now, Her Majesty's Government, in its wisdom, has also banned two websites connected to me. It's not quite the same, admittedly, and I am working to get this ban removed, but I also wear it as a perverse badge of honor given that government's shameful record vis-à-vis Islamism.

Say you're in the British Library, the national depository library and a government institution, roughly equivalent to the Library of Congress in the United States or the Bibliothèque nationale in France. Say you want to read what David Brog writes about declining Evangelical support for Israel in the latest Middle East Quarterly. You type in MEForum.org and get the following result: 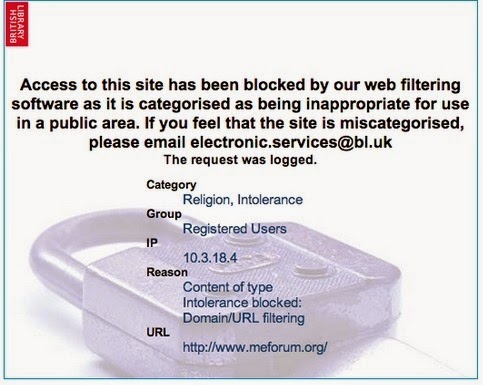 Or perhaps you wish to learn why I distinguish between Islam and Islamism, or why I worry about Islamist aggression in Britain, so you type in DanielPipes.org only to find this: 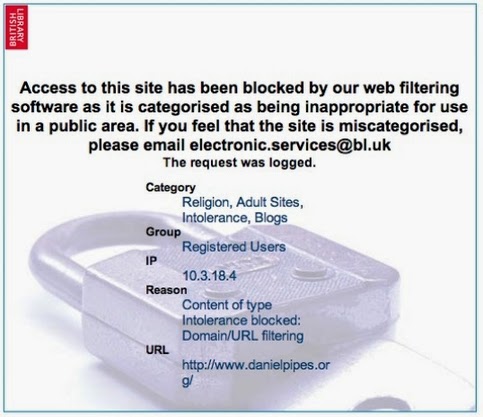 The distinction between the two sites particularly charms me. The British Library categorizes MEForum.org as "Religion, Intolerance" and DanielPipes.org as "Religion, Adult Sites, Intolerance, Blogs." (It's probably titles like "Arabian Sex Tourism" that won me the X-rating.) Oddly, both sites are blocked for the same reason: "Intolerance."

Should you, however, be in the British Library and wish to develop hatred toward Jews, no problem! Here are some antisemitic sites, all accessed in the past few days:
Then, if you need firing up to go murder people on jihad, the British Library makes rich pickings available to you:
And then, perhaps the worst of all:
There could be a technical explanation for this bizarre situation. The British Library issued a press release in December 2013, "Web filtering on the British Library's WiFi service," explaining that


in our public areas where there are regular visits by school children, we filter certain online content, such as pornography and gambling websites. We have recently introduced a new WiFi service. It's early days in the implementation of this service and we are aware that the new filter has been blocking certain sites erroneously. We are actively working to resolve this issue.

Might this be the problem? I have written the library and requested that it unblock the sites. Now, let's see if the censorship was "erroneous" or intentional.
(In contrast, the British Library has not yet excluded me from the UK union catalog of books; so, the same organization that bans my website permits my books. That makes as much sense as the rest of the British government's policies.)

Mr. Pipes (DanielPipes.org) is president of the Middle East Forum. © 2014 by Daniel Pipes. All rights reserved.