Hamas is denying the murders because it was a botched operation.

The goal was to kidnap a soldier or a "settler" to bargain for the release of prisoners. Hamas has made no secret of that desire, and even published handbooks on how to best accomplish a kidnapping.

The appearance of two more teens, the panicking over the phone call, and the murders in the backseat (from where it would have been nearly impossible for them to escape or fight back) were not planned. I'm not sure that the torching of the stolen car was planned either.

Fear of non-existent Israeli pursuit created a kidnapping attempt that ended in the Palestinian murder of 3 Israeli teenagers. Not the kind of feat that Hamas would have liked to brag about in order to increase its street creds in the Islamist world.

As Elder of Ziyon notes, Hamas is already on thin ice with Egypt -- which has accused it of being a terror group and then there is its unity government with Abbas not working out so well. Right now the last thing Hamas needs is to be associated in anyone's mind with ISIS and the outrages by Islamists in in Syria and Iraq

Meanwhile, on the other side of the "Unity Government", the Abbas regime in its own way has also played down the Palestinian terrorist attack as Fatah falsely depicts murdered teens as "soldiers":


"Israelis crying over the three killed soldiers, whose bodies, according to Israeli claims, were found this evening in Hebron, 19 days after they disappeared."

Fatah had been bragging about the kidnapping of the teenagers, but admitting that just teenagers -- not soldiers -- were killed by Palestinian Arabs might reveal the celebration over the deaths for what they are.

It remains to be seen when the would-be kidnappers are caught whether Abbas will be as generous in using US and EU funding to pay their stipend.

This has turned out to be an embarrassment to both Hamas and Fatah -- no relief to Israel that is in mourning over this terrible loss. 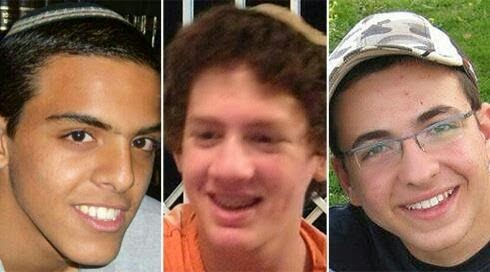 
Technorati Tag: Israel and Gaza and Hamas and Abbas.

Email ThisBlogThis!Share to TwitterShare to FacebookShare to Pinterest
Labels: #eyalgiladnaftali