Our whole nation is weary – strong, determined, clear about who we are, but weary.  How could it be otherwise?  We are contending with both an evil enemy and an insane world.

Shabbat is coming within hours – for which I thank Heaven.  I had thought perhaps a brief post today, one that simply provided background. No way...

What I wrote the other day – about how I would really need to post every two hours to keep my readers informed – continues to be the case.  I will send this out as late as possible before Shabbat and post again after, as necessary.


The US and the UN jointly announced a 72 hour “unconditional” ceasefire, consented to by both sides, that would begin at 8 AM here. During those three days, it was said, there were to be negotiations on extending the quiet more permanently.

What? Another ceasefire?  Another attempt by our prime minister to show that we were on the right side and had humanitarian concerns?  I was deeply unsettled by the involvement of both the US and the UN, but the fact that Egypt would mediate talks was a good sign.

My first thought as the ceasefire began was with regard to work on taking out the tunnels.  Just yesterday, Netanyahu had said work on the tunnels would not stop even if there were to be a ceasefire (and I have to assume he knew it might be coming when he said that).

Via official channels it was hard to come by this information. Aaron Lerner pointedly asked a question about whether “continuing to work on the tunnels,” meant just filling them with sand, or using explosives to properly blow them up.

Unofficially, from a source with connections inside the government, I was told that we would be continuing to blow them up and hoped that information was correct.

Following this, it then seemed important to monitor what would be happening with regard to the teams going to Cairo for the negotiations – and the issues of demilitarization, which Netanyahu had spoken of yesterday.  I saw that Egypt would not entertain the participation of Hamas without a PA presence, and that the Israeli delegation would include Shin Bet chief Yoram Cohen and the head of the Policy and Political-Military Affairs department in the Defense Ministry Maj.-Gen. (Res.) Amos Gilad.

All of this became moot within two hours, however, when Hamas broke the ceasefire: in the Rafah area of southern Gaza (near the Sinai) terrorists emerged from a tunnel and began to shoot at IDF soldiers.  Reports followed of a fierce battle there.  Israel declared the ceasefire formally at a end; from the prime minister’s office came a statement about how the UN and the US can now see how Hamas conducts itself.  Hamas meanwhile attempted to point a finger at Israel – the “occupier” as the one who broke the ceasefire.

Reports of a fierce battle in the Rafah area then followed – a suicide bomber apparently emerged from the tunnel with the others and blew himself up, killing two.

After this, came the chilling news that in the course of the fighting, an IDF soldier has been kidnapped.  He was grabbed during that battle, when the terrorists emerged from the tunnel (in the course of a “ceasefire”).  The IDF has identified him: Second Lieutenant (Platoon Leader) in the Givati Brigade, Hadar Goldin, 23, from Kfar Saba. There are enormous intelligence efforts and an intense search on-going in order to locate Goldin; the period of time from when he was grabbed until it was known that he was gone was short – which increases the possibility that he may yet be found. A search is being done house to house in the area. It is not known if he had been wounded.

Hamas’s Moussa Abu Marzouk announced that Hamas had captured a soldier, but a spokesman for the Hamas military wing has denied a kidnapping.

Netanyahu has informed Kerry that Hamas will bear the consequences for whatever follows.  Kerry termed the kidnapping during a ceasefire “barbaric”  We are currently hitting Gaza very hard.

“We call on the Prime Minister to return Israel her sovereignty. We must stop these cease-fires - they give over a message of hesitancy.

"We must not accept a single condition in a cease-fire. We must either demilitarize or retake Gaza; there is no middle ground. Now is the time."

I’m with Miri. After this kidnapping, I trust and pray that Netanyahu will be as well:

The apparent goal of the kidnapping is so that Hamas can go to Cairo to negotiate a permanent truce from a strong bargaining position.  In their dreams.

There must be – there surely will be - no negotiations as long as they have one of our boys – only action to defeat them with finality. 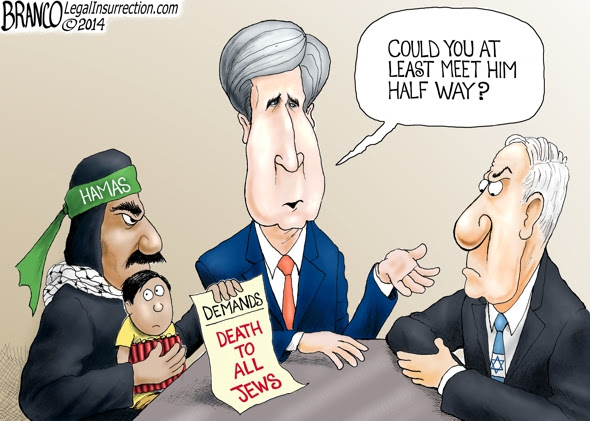 I close here with links to diverse sources (compiled earlier) that will provide you with further insight into how Hamas functions.

Shifa hospital in Gaza was hit recently, and there were furious accusations of Israel having done it.  It turns out that Hamas itself that had done it, as terrorists were careless in the launching of rockets.

This was hardly an exception – it just made press more broadly because a hospital was involved.  In point of fact, Hamas rockets fall short about 25% of time and kill people in Gaza:

We know that Hamas cares not at all for the lives of its civilians, but not many know that child labor is used in digging the tunnels, and it is estimated that at least 160 children have died in the process:

See a tunnel hidden in the bathroom of someone’s house:

And the last information today. With the amount of cement Hamas used to build its tunnels, it could have built two hospitals, 20 clinics, 20 schools, and 100 kindergartens.

Is your mind boggled yet? Getting the picture of the obscene neglect of the people visited upon them by Hamas?