The following by Efraim Karsh is reposted here with permission of Middle East Forum: 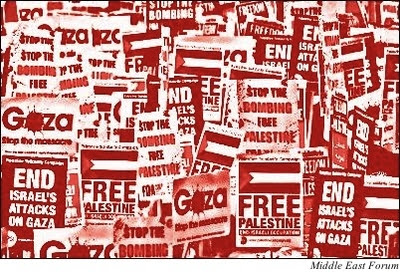 Let's admit it: Israel can never win the media war against Hamas. No matter what it does, no matter how hard it tries.

Not because the Islamist terror group that is raining missiles on its cities and villages and using its own hapless subjects as human shields is the underdog in this conflict, but because the sight of Arabs killing Jews (or other Arabs for that matter) is hardly news; while the sight of Jews killing Arabs is a man-bites-dog anomaly that cannot be tolerated.

Imagine the following scenario: Thousands of foaming-at-the-mouth Jews rampaging through the streets of London and Paris to protest the blitz bombing of their co-religionists by a murderous al-Qaida/ISIS clone. They carry banners urging the killing of all Muslims wherever they are, hurl rocks and petrol bombs at the police, set fire to mosques, destroy Muslim properties and establishments, and attack all Muslims and Arabs coming their way.

Sound incredible? No doubt. For Jews in western (and Muslim) societies are be expected to know their place: to act maturely, responsibly and compassionately, to never fight fire with fire, to always understand the "other," to ever be ready to please, appease, and whenever necessary – turn the other cheek.

Not so Israel's enemies. With a sickening unanimity that has become all too familiar over the past decades, whenever the Jewish state responded in strength to Palestinian terrorism – be it rocket attacks from Lebanon; West Bank-originated suicide bombing campaigns (euphemized as the Aqsa intifada); or rocket, missile and mortar attacks from the Gaza Strip – hordes of hateful, violent demonstrators flocked onto the streets of western cities throughout the world, not to call for peace or an end of violence on all sides but to demonize a sovereign democracy for daring to protect its citizens and to vilify and assault their own Jewish compatriots for no reason other than their different religious and/or ethnic identity.

"Today, non-Israeli Jews feel themselves once again exposed to criticism and vulnerable to attack for things they didn't do," the late New York University professor Tony Judt lamented amid the growing number of hate fests in the early 2000s. "The increased incidence of attacks on Jews in Europe and elsewhere is primarily attributable to misdirected efforts, often by young Muslims, to get back at Israel."

Anti-Semites, of course, have never been short of excuses for assaulting and killing Jews, and infinitely larger numbers of Jews were exterminated shortly before the founding of the State of Israel than in the 66 years of its existence, not to mention the millions massacred in Europe and the Middle East since antiquity.

Neither did European Jew-haters await Israel's establishment to unleash on the remnants of the Holocaust.
Anti-Semitic sentiments remained as pronounced as ever, especially in Eastern Europe, which witnessed a few vicious pogroms shortly after the end of World War II. Even in Germany, Jews found themselves attacked and abused in public with 60 percent of Germans condoning overt anti-Jewish acts of violence.

Yet if this bleak record failed to prevent an astute student of European history like Judt from falling for the canard that Israeli actions are the cause, rather than the pretext, for the worst wave of attacks on Jews and Jewish targets in Europe since the 1930s, why should one be surprised by its thoughtless dissemination by the international media? If it were not so appalling, one could even marvel in the irony that 80 years after being forced to wear yellow stars so they could be targeted for persecution, European Jews are being instructed to hide any signs of their Jewish identity, for their own protection.

What makes this phenomenon particularly galling is that instead of clarifying in no uncertain terms the unacceptability of this bigotry in civilized societies, western elites have treated these recurrent hate fests as legitimate, if at times excessive, manifestations of Muslim solidarity with the Palestinians, thus providing a safe environment for outright anti-Semitic attitudes and behavior. (As evidenced by the ongoing bloodbaths in Syria and Iraq, the notion of Muslim solidarity is a myth, with far more Muslims killed throughout history by their co-religionists than by non-Muslims.) Just as western politicians and the media have ignored Hamas's indiscriminate missile attacks on Israeli civilians but jumped up and down over Israel's military response, so they have been bending over backward since 9/11 to embrace their Muslim citizens and to accommodate their perceived needs and sensitivities while remaining willfully blind to the fact that it is Jews, not Muslims, whose lives have been most adversely affected by increasing hostile attitudes on the ground – after all it is the Jews, not Muslims of Europe, who are emigrating in record numbers to find a safe haven. It is Jews who feel vulnerable to attack, and who have faced the most violence, and whose institutions from synagogues to community buildings to Jewish newspaper offices have been under heavy police guard for years, because of events in the Middle East – no Muslim community in the West has had to undertake similar security precautions.

The truth of the matter is that since anti-Semites have never really distinguished among Zionists, Israelis and Jews (notwithstanding repeated protestations to the contrary), and since Israel is the world's only Jewish state, it has been tacitly construed as epitomizing the worst characteristics traditionally associated with Jews and has attracted the full brunt of anti-Jewish bigotry and hatred hitherto reserved for individuals and communities, not least because it has reversed the millenarian Jewish condition of dispersal, minority status and powerlessness. If prior to Israel's establishment Jews were despised because of their wretchedness and helplessness, they have hitherto been reviled because of their newly discovered physical and political empowerment.

So much so that 64 years after its establishment by an internationally recognized act of self-determination, the Jewish state remains the only state in the world whose right to self-defense, indeed to national existence, is constantly challenged.

In Lord Byron's memorable words: "The wild dove hath her nest, the fox his cove, mankind their country – Israel but the grave."

Professor Efraim Karsh is a senior research associate at the Begin-Sadat Center for Strategic Studies, and a professor of Middle East and Mediterranean Studies at Bar-Ilan University, Kings College London, and principal research fellow at the Middle East Forum (Philadelphia). His books include Palestine Betrayed


Technorati Tag: Israel and Gaza and Hamas and Operation Protective Edge and Antisemitism.