On November 4, 2016, 3 US soldiers - Staff Sgt. Matthew Lewellen, Staff Sgt. Kevin McEnroe and Staff Sgt. James Moriarty died after coming under fire from a Jordanian soldier as they were entering a Jordanian military base.

On November 17, Eric Barbee, spokesman for US Embassy in Jordan, issued a short statement, reflecting the possibility of a terrorist motive on the one hand, and the rumors being spread that the soldiers themselves had accidentally brought the incident upon themselves.


A segment from the CBS morning news revealed more about what happened, and a taste of the various stories that were to come from the Jordanian government.

As early as November 19, two days later, it was already known that there was video footage of what had happened. Even then, the strong possibility was raised that this was a deliberate attack by a Jordanian soldier on US soldiers, Green Berets. The security footage showed a lone Jordanian gunman at a checkpoint shooting at the convoy of Green Berets who were there to conduct training at the King Faisal Air Base in al-Jafr.

It was reported at the time that a US official had, on condition of anonymity, confirmed the video showed the Jordanian soldier waived the first vehicle through the checkpoint and then opened fire on the second vehicle, killing two of the Americans inside. When US troops in the third vehicle returned fire, a third American was killed.

The video itself was not made public at the time

As for the Jordanian soldier, M'aarek Abu Tayeh, he was wounded and placed in a medically induced coma at a Jordanian hospital.

Both an FBI and a military investigation were begun.

By March, a summary of the key findings of the military investigation was revealed in a United States Special Operations Command Press Release. It provided the following outline of what actually happened:


o  On the afternoon of Nov. 4, 2016, a Jordanian Air Force guard shot and killed three Special Forces Soldiers at the entry gate to King Faisal Air Base, Jordan.

o  The three Soldiers were returning to the base in a four-vehicle convoy after conducting weapons familiarization training on a nearby military range.

o  Staff Sgt. McEnroe died at the scene. Staff Sgt. (P) Lewellen and Staff Sgt. Moriarty were medically evacuated after receiving initial treatment at the local medical treatment facility but died en route to King Hussein Hospital in Amman. Autopsy results show that no amount of medical care could have saved the three Soldiers due to the nature of their wounds.

o  All three Soldiers died in honorable service to their country. All three Soldiers were properly trained, equipped, and armed, and were acting in compliance with all procedures and accepted practices. In maintaining their position and engaging the shooter, the Soldiers acted with great valor.

Along with the summary, a redacted version of the results of the military investigation, which had been concluded on February 16, was released as well. It included 2 photos illustrating the scene of the shooting. 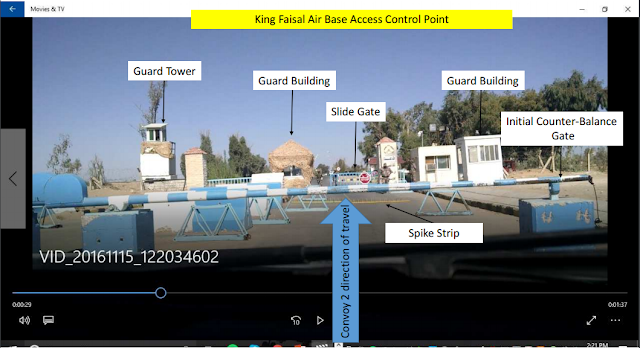 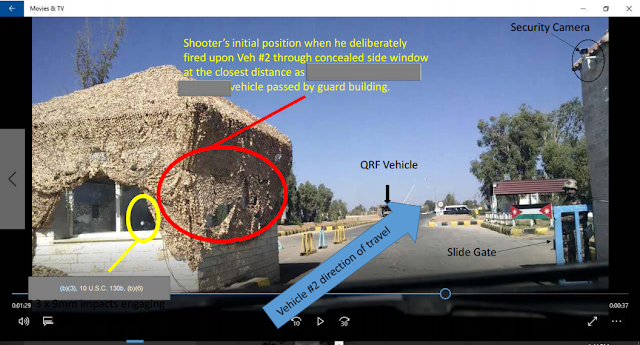 A March 6 letter from Dina Kawar, ambassador of the Kingdom of Jordan, to Representative Ted Poe, a Republican from Texas claimed that a joint US-Jordanian investigation concluded that there was an "absence of premeditated intentions by M'aarek Abu Tayeh," the shooter. Instead, the Jordanians accused the American soldiers not only of failing to stop at the gate but also of having negligently discharged their weapons, causing the security guards to panic and open fire.

The parents turned to the Trump Administration, demanding that action be taken against Jordan and that if the Jordanians refused to take action, that US aid to the country be cut off.

One of the parents, Mr. McEnroe expressed their feelings about Jordan:


"Over four months have passed since our boys were murdered. None of our families has heard any apology, condolences or explanation from the Jordanians other than these false narratives," McEnroe said.

"In my mind, Jordan is at the very least guilty of complicity in the murder of three American brave servicemen," he said.

"We are told that Jordan is an important ally in the war on terror -- a war which I support -- but I encourage our president and our administration to take a hard look at our relationship with an ally who would so callously disrespect the sacrifice made by our boys," McEnroe said.

Congressman Poe, who serves as the chairman House Subcommittee on Terrorism, Nonproliferation, and Trade, spoke about Jordan’s changing story about what had happened:


"I wrote the Jordanian king after I talked to Jim Moriarty about his son," the lawmaker said. "The response seem to say that this entire incident was a mistake and that the Americans were at fault for this whole incident."

Last night, Poe said he received a second letter from the embassy of Jordan.

"They now say 'it was not a mistake but that the shooter was following the rules of engagement," Poe said.

In addition, there were indications that Abu Tayeh did not act alone.


o  A second guard who manned the post with Abu Tayeh had left to use the restroom
o  A third soldier left to open the gate, leaving Abu Tayeh along
o  Other Jordanian soldiers in the area, as many as 11, did not nothing to help the American soldiers
o  Those same Jordanian soldiers fired warning shots at a US truck entering behind the Green Berets’ vehicles, preventing the truck from assisting the US Green Berets.

It was suggested that the reason for the lack of an immediate apology from the Jordanian government was the implications behind such an apology. An apology would be an admission that the elite Hashemite force that guards Jordan’s King Abdullah II had made a mistake -- or worse, that the guard had been turned by ISIS.

The FBI told the families that when Abu Tayeh came out of his coma, they had interviewed him. He admitted that he had used excessive force and was away from his assigned guard position. However, he claimed that he had heard a loud noise and that was what set him off.

The FBI also told the families that the shooter had previously been convicted of sexual on a woman with a knife. He also had anger management issues.

For their part, the military investigation was unable to find any indication for the reason behind the attack. No group ever took responsibility and there was no evidence that Abu Tayeh had actual terrorist sympathies. What they did find was that sloppiness by the Jordanian army was par for the course and it was usual for them to wave US soldiers in without coming out and personally confirm the identities as required and that gate guards “often displayed negligence for basic weapons handling and safety which could be improved.”

What was left was the series of lie after lie offered by the Jordanian government:

The video, though it had no audio, disproved all three claims.

Finally, in mid-April, the Jordanian government admitted that Abu Tayeh had not followed proper military protocol and said they would prosecute him over the death of the US soldiers. However, it was not immediately made clear what exactly the charges would be nor when the trial would take place.

Dana Daoud, a spokeswoman for the Jordanian Embassy indicated that an apology was finally going to be issued by the Jordanian king to the families and added that “the Jordanian government will do everything to ensure that justice is enacted fully.”

Mr. Moriarty was doubtful in his response:


“Any statement that doesn’t include an admission of total guilt and plans for prosecution for the murderer who killed my son and the Jordanians who have failed to do anything about it, will not be enough.”

Finally, last week, on June 1, it was reported that the Jordanian government had formally charged Abu Tayeh with murder:

If convicted by the military court, Abu Tayeh could face the rest of his life in prison -- but a spokeswoman at Jordan's embassy in Washington was unable to confirm whether Abu Tayeh had actually been charged with murder.

There are 3 basic things the parents of the US soldiers are looking for:

And that is why -- based on everything the families of these soldiers have had to put up with till now -- the road ahead may still be a long one.