When Arafat First Started Terrorist Stipends, It Wasn't About Inciting Hatred of Israel

Now that the smoke has cleared, we can see that Secretary of State Tillerson was wrong. His announcement that Abbas agreed to end stipends to imprisoned Palestinian terrorists was greeted with scepticism from the start. While on Tuesday Tillerson claimed the Palestinian Authority "changed their policy" about terrorist salaries, just a day later he had changed his tune and said instead there were "active discussions" and made reference to vague "assurances" given to Trump during his visit in Israel.


Similarly, on June 5 it seemed that Abbas had cut off salaries to Hamas. It could be that Abbas was referring to those cuts when he spoke to Trump, but there too, Hamas ended up getting their salaries.

In any case, the payment terrorist salaries -- and the anti-Israel incitement caused by rewarding attacks on Jews -- continues.

But just how long have Palestinian terrorists been receiving these stipends?


To answer that question, Palestinian Media Watch focuses on the PA Government Resolution of 2010, while acknowledging that the resolution merely "formalized what has long been a PA practice."

In their article The Department of Pay-for-Slay, Douglas J. Feith and Sander Gerber point to the Amended Palestinian Prisoners Law No. 19 (2004), noting:


Legalism is a trait common among authoritarians. Nondemocratic societies lack rule of law, but they generally don’t lack laws. Their laws, in fact, tell us a lot about them.

Their point is that Abbas and the Palestinian Authority go beyond words to incite hatred of Israel. The stipends represent the lengths they go to encourage attacks against Israel, enacting legislation to spur violence, while at the same time maintaining that are willing to negotiate for peace.

Feith and Gerber note that the PA's success can be measured by the fact that in 2014, President Obama said that Abbas “has consistently renounced violence” and has consistently pursued a “peaceful solution” that allows Israelis “to feel secure and at peace.”

But these terrorist payments actually go much further back.

In her book, Humanitarian Rackets and their Moral Hazards: The Case of the Palestinian Refugee Camps in Lebanon, Rayyar Marron writes that these payments began long before Abbas -- and originate with Arafat back in 1964: 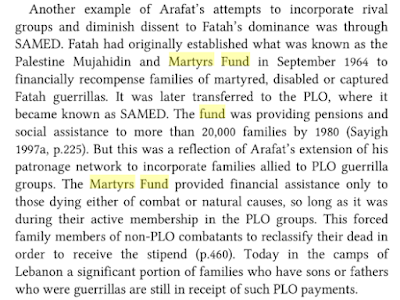 The purpose of the fund at the time was to help establish the centrality of Arafat and the PLO. Marron goes on to detail other methods that Arafat used as well, all of which had the result of


providing them [Palestinian Arabs] with jobs, but it simultaneously destroyed the pre-existing civilian bureaucracy, built on utilising people's competence, rather than on nepotism as increasingly was the case under Fatah's domination.

Abbas apparently learned from the master manipulator. In recent weeks, we have seen Abbas exploiting the funds at his disposal to pressure Hamas by cutting off payments for electricity as well as threatening to cut off salaries.

Maybe that explains why the terrorist stipends have been controversial for years and not for decades.

At first, originating with Arafat, the stipends were a political tool to gain and centralize power.. It was only much later, especially under Abbas, that  funding the imprisoned terrorists has been recognized as a subtle form of encouragement -- along with naming buildings and events after terrorists while allowing incendiary sermons by Imams -- to incite attacks on Israelis.

Abbas has demonstrated that he is a good student that would make his teacher Arafat proud.