Why Did AP Censor Letter from Father Whose Son Was Murdered by Jordanian?

Just last week, the ordeal of the parents of 3 Green Berets who were murdered last year by a Jordanian soldier came to an end. M'aarek Abu Tayeh was convicted of murder by a Jordanian court and sentenced to life in prison.

But the parents are not finished.


One of the fathers, James Moriarty, wrote a letter to Dina Kawar, the Jordanian ambassador to the United States: 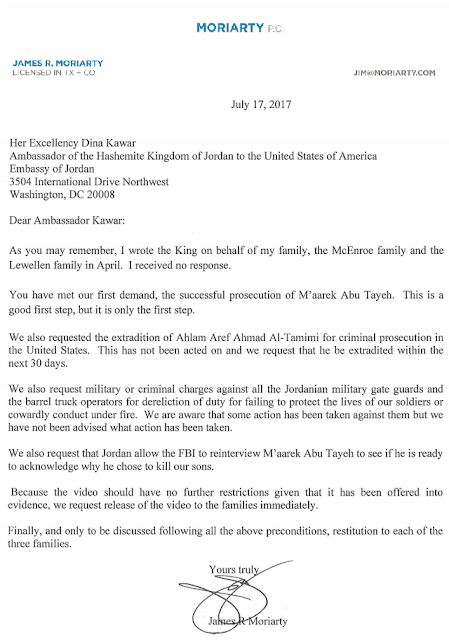 So, while Mr. Moriarty agreed that Jordan had met the demand that Jordan successfully prosecute Abu Tayeh, he still had 5 further requests:


o That Tamimi be extradited to the US within 30 days to face trial for the murder of Malki Roth and Shoshana Yehudit Greenbaum, who was 5 months pregnant at the time

o That charges be filed against the Jordanian soldiers who stood idly by, enabling al-Tawayha to murder the 3 American Green Berets

o That following the fulfillment of all of the preceding preconditions, restitution to the families of the soldiers be discussed

That the murderer of 3 American soldiers was convicted in a Jordanian court and sentenced to life imprisonment is news.

That there were further requests the parents made of Jordan is news as well.

The latter story?
Not so much.

CBS News reports Jordanian soldier gets life sentence for killing 3 U.S. trainers, and makes no mention of either the letter nor of the requests being made of Jordan. The same goes for The Atlantic. Also CNN.

But there are also reports that do mention the letter and mention the requests -- but do not mention all of them.

ABC News in Texas, ABC13, runs the story with the headline Green Beret's father speaks about conviction of son's killer, but does not report on everything he said.

According to that article:


He [James Moriarty] is now pushing for the Jordanian soldiers who stood by and watched the shooting to be charged. He also wants the security video showing the killings to be made public.

The article leaves out any mention that these requests were part of a letter, and that Moriarty also requested an FBI interview with Abu Tayeh, restitution from the Jordanian government -- and a response from Jordan within 30 days regarding extraditing Tamimi to the US.

In addition to Eyewitness news, AP completely omitted that part of the Moriary letter as well:


Moriarty’s father, Jim, wrote in a letter Monday to the Jordanian Embassy in the U.S. that the “successful prosecution” was a “good first step, but it is only the first step.”

In the letter, a copy of which was given to the AP, Moriarty listed several demands to Jordan. These included allowing the defendant to be re-interviewed by the FBI about his motive and releasing the security video to the families. Moriarty, a lawyer, said the video had been entered into evidence at the trial.

That is the version that The Chicago Tribune uses.
And The New York Times.
And The Washington Post

And obviously many more. After all, newspapers all over use the news feed from the Associated Press and pay for the privilege.

For a newspaper to report on the conviction but leave out the letter may be understandable. One can explain that the conviction is the main story and is the point that readers are primarily interested in.

However, for a news organization like AP to report on the conviction, go the extra step to report the families feel there is still more to be done, but then edit what those other requests are and provide that abridged version of the letter to other news outlets -- that is irresponsible.

There were some that reported the full story.

Military.com got the story right:


Moriarty's letter requests the extradition of Ahlam Aref Ahmad Al-Tamimi to the United States for criminal prosecution and that "military or criminal charges against all the Jordanian military gate guards and the barrel truck operators for dereliction of duty for failing to protect the lives of our soldiers or cowardly conduct under fire."

The Jewish Press wrote about Moriarty's reference to Tamimi as well:


The families, Moriarty pointed out, “requested the extradition of Ahlam Aref Ahmad Al-Tamimi for criminal prosecution in the United States. This has not been acted on and we request that he be extradited within the next 30 days.”

Even The New York Times, which came out with an article based on the AP and did not mention Tamimi, came out with a second article, Jordanian Sentenced to Life in Prison for Killing 3 U.S. Soldiers, on the very same day and reported on all of the requests made:


In an open letter on Monday to Jordan’s ambassador to the United States, Sergeant Moriarty’s father, James R. Moriarty, who is a lawyer in Houston, called the conviction “a good first step” but said that the victims’ families had made other demands, which had not been met.

The families asked that the video be released publicly; that the F.B.I. be given a fresh chance to interview Sergeant Tawayha about his motives; that other guards who were at the gate that day be held responsible; and that Jordan extradite Ahlam Aref Ahmad Al-Tamimi, who has been charged in the United States with involvement in a 2001 attack on a pizza restaurant in Jerusalem that killed 15 people, including two Americans. [emphasis added]

It should not be too much to expect the media to report accurately and completely on the story of families seeking justice for the sons murdered in a foreign country, especially when they have yet to have achieved all of their goals in seeking that justice.

As for the request in the letter for the extradition of Ahlam Tamimi, who is on the FBI Most Wanted List, to the US, the families of the US soldiers - Lewellen, McEnroe and Moriarty - joining with the families of the Americans killed by a Jordanian terrorist, should be a news story that the media should want to report on, rather than allow it to fall between the cracks.