Do You Really Want To Argue That Israel Stole The Hora From The Palestinians?

In an interview, Israeli-American choreographer Hadar Ahuvia talked about her latest work - Everything you have is yours? To Ahuvia, that is no idle question. She is the granddaughter of Eastern European Jews who came to Israel -- and then years later, her parents moved with her to Florida and then Hawaii. Ahuvia has developed an interest in what she sees as the Israeli mimicking of Palestinian Arab culture.


Ahuvia touched on this in her interview:


One issue you explore is cultural appropriation, how the pioneers of Israeli folk dance, mostly Eastern European women, drew from social dance forms like Palestinian dabke.

It’s well-documented that these women went to Palestinian villages and watched them dancing and felt they held the steps for what new Israeli dances could be. And so they borrowed steps and wrote new music and created dances that were directly synchronous to the new music, and in this way it becomes a new Israeli dance.

This was their way of participating in the nation-building and what for them was this revolutionary moment. I don’t think that cultural exchange is bad, but I think it’s about the context of whose narratives get told and seen.

In a guest post she wrote for a blog, four days after the interview, Ahuvia goes further:


Increasingly our home [in Florida and Hawaii] began to mimic the Arab essence that is claimed as fundamentally Israeli. Hummus, tahini, olive oil zaatar, pita, baklava. And beside the Palestinian shepherd salad, the syncopated dabke and Yemenite steps, Turkish and Druz inspired melodies of early Hebrew songs and their synchronous dances. These kept us marinating in a Mediterranean Israeli identity, our distinction from the American Ashkenazi diaspora encroaching on us-- ameripoop-- treacherously symbolized by applesauce on latkes.

Stoll addresses the one-sided view presented by the interview and supplies context with the opposing view ignored by the New York Times:


o  Former New York Times correspondent David K. Shipler, in his 1986 book Arab and Jew, also wrote about the accusation of cultural theft. He quotes a Ibrahim Kareen of East Jerusalem who claims, “The Israelis have stolen a lot of Palestinian culture...For instance, many dances. The Hora. This is Palestinian. Many dishes.” But Shipler goes a step further and writes, "The roots of folk dance are old and tangled, and while the Hora does bear resemblance to Arab dances, the origins are too deeply buried for any side to make clear proprietary claims.”

o  According to the Jewish Women’s Archive article on the history of Israeli Folk Dance, "During the Second and Third Aliyah periods, between 1904 and 1923, the halutzim danced only dances that they had brought with them from the Diaspora — the Horah, Polka, Krakowiak, Czerkassiya and Rondo, with the Horah becoming the national dance."

o  According to the Israeli Ministry of Foreign Affairs Israeli folk dance is “an amalgam of Jewish and non-Jewish folk dance forms from many parts of the world,” describing the Hora as Romanian, and then continues that “Widespread enthusiasm for dance followed, bringing with it the creation of a multifaceted folk dance genre set to popular Israeli songs, incorporating motifs such as the Arab debka, as well as dance elements ranging from North American jazz and Latin American rhythms to the cadences typical of Mediterranean countries.”

We can even go a little further.

The Encyclopedia of World Folk Dance has a list of dances and their countries of origin. It includes the dabke. Not surprisingly, the dance is not a Palestinian dance -- it is an Arab dance. 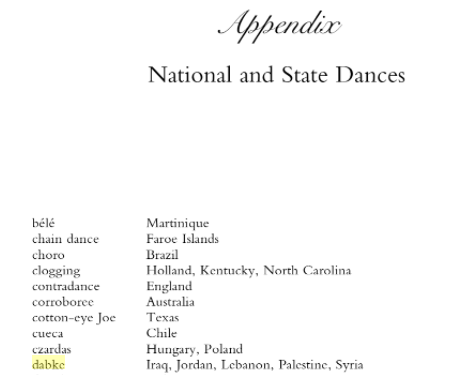 And that fact does not negate the Jewish cultural history of the Jewish dance, The Hora: 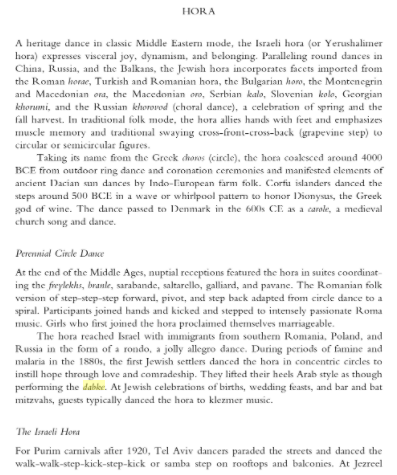 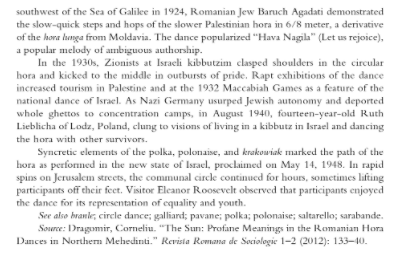 According to this, if the Palestinian Arabs are going to accuse Jews of stealing their dance, they will just have to stand in line -- behind Rome, Turkey, Romania, Bulgaria, Montenegro, Macedonia, Serbia, Slovenia, Georgia and Russia.

Interestingly, according to this encyclopedia, the similarities of the Hora to the dabke are attributed to external flourishes to a dance that was already adopted.

All this raises the question of whether the Palestinian Arabs have ever copied anything from the Jews.

In Mirror Image: How the PLO Mimics Zionism, Pipes writes that "Palestinian nationalists have time and again modeled their institutions, ideas, and practices on the Zionist movement. This ironic tribute means that the peculiar nature of the PLO can be understood only with reference to its Zionist inspiration."

The similarities go beyond copying the purpose of the organization, such as the National Association of Arab-Americans emulating the American Israel Public Affairs Committee (AIPAC).


Pipes writes that the emulation goes beyond organizations and agencies:


o  Palestinian Arabs sometimes refer to themselves as the "Jews of the Middle East"
o  They claim that like Jews, they suffer prejudice, dispossession and expulsion despite being more educated than the majority population
o  Just as Jews were thrown out of multiple countries, they were forced out of Jordon, Lebanon and Kuwait in only 20 years
o  Palestinian Arabs claim their treatment by Israel is analogous to the treatment of Jews during the Holocaust
o  The Palestinian claim to a "Right of Return" mimics the Israeli "Law of Return"

And then, of course, there is Jerusalem:


Jerusalem is the only capital of a Jewish state, as well as a unique city in Jewish history, religion, and emotions. In contrast, the city is so minor in Islam, it is not even once mentioned in the Qur'an. Nor did it ever serve as a political capital or cultural center...

But based on what Israel has been able to accomplish, it is not surprising how far the Palestinian Arabs have gone in order to copy the very Zionists they condemn. The Jews wanted a state, the re-establishment of the Jewish state, so they were not content just to live off of the land.


The Jewish accomplishment during the Mandatory period was indeed impressive: by developing the Jewish Agency into a proto-state institution, Zionists created the bases for the full-fledged government that emerged in 1948. They already had a political authority, a military wing, an educational system, a mechanism to distribute welfare, and so forth. In contrast, Palestinians failed to match these institutions, and so found themselves disorganized when the British withdrew from Palestine in 1948...In effect, the Palestinians are trying half a century later to make up for their mistakes of the Mandatory period.

But we can go a step further. More than what Zionism inspired in Palestinian Arabs in the 20th century, what have Jews contributed to Arabs in general, and to Islamic culture overall, over the generations?

Could be quite a bit.

In Battleground: Fact and Fantasy in Palestine, Shmuel Katz quotes Philip K. Hitti, a Lebanese American professor and authority on Arab and Middle Eastern history. Hitti writes in his History of the Arabs


But when we speak of 'Arab medicine' or 'Arab philosophy' or 'Arab mathematics', we do not mean the medical science, philosophy or mathematics that are necessarily the product of the Arabian mind or developed by people living in the Arabian peninsula, but that body of knowledge enshrined in books written in the Arabic language by men who flourished chiefly during the caliphate and were themselves Persians, Egyptians or Arabians, Christian, Jewish or Moslem.

Indeed, even what we call 'Arabic literature' was no more Arabian than the Latin literature of the Middle Age was Italian...Even such disciplines as philosophy linguistics, lexicography and grammar, which were primarily Arabian in origin and spirit and in which the Arabs made their chief original contribution, recruited some of their most distinguished scholars from the non-Arab stock (Battleground, p. 111)

Bernard Lewis writes similarly in his book, The Arabs in History:


The use of the adjective Arab to describe the various facets of this civilisation has often been challenged on the grounds that the contribution to "Arab medicine", "Arab philosophy", etc, of those who were of Arab descent was relatively small. Even the use of the word Muslim is criticised, since so many of the architects of this culture were Christians and Jews.

During the period of greatness of the Arab and Islamic Empires in the Near and Middle East a flourishing civilisation grew up that is usually known as Arabic. It was not brought ready-made by the Arab invaders from the desert, but was created after the conquests by the collaboration of many peoples, Arabs, Persians, Egyptians and others. Nor was it even purely Muslim, for many Christians, Jews and Zoroastrians were among its creators. (p.14, 131)

With all that shared history and shared culture over 1,400 years, maybe the Arabs can share a dance or a falafel for old times sake.