According to Mahmoud Abbas, Jerusalem is the “eternal capital of the State of Palestine.” Then again, Abbas is the Palestinian Arab dictator whose term in office ended in 2009. Not only do Abbas and the Palestinian Arabs know that Jerusalem is the capital of "Palestine" -- they also think they have a pretty good idea of just what "Palestine" looks like.

Here is the logo of the Fateh Youth Movement. The boundaries of what they call "Palestine" are basically the borders of Israel, except that they also include Gaza and the West Bank.

Not surprisingly, that map bears little resemblance to reality -- not because they are trying to co-opt the State of Israel, but because there was no country called Palestine that corresponds to that map.


For example, in his article "Palestine: On The History and Geography of a Name," Bernard Lewis writes about the borders of the area that bears that name. And those borders were forever changing:


During the later Roman and Byzantine periods a number of changes were made, in the course of which Roman Palestine was extended by the annexation to it of neighbouring territories and then subdivided. Under Diocletian, the province of Arabia, founded by the Emperor Trajan in the year 105, was attached to Palestine, but in 358 this area, consisting of the Negev and southern Transjordan, was constituted a separate province and named Palestina Salutaris. In about 400 ad, Palestine proper was split into two provinces known respectively as Palestina Prima and Palestina Secunda, while Palestina Salutaris was renamed Palestina Tertia


In this setup you had:

Three Palestines - but no capital in Jerusalem.

After the Muslim invasion and conquest of the area, there were some changes made.


After the Arab conquest in the seventh century, the new masters of the country seem substantially to have retained the existing administrative subdivisions; Palestina Prima and Palestina Secunda remained but with new names and new capitals. The first became Filastin, an obvious Arabic adaptation of the Roman name, and was administered first from Lydda and later from Ramla. Palestina Secunda was called Urdunn, that is, Jordan, after the river, and had its capital at Tiberias. Jerusalem, which in the earliest Arabic texts is referred to by its Roman name of Aelia, was not a provincial or even a district seat of government [emphasis added].

Bottom line, during this period of Muslim rule, there was still no capital in Jerusalem, and no independent country called Palestine either:


In early medieval Arabic usage, Filastin and Urdunn were subdistricts forming part of the greater geographical entity known as Syria or, to use the Arabic term, the land of Sham. [emphasis added] 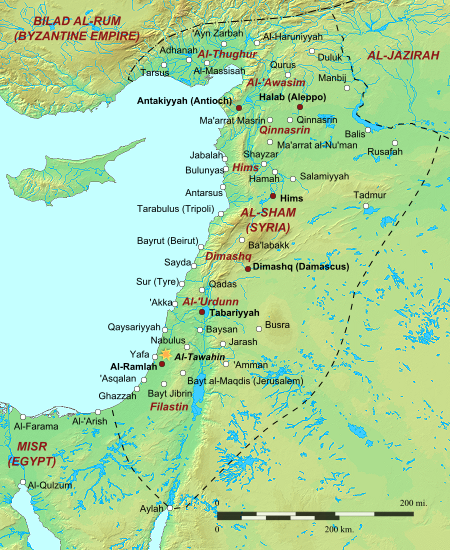 This subservient status of Palestine existed not only under the Romans but also under the Byzantine Empire and Muslim rule as well - until the Crusaders conquered the land. Then that changed:


During the period of the Crusades, the name Palestine or Filastin fell into disuse. The Muslims no longer administered it, and the Crusaders preferred to call the country which they had conquered the Holy Land and the state which they had established the Kingdom of Jerusalem.

Finally, Jerusalem got some recognition -- but it was not by the Muslims.

Later, after the Muslims recaptured the land back from the Crusaders, there were still more re-divisions of the land.


After the Muslim reconquest, the names Filastin and Urdunn disappear from administrative usage. Under the successors of Saladin and still more under the Mamluks who ruled from the mid-thirteenth to the early sixteenth centuries, the country was redistributed in new territorial units, usually known by the names of towns which were district administrative centres. [emphasis added]

That last point is important: From this point going forward, there was no Filastin or Palestine.


The name Filastin or Palestine...had never been used by Jews, for whom the normal name of the country, from the time of the Exodus to the present day, was Eretz Israel. It was no longer used by Muslims, for whom it had never meant more than an administrative sub-district and it had been forgotten even in that limited sense.

So who did use the word 'Palestine'?

The word became widely adopted in the Christian world. During The Renaissance, there was a revival of interest in classical antiquity and as a result, the Roman name Palestine became the common word used to describe the country in most European languages. And under the British, the word was again used to refer to that area bordering on both sides of the Jordan River - for the first time since the early Middle Ages.

Under Arab rule, the area kept being divided and re-divided. Just to give you an idea of the state of flux in the area:


o  At one point the areas on the two banks of the Jordan were divided into six districts with their capitals in Gaza, Lydda, Qaqun, Jerusalem, Hebron, and Nablus, all six districts forming part of the province of Sham, with its capital in Damascus. (Jerusalem was finally a capital - a district capital - with the actual capital in Damascus.)
o  At certain times Gaza and Lydda became separate provinces.
o  During the late Mamluk period, most of Palestine seems to have been divided into the Niyabas (lieutenancies) of Gaza and Safed. The Niyaba of Safed included much of what today is south Lebanon, with the districts of Tyre and Tibnin. All these were still under the rule of Damascus.
o  After the Ottoman conquest in 1516-17, the country was divided into the Ottoman administrative districts (Sanjak) of Gaza, Jerusalem, Nablus, and Safed west of the Jordan and Ajlun in Transjordan. An additional district, Lajjun on the west bank, was later added. All these again were subject to the authority of Damascus.
o  These districts were from time to time subdivided and rearranged during the four centuries of Ottoman rule.
o  In the last phase, before the British took over, the center and north of the country were part of the vilayet of Beirut, while the Transjordan was made part of the vilayet of Damascus and the rest of "Palestine" became the indepedent district of Jerusalem -- independent in this case meaning it was directly dependent on the capital in Damascas, but not subject to any of the Pashas of the surrounding provinces.

There was never a sovereign country called "Palestine" matching the maps that Abbas and Fatah like to parade around. In the end, there was a district called Jerusalem, taking up a portion of what the Palestinian Arabs claim as their state.

As far as capitals go, there were so many -- usually subject to the authority in Damascus -- that if anything, instead of being the eternal capital of "Palestine," Jerusalem was the ephemeral capital of a very truncated district in an area in part of Palestine.