When 11 Jews Are Murdered In Their Synagogue - Jews Blame Other Jews?

If you’re blaming one person, one party, one movement for anti-Semitism, you really don’t understand the problem.
Jonathan Schanzer, Twitter

This past Shabbos a vicious Antisemite entered the Tree of Life Synagogue - where he shot and killed 11 Jews.


At issue is the spread of rabid Antisemitism, not only globally... 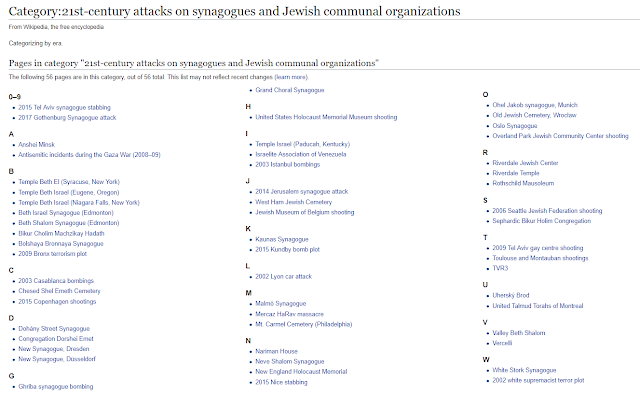 but now in the US


The attack on a Pittsburgh synagogue Saturday morning is the worst on worshiping Jewish people in American history, according to a Cincinnati professor and director of the American Jewish Archives.


"This is the first time in all American history that Jewish people apparently have been murdered while worshiping," said Gary Zola, who also teaches the American Jewish experience at the Hebrew Union College-Jewish Institute of Religion in Cincinnati [emphasis added].

according to Joel Rubinfeld, president of the Belgian League Against Anti-Semitism, the deadliness of Antisemitism has now reached the level of Europe,  and he talks about the "Europeanization of American Jewry":

“In Europe, the prospect of deadly expressions of anti-Semitism is a part of life that we grow up with,” said Rubinfeld, who was present at the Grand Synagogue of Brussels when a terrorist shot four people there on Rosh Hashanah of 1982, wounding two of them seriously and the other two lightly. “I used to think this was a fundamental difference to the United States, but no more.”

The Pittsburgh shooting “will be a turning point for American Jews, who will need to reevaluate the vulnerability of their institutions” Rubinfeld said. “I think we’ll see a Europeanization of American Jewry in this respect.”

Currently, Jewish institutions are guarded by soldiers toting machine guns in Belgium and France, among other European countries, making an attack like the one in Pittsburgh “quite difficult,” Rubinfeld said. [emphasis added] 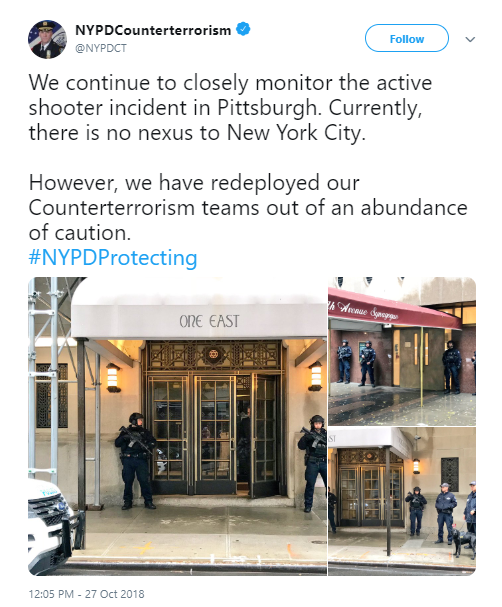 This is a sight we are used to seeing elsewhere.


Condemnations of the attack were not slow in coming.
Jews, of course, were among those condemning the attacks.

But just who were they condemning?

Here is just a sampling of whom some Jews held responsible for the murder of 11 Jews:

From The Forward, on the very same day:
But Trump wasn't the only target.
In that last article by Faulding, the Jews who voted for Trump also bear some responsibility.

And Batya Ungar-Sargon, the opinion editor at The Forward, goes after Israel.

Now here are some Tweets by Jews who blamed other Jews -- and some even suggested going after them:

Here is a tweet by Julia Ioffe, a correspondent for GQ: 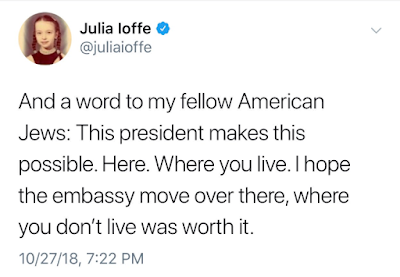 Here is a tweet by a Rabbi Mivasair, who describes himself as "Active in peace, justice; 4 yrs in Israel-Palestine" -- in response to Naftali Bennett announcing he is traveling to Pittsburgh to show solidarity. He explicitly holdes Naftali Bennett responsible: 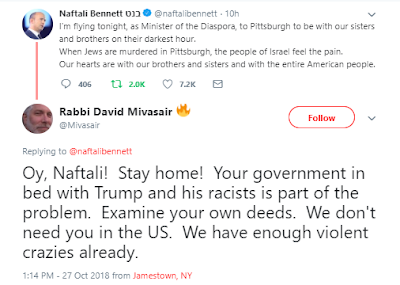 Here is a Tweet by Aaron David Miller, a former Middle East analyst and negotiator in both Republican and Democratic Administrations, who is normally more level-headed. 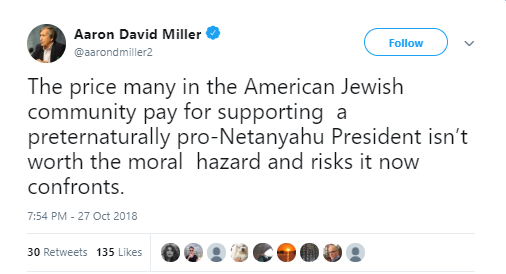 This is from Franklin Foer, a staff writer at The Atlantic, who offers a prayer for the murdered Jews -- and then suggests going after other Jews. 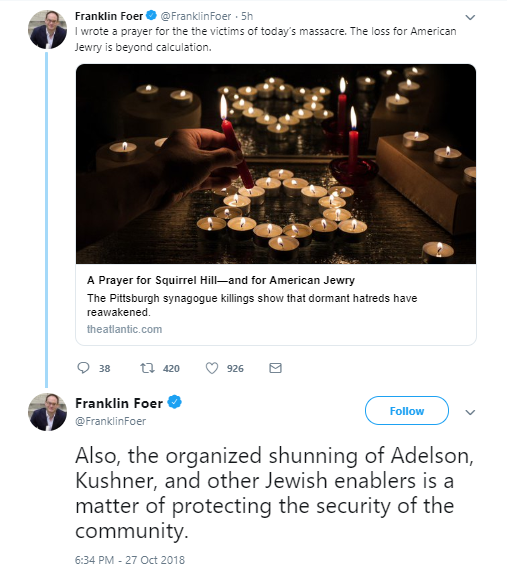 Rabbi Jill Jacobs, Executive Director of Truah, took the opportunity to tweet she agrees with Foer about shunning Jews who support Trump and even thanked him for the idea -- but then thought better of the idea and deleted the Tweet, with neither comment or apology. 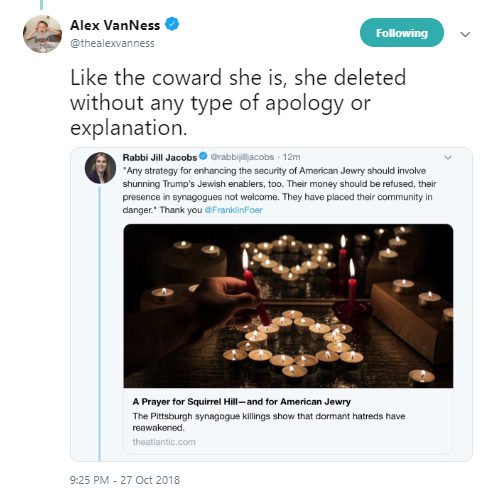 Here is a Tweet from Rebecca Vilkomerson, Executive Director of Jewish Voice for Peace which is responsible for so much of the anti-Jewish hatred that permeates college campuses.

Regardless of her motives, even she knew better than to attack outright: 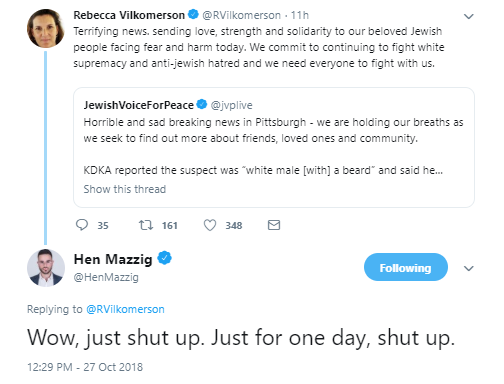 The anti-Trump rhetoric has already reached fever pitch, so naturally, it feeds on tragedies like this.

But when a tragedy that should lead Jews to unite instead leads Jews to turn against other Jews, that is worse than a tragedy; it is a disaster.