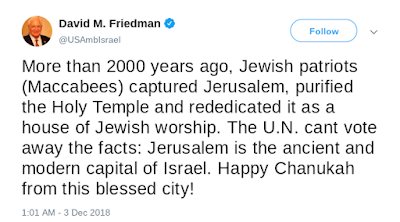 It was just an accurate description of the holiday of Hanukkah and of its implications.

But that was just too provocative for some.
Here is how Irish Foreign Minister Simon Coveney responded -- originally 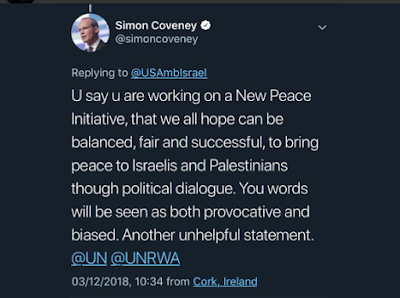 Coveney questions the Peace Initiative itself ("U say u are working on a New Peace Initiative") and finishes off claiming that this is just one more in a series of "unhelpful statements."

But then Coveney thought better of what he wrote.
Here is the revised version Coveney tweeted after he toned it down a little: 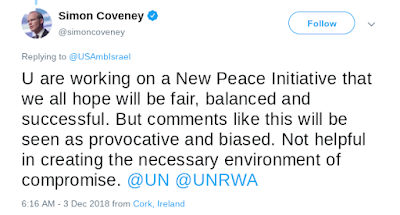 But still: Jews describing Jewish holidays is provocative when they are tied to the history of the Jewish people and how they have fought for their lives -- and their land.

Are Tweets like this provocative in and of themselves, or because they go against the ongoing flow of UN bias against Israel? Just yesterday, the UN passed 6 anti-Israel resolutions, including one UN resolution that refers to the Temple Mount only by the Arab name of Haram al-Sharif

Can't have Jews going around pointing out that Hanukkah is predicated on the Jewish identity of the Temple Mount now, can we?

The world may be willing to wish the Jews a Happy Hanukkah, but they are only willing to go so far: 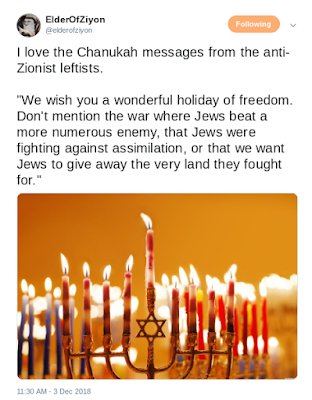 During Hanukkah, the Jewish connection to the Temple Mount and Jerusalem is more blatant, but even holidays like Passover, Shavuot, Rosh HaShannah, Yom Kippur, Sukkot and Shemini Atzeret remind us of Jewish Jerusalem -- if for no other reason than the prayers that recall the sacrifices that were brought to the Temple in Jerusalem.

The same goes for Tisha B'Av and other fast days that commemorate the destruction of the Temple.

Likewise, even in during the holiday of Purim, which did not even take place in Israel, the status of which day the Megillah is read is dictated on whether the city was a walled city when Joshua conquered the land -- and the only city that fulfills that requirement today is Jerusalem.

So while the world has no problem remaining quiet while Palestinian Arab leaders deny the historical bond between Jews and Jerusalem, when Jews openly celebrate their holidays and their ties to Jerusalem and the Temple Mount, we are the ones being provocative.