Israel Did Nothing To Create Hezbollah -- But Arafat Did

With its recent clash with Israel, Hezbollah is again in the news. But for all of the attention Hezbollah gets, there are still elements of its history that remain ignored -- or just misrepresented.

Tony Badran, a research fellow at the Foundation for the Defense of Democracies has written extensively about Hezbollah as well as Iran, Lebanon, Syria and Israel. Recently, Iran announced sanctions against the think tank itself.

In his article, The Secret History of Hezbollah, Badran writes that while the Hezbollah mythology claims that the group was founded in 1982, in Lebanon’s Bekaa Valley, as a resistance group to the Israeli invasion that year -- the truth is:


Hezbollah and the Islamic Republic of Iran have been joined at the hip from the very beginning, even before the 1979 Iranian revolution.


Because Hezbollah's origins are directly tied to the origins of Iran's Islamic Revolution, the terrorist group's own beginnings go back to the rivalry between Iranian revolutionary factions that opposed the shah of Iran. The conflicts between these factions played themselves out not only in Iran, but among their followers in Lebanon as well.

In Arafat and the Ayatollahs, Badran traces the relationship between the Iranian revolutionary factions and the PLO back to the late 1960s, when Arafat rose to power. After the shah's crackdown in 1963, Iranian opposition groups adopted guerrilla tactics against the shah and by the end of that decade made contact with the PLO in Qatar, as well as Iraq -- where Khomeini had been living since 1965. Iranian guerrilla organizations looked for training and made their way to PLO camps in Jordan and South Yemen.

But during the early to mid 1970s, Lebanon was especially valuable as a training ground for these groups because of its weak government and lack of control:


Even before Lebanon’s own system collapsed, and the country plunged into civil war, fueled in part by Palestinian weapons and ambitions, the country had become a training ground for revolutionaries from all over the world, and a magnet for cadres of the main Iranian revolutionary factions, from Marxists to theocrats and everything in between.

Iranian revolutionary activists gravitated to Lebanon -- not because of any interest in the fact that Lebanon bordered Israel, but because of the weakness of the Lebanese government. At the time, Lebanon was home to the PLO too, which had been kicked out of Jordan in 1970 following 'Black September'. The PLO was free to run their military training camps. Those camps made it possible for the anti-shah groups to get military training and weapons, contact other revolutionary groups, form alliances, and establish networks to support their fight against the Iranian regime.

Another plus for these Iranian factions, was Lebanon’s large Shiite population, which included the influential Iranian cleric Musa al-Sadr, who helped many of the Iranian opposition groups. Down the road, the networks of both Sadr and the PLO would continue to be helpful after the Iranian revolution, during the power struggle between Iran’s revolutionary factions that followed. Also among the Iranian groups operating in Lebanon at the time was the Liberation Movement of Iran (LMI). One of its leading figures was Mostafa Chamran, who together with the LMI worked closely with Sadr.

Sadr relied on the PLO for training his Amal militia -- but again, not for the purpose of fighting Israel. Instead, with the onset of the Lebanese civil war, Sadr wanted to protect his and the Shiite community’s interests from the other Lebanese factions.

In fact, both Sadr and Chamran were ambivalent about the Palestinians and the divide between Sadr and the PLO widened further:
Meanwhile, the other main faction of Iranian revolutionaries operating in Lebanon consisted of the followers of Ayatollah Ruhollah Khomeini. That group maintained close relations with the PLO, while mistrusting Sadr and the LMI. This is the faction would go on to become part of the Islamic Republic party after the Iranian revolution. Many of them also became top commanders in the Islamic Revolutionary Guard Corps (IRGC).

According to PLO operative Anis Naccache, who coordinated with the Iranian revolutionaries, Khomeini's group fear of a coup following their victory, led to the creation of the IRGC, for which he took personal credit, claiming he was approached specifically to draft the plan to form what became the main pillar of the Khomeinist regime.


The formation of the IRGC may well be the greatest single contribution that the PLO made to the Iranian revolution.

One of those associated with this Khomeinist faction was Hojjatoleslam Ali Akbar Mohtashami, a student of Khomeini who would play a critical role in the emergence of Hezbollah. Another important figure, Mohammad Saleh Hosseini, played a key role in forming Hezbollah and was a founding member of the IRGC. Hosseini and the Khomeini's followers recruited young Shiites who were pro-Khomeini who became the nucleus of Hezbollah. The most famous of these was Imad Mughniyeh, who went on to become the group’s military commander and the mastermind of many of Hezbollah’s most notorious operations, such as the Marine barracks bombing in 1983.

The tensions between the Sadr and Khomeini camps in Lebanon played out back in Iran after the revolution. And then in August 1978, Sadr disappeared during a trip to Libya.

After Sadr’s disappearance, events accelerated. The shah was forced to leave Iran in January 1979, leaving the way open for Khomeini to return to Iran a few weeks later in triumph. Soon after, the Islamic Republic party was formed, bringing together Khomeini’s followers and the founding of the Islamic Republic. They began calling themselves Hezbollah, to distinguish themselves from their rivals, the LMI and allied factions.

By the summer of 1981, the Islamic Republic party finished taking sole control of the government, and called themselves “the Hezbollahi government.”

Mohammad Saleh Hosseini was assassinated in Beirut in April 1981, but by then the assets that he and the top IRGC leadership had been cultivating in Lebanon since the mid-70s were consolidated. Mughniyeh was summoned to Iran to discuss providing training for Hezbollah and in 1982, an Iranian delegation arrived in Lebanon's Bekaa Valley.


In the conventional narrative of Hezbollah’s origins, it is the arrival of this contingent, the work it did there, and the men it trained that is typically said to signal the organization’s birth. However, by the time Dehghan, Mohtashami, and Mughniyeh engineered the October 1983 attack that killed 241 American servicemen, the Khomeinists had already been active in Lebanon for over a decade. [emphasis added]

In effect, just as Khomeini and his followers took over control of the revolution in Iran, they did the same thing where it had all began, in Lebanon:


And now it was all coming full circle as Iran’s triumphant Islamic Republicans, Hezbollah, spawned their namesake in Lebanon.

Arafat must have been thrilled.

His support for Khomeini and for Hizbollah seemed to bode well for the terrorist's influence with Iran. In fact, when he arrived in Tehran on February 17, 1979, he was the first “foreign leader” to be invited to visit Iran -- just days after the victory of the revolution.


Arafat tried to exploit his new-found friendship, but just like he did in Jordan, Arafat soon made himself unwelcome.
In the end, Arafat's plans backfired:


By forging ties with the Khomeinists, Arafat unwittingly helped to achieve the very opposite of his dream. Iran has turned the Palestinian factions into its proxies, and the PLO has been relegated to the regional sidelines.

And Hamas, at least, seems to have made its peace with that. 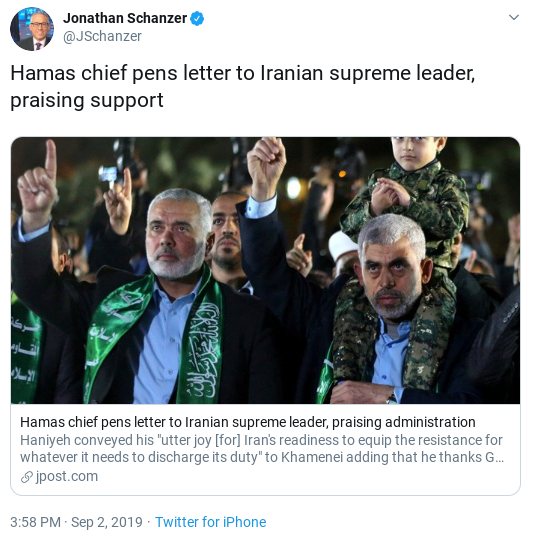