It Is Absurd To Blame The West For Muslim "Honor" Crimes

On Thursday, August 29, Israa Ghrayeb was murdered by her family.

They were angered by a video she posted on social media of herself with the man she was soon to be engaged to. Her brother claimed she dishonored the family by showing the two of them together before they were married. The father called on the brother to beat Israa, and while trying to escape, Israa Ghrayeb fell from the second floor of their home, suffering serious spinal injuries. Then, while she was at the hospital, Ghrayeb was apparently attacked a second time and died.

The family claimed she died of a heart attack.

Another honor killing.
But this one was different. 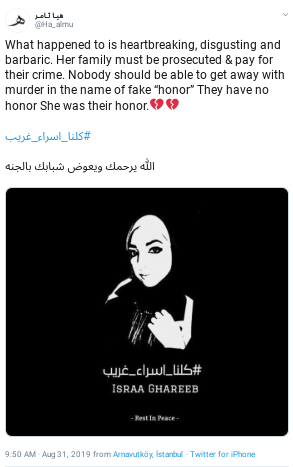 
The death of a young Palestinian woman in the West Bank has sparked widespread outrage across the Middle East amid accusations that it is nothing but another case of so-called honor killing.

The suspicious circumstances of 21-year-old Israa Ghareeb’s death in Bethlehem have also drawn attention to a practice increasingly seen as a stain on the conscience of Middle East societies.

...Soon afterwards, #WeAreAllIsraa began to trend on Arabic Twitter, with more than 50,000 tweets displaying the hashtag.


This anger is not only against the Palestinian government -- it is also against Jordan.

There has never been a sovereign Palestinian state in what is now referred to as the "West Bank". Before Israel recaptured it in the Six Day War of 1967, the area was under Jordanian rule after it claimed it as its own during the 1948 War, the validity of which was recognized only by Great Britain and Pakistan.

The law that allows Palestinian men to kill female members of their family with relative impunity originates from Jordan.

According to Article 99, this allows for reducing the sentence (via Google Translate):

If the case is found to be mitigating, the court may order:

1. Instead of execution for life or fifteen to twenty-five years.

2. A- Instead of life imprisonment, the same penalty shall be imposed from fifteen to twenty years.

(B) Instead of 20 years of imprisonment, the same penalty shall be imposed from twelve to fifteen years.

3. It may degrade any other criminal penalty by not more than one third.

4. Except in the case of repetition, it may also reduce any sentence of a minimum of three years to a minimum of one year imprisonment.

5. If the court takes the mitigating reasons, it is not obliged to go down to the minimum penalty.


This is so embedded in Jordanian law, that it was even applied to a Jordanian who murdered his American wife in the US in 1994:


Mohammad Abequa, a U.S. citizen born in Jordan, confessed Wednesday in an Amman courtroom that he strangled his estranged wife in her New Jersey apartment in July. Abequa, 46, said he killed his 40-year-old Turkish-born wife, Nihal, to protect his honor, an argument accepted by Jordanian courts as a reason for a reduced sentence. He is charged with murdering his wife, whose body was found July 4 in the apartment in the community of Parsippany Troy-Hills, as well as kidnapping his children, Lisa, 6, and Sami, 3. Abequa brought the children to Jordan after his wife's death. In what was seen as an effort to get a reduced sentence, Abequa told a crowded courtroom that he lost his temper when his wife told him that the man leaving her house as he arrived was her boyfriend. 'I asked her who the man was, and she told me it was her boyfriend and showed me a new tattoo on her thigh that he gave her,' Abequa said. [emphasis added]

At the time, the article contended that though Abequa could face the death penalty in Jordan if he was found guilty of murder, he might be able to avoid execution if he could convince the court that it was an 'honor killing.'


But judicial sources doubted Abequa would receive a reduced sentence because the highly publicized case has been the focus of U.S. interest and personal attention from Jordan's King Hussein.

Those sources were wrong.


It was troubling enough to the victim's family that Mohammad Abequa, who murdered his wife in New Jersey in 1994 and fled to Jordan with their two young children, was sentenced to only 15 years by a Jordanian court.

But then yesterday came the news that the confessed killer had been pardoned for his crime after serving five years in prison, and had been set free.

So how to begin to deal with this tragic injustice embedded in Jordanian law?

In an interview with Reem Abu Hassan, a lawyer and former minister of Social Development in Jordan, we are told that honor killings have nothing at all to do with Islam.


“We discovered that (Jordan) had taken this article from the Syrian penal code, which was taken from the French penal code,” Hassan explained. “So the basis for it was France: French law, not Islamic, nor Arabic.”

She noted: “Of course, France had abolished this article, and honor crimes were never again a problem the French legal system had to face.”

I realized how damaging colonization has been.

I felt a surprising sense of pain — but also hope — at this revelation. It made me realize just how damaging colonization has been for the Middle East.

Let's put aside the irony of the long history of the colonization by the Islamic expansionism that itself reached as far as France.

Is there a basis for Jordan blaming France?
Then how to explain how widespread honor killing is within the Arab world?

The Arab News article quoted above provides the following chart

Is the influence of France really that widespread?
Are these honor killings just another manifestation of the kind of abuse found the world over?

That is what Rashida Tlaib would have us believe: 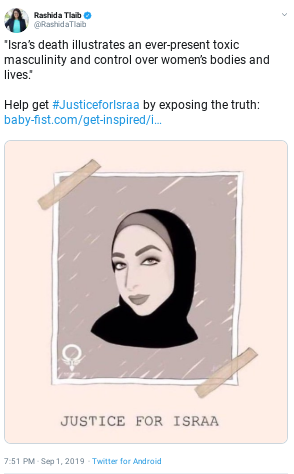 Are honor killings just another form of domestic violence?

Phylis Chesler, an American writer, psychotherapist, and professor emerita of psychology and women's studies at the College of Staten Island, takes a closer look at the distinction between honor killings and domestic violence, noting that


The frequent argument made by Muslim advocacy organizations that honor killings have nothing to do with Islam and that it is discriminatory to differentiate between honor killings and domestic violence is wrong.

She demonstrates that there are differences, and that honor killings are in fact to an alarming degree an Islamic phenomenon. One key difference between domestic violence and Islamic honor killings is that unlike honor killers who tend not to be condemned by Muslim society

the batterer-murderer is seen as a criminal; no one defends him as a hero. Such men are often viewed as sociopaths, mentally ill, or evil.

Here is a chart from Chesler's 2009 article Are Honor Killings Simply Domestic Violence? outlining the differences:

The difference is more than between the Arab world and the West. There is also a distinction between Islam and other religions:


Families that kill for honor will threaten girls and women if they refuse to cover their hair, their faces, or their bodies or act as their family's domestic servant; wear makeup or Western clothing; choose friends from another religion; date; seek to obtain an advanced education; refuse an arranged marriage; seek a divorce from a violent husband; marry against their parents' wishes; or behave in ways that are considered too independent, which might mean anything from driving a car to spending time or living away from home or family. Fundamentalists of many religions may expect their women to meet some but not all of these expectations. But when women refuse to do so, Jews, Christians, and Buddhists are far more likely to shun rather than murder them. Muslims, however, do kill for honor, as do, to a lesser extent, Hindus and Sikhs.

Her findings reflected the Arab News graph in how widespread honor killings are in the Muslim world.

In this study, worldwide, 91 percent of perpetrators were Muslims. In North America, most killers (84 percent) were Muslims, with only a few Sikhs and even fewer Hindus perpetrating honor killings; in Europe, Muslims comprised an even larger majority at 96 percent while Sikhs were a tiny percentage. In Muslim countries, obviously almost all the perpetrators were Muslims. With only two exceptions, the victims were all members of the same religious group as their murderers.

You cannot pin this all on France.

Here is the Jordanian law in Article 340 again, this time with revisions made in 2010:

Now the law specifies that the killing has to be done "immediately," apparently to allow for this to be a crime of passion as opposed to being premeditated.

Also, now in the spirit of evenhandedness, the woman is allowed to kill her husband as well, but without mentioning other relatives as is allowed to the man.

But the point of all this is not about nitpicking.

This is about dealing with the problem of honor killing by addressing the problem itself. Treating honor killings as just another manifestation of domestic abuse just avoids the issue and fails to understand this for what it is. That is why these public grassroots protests are an important step towards attacking the problem. There is more to be done than just applying a bandage to the existing law.

Now there are signs that people are beginning to realize that.

"No country faced with comparable threats can boast
a better record of human rights, a higher regard for
the rule of law, or greater efforts to reduce civilian casualties.

Nor has any country in history contributed as much
to humankind — medically, scientifically, environmentally,
academically, culturally — in so short a time than has
Israel in its relatively brief existence as an independent state."