Palestinian Democracy at the Voting Booth

In an October 20 editorial, "A Vote for Hamas" The Washington Post concludes:

...if Mr. Bush is going to keep betting on Mr. Abbas, he should do more to help him succeed. Palestinian security forces cannot confront Hamas partly because they lack adequate training and weapons. Mr. Abbas also suffers politically from Mr. Sharon's foot-dragging in concluding agreements to allow the movement of goods and people from Gaza and from Israel's recent redoubling of West Bank roadblocks it promised to lift months ago. The United States can use its influence to ease those problems and to accelerate Palestinian economic reconstruction between now and January. Meanwhile, it can more clearly articulate, around the region, the principle that Islamic movements -- including those with fundamentalist ideologies -- must have a place in Muslim democracies, but that they must also check their guns at the door. [emphasis added] 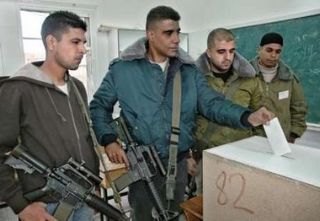 Palestinian Zakareia Zubaidi, a local leader of the al-Aqsa Martyrs Brigades and other Palestinian militants cast their votes in the West Bank town of Jenin November 25, 2005. Fatah, the largest Palestinian faction, held its first primary election on Friday but polls remained shut in parts of the West Bank and in Gaza in what officials called a sign of internal divisions.

I guess they're still working on that one.

And who are the big winners?

Imagine the campaign promises: 2 chickens in every pot and a Kassam rocket launcher hidden in every garage.

We may find out what his campaign promises will be, if Yossi Beilin has his way:

"I think today there is no doubt that he is one of the top leaders in the Palestinian street," said Yossi Beilin, leader of the Meretz/Yahad party. Prime Minister Ariel Sharon has stated that if his new Kadima party forms the next government, Meretez/Yahad is a likely coalition partner.

Beilin backed up his calls for releasing Barghouti by claiming it would help promote democracy in the PA. "Barghouti heads one of the Palestinian camps that do want peace," he said, "and so this is the moment to end his sentence... in preparation for an historical peace agreement with Israel."

Beilin's claim is somewhat undercut by one of Barghouti's buddys:

While Beilin maintained that Barghouti was a "man of peace", Barghouti's
colleague in the Fatah, PLC representative Qadura Fares, explained in Hebrew
in a live interview broadcast on the program that he and Barghouti support
"negotiations and other peaceful means with Israel as long as Palestinian
aspirations may be realized through negotiations. If Palestinian aspirations
can't be realized through peaceful means then the aspirations will be
realized via resistance."

So Barghouti is a pragmatic man of peace, just like Abbas.

Must be something in the air. Michelle Malkin has a post about a convicted murderer in the US who was nominated for a Nobel Peace Prize and is being considered for clemency:

Convicted murderer Stanley "Tookie" Williams, the co-founder of the violent Crips gang who is on Death Row in California, is Hollyweird's current cause celebre. He is scheduled to be executed on Dec. 13 after 24 years of legal wrangling. The San Francisco Chronicle reports today that Gov. Arnold Schwarzenegger has decided to hold a clemency hearing Dec. 8.

Malkin quotes Debra J. Saunders, who points out how ludicrous this is:

The whole "redemption" line is a joke. As Williams' former prosecutor Robert Martin once told me, redemption requires an admission of guilt, facing up to what you did and expressing remorse. Williams has done none of the above, yet newspaper editorial pages (including The Chronicle's) and various do-gooders (including some Ninth U.S. Court of Appeals judges) have been pushing for the governor to grant Tookie clemency.

There are a number of similarities between Barghouti and the convicted murderer:

This could be the beginning of a whole new policy. Don't just release the terrorists; give them all political positions.