(Thank you A Whispering Soul and Welcome to visitors from Haveil Havalim #48. Please take a moment to go to the home page and take a look at things from the top.)

The way things are worded are important. If you ask someone a loaded question about whether they still beat their wife, both a 'no' and 'yes' answer still constitutes an admission. Both a Jewish citizen and Arab citizen of Israel are Israelis--but if you say that an Israeli committed a crime, people automatically assume you are talking about a Jew.

The way something is worded in an article can imply something about those who wrote the article as well as about the subject.

Media bias is a tricky thing. Is it a result of an agenda, lack of sensitivity, or just plain carelessness? After the latest terrorist bombing in Netanya, AP--via Yahoo--regales us with the following headline: 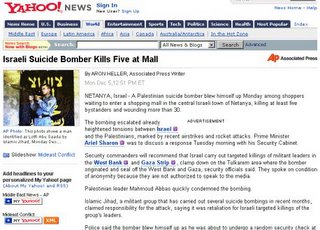 The odd thing is, the article itself is not all that slanted. The journalist who wrote it is unlikely to have had anything to do with the headline--an editor at AP probably takes care of that. Among other things, the reporter who wrote the article has a degree from Tel Aviv University and served in the IDF. Personally, I've seen too many clearly slanted articles matched with journalists whose names do reassure me of their impartiality.

Justify This! also noticed this headline, and found another one at Scotsman.com: Five Killed in Israeli Suicide Bomber Attack.

A SUICIDE bomber blew himself up in a line of shoppers in the northern Israeli town of Netanya today, killing at least five people and wounding 35 others.

The Al Aqsa Martyrs' Brigades has claimed responsibility for the latest suicide bombing.

Police said the bomber blew himself up in a line of people going through a security checkpoint at the entrance to the busy mall.

It's a minor point, but it seems a bit odd that the short piece does not bother to directly identify that the terrorist was a Palestinian Arab, but instead refers to the fact indirectly in the second paragraph when it says which terrorist group took credit.

Most issues of media bias when it comes to Israel are more blatant and biased--not an issue of a sloppily written headline, as in this case. But just how sloppy is the headline?

Yahoo stories are odd. You can trace back the development of the story because the URL contains what appears to be the version of the story. 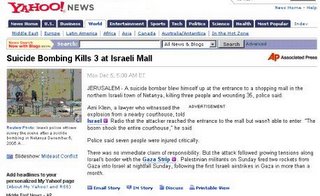 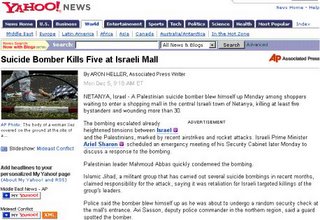 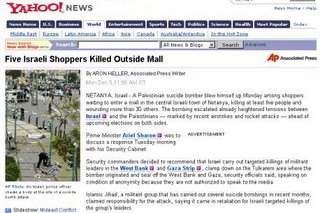 Whatever the numbers at the end of the URL indicate, one thing is clear--there were a number of different headlines that were used before settling on the current one.

All the more reason to ask why.

I received the following email from Aron Heller, who wrote the AP article:

Thank you for writing.

Obviously, this headline was a terrible error that fell somewhere in the
editing process. That was not the headline that left our bureau in
Jerusalem and probably someone in New York or at Yahoo replaced
"Palestinian" with "Israeli."

Unfortunately, we have little control of our stories once they hit the
wire. I will be sure to forward your e-mail to the appropriate authorites.
Thanks again.
Aron