Yes, Mahmoud, There Was A Holocaust

Iranian President Mahmoud Ahmadinejad is at it again. On the topic of the Holocaust, he said:

"If you committed this big crime, then why should the oppressed Palestinian nation pay the price?" Ahmadinejad asked rhetorically. 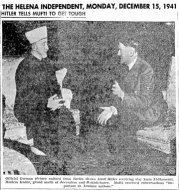 Husseini and Hitler were good friends:

“Our fundamental condition for cooperating with Germany was a free hand to eradicate every last Jew from Palestine and the Arab world. I asked Hitler for an explicit undertaking to allow us to solve the Jewish problem in a manner befitting our national and racial aspirations and according to the scientific methods innovated by Germany in the handling of its Jews. The answer I got was: 'The Jews are yours.'”
Former Mufti of Jerusalem, Haj Amin al-Husseini in his post-WWII memoirs.

And even closer partners.

Storobin quotes Joseph Schechtman, auther of "The Mufti and the Fuehrer", who wrote that Husseini played a role in the Final Solution:

But Husseini was not the only Moslem allied with Hitler during WWII. Husseini was very active helping his Nazi friends:

He was officially received by Adolf Hitler on November 28, 1941, who agreed to establish a bureau for al-Husseini which was used to spread propaganda on behalf of Nazi Germany, organize spy rings in Europe and the Middle East, and most importantly, establish Muslim Nazi SS divisions and Wehrmacht units in Bosnia, the Balkans, North Africa and Nazi-occupied parts of the Soviet Union. After the meeting, the Mufti was also named SS Gruppenfuehrer by Heinrich Himmler and referred to as the “Fuhrer of the Arab World” by Adolf Hitler himself. [26]

The largest Muslim Nazi SS unit was the 13th division known as “Hanjar.” Husseini also organized smaller, less efficient units, including the 21st Waffen SS division known Skanderbeg (made up predominantly of Croatians) and the 23rd Waffen SS division known as Kama and made up mostly of Albanian Muslims. Thus, the Hitler’s Mufti organized or helped to organize three out of 27 Waffen SS divisions formed before 1945 (eleven other SS divisions were formed in 1945, but most of these were of questionable caliber and accepted soldiers of questionable skill). According to the Encyclopedia of Holocaust, Husseini “organized in record time” Croatian units that went on to massacre hundreds of thousands of Serbian Orthodox Christians. Jacenovac, the third largest death camp where over 200,000 people met their death, was run by Croatian Ante Pavelic with the aid of al-Husseini. In all, at least 800,000 Yugoslavian civilians were murdered by pro-Axis regimes of Utasche and Pavelic, with significant aid from the units established by the “Fuhrer of the Arab World.” [27] Tens of thousands of Jewish people outside Yugoslavia also perished when the Mufti persuaded not to trade them for German POW’s held by the Allies.

Mr. Ahmadinejad, the Palestinians are not paying any price--the Jews already have. And a role was played by Moslems in general and one certain Palestinian in particular.

Note: Go to http://indonesian.knowislam.info/forum/viewtopic.php?t=144 for other pictures of the Mufti in collaboration with the Nazis, and check out http://www.tellthechildrenthetruth.com

Technorati Tags: Israel and Palestinians and Holocaust and Mufti.