The following by David J. Rusin is reposted here with permission:

by David J. Rusin
FrontPage Magazine
February 1, 2013
http://www.islamist-watch.org/12244/cair-leader-runs-for-new-york-city-council
Zead Ramadan, board president of the New York chapter of the Council on American-Islamic Relations (CAIR), is eyeing a bigger platform from which to promote his Islamist agenda: a seat on the New York City Council. If he prevails, the city that endured 9/11 will count among its lawmakers a senior official in an organization linked to the financing of terrorists and intent on frustrating law enforcement efforts to foil the next jihad plot. 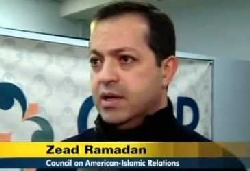 David J. Rusin is a research fellow at Islamist Watch, a project of the Middle East Forum.

February 1, 2013, Update: Middle East Forum president Daniel Pipes had an amusing encounter with Zead Ramadan in 2011, when both were invited to participate in a panel discussion on Abu Dhabi Television. "Ah, the devil himself," Ramadan remarked after spotting Pipes in the studio. More details, including the whoppers that Ramadan told during the program, are documented here.

Email ThisBlogThis!Share to TwitterShare to FacebookShare to Pinterest
Labels: CAIR