Motzei Shabbat (After Shabbat)
When last I wrote, I expressed the fervent hope that by the time I posted again the kidnapped students would have been brought back alive.  Days have gone by since then, but, most regretfully, we do not yet have them home.  I can do no more here than report on what is transpiring, to the degree that we are privy to information.
The mood of the nation is somber, watchful.  But what shows clear is a spirit of unity - Israel is with the boys and their families, in prayer, in thought, and in written word.  The Operation that is being conducted to find the boys and bring them back is called Operation Brothers Keeper, which tells us something as well.
We see prayers for them in different locales at different times, including...

A prayer service at the Kotel last Sunday, attended by some 25,000 people. 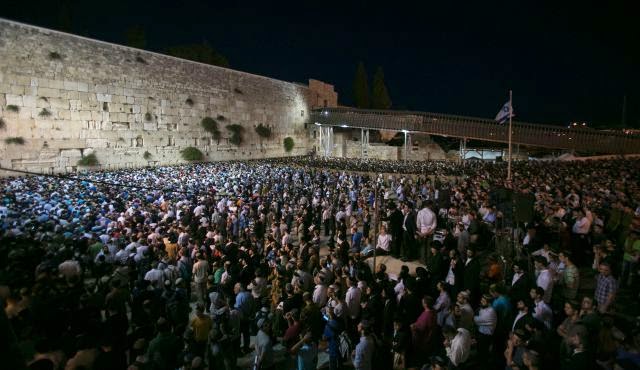 Credit: Olivier Fittousi
Special services at the Mekor Chaim Yeshiva, where two of the boys study: 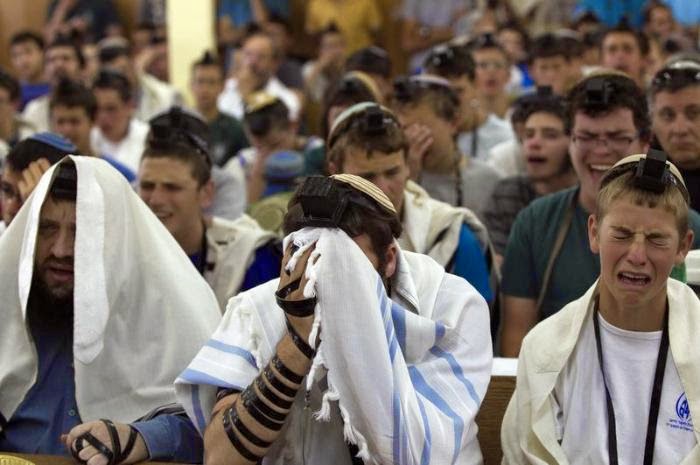 Credit: Reuters
A prayer rally in Talmon, hometown of Gilad Sha’ar, which was attended by both Chief Rabbis.
And in many synagogues last Shabbat and this.
~~~~~~~~~~
Lest you think it is only members of the religious community who are praying...
Finance Minister Yair Lapid, on visiting the family of abducted Gild Sha’ar, confessed that:

"I haven't prayed for six years. Since the bar mitzvah of my son I haven't been in a synagogue. When the story of your sons broke, I looked through the entire house searching for my grandfather's siddur [prayerbook]. I sat and prayed."

And it has been revealed that Interior Minister Gideon Sa'ar has begun to observe Shabbat and attend Torah lessons.

Read: Lapid Prays For First Time in Six Years for the Abductees
~~~~~~~~~~
It is not my practice to quote outgoing president Shimon Peres, but he was on to something when he observed:

“Three families like this can lift up a nation to heights previously unknown, and I’m not exaggerating.  It’s been several days that Israel is different, unified, joined, praying, fighting.”

This has, without question, been the case because of how the families of the kidnapped boys are conducting themselves: with extraordinary faith and courage.
Here you see all three sets of parents, with Racheli Frankel, mother of Naftali Frenkel, declaring:

“We feel deeply embraced by the entire Jewish nation, which accompanies us throughout the day, which gives us so much support. We ask that the prayers continue… That’s it, all we want is to hug our children. Eyal, Gil-ad, Naftali, we love you, we miss you, be strong, be strong!” 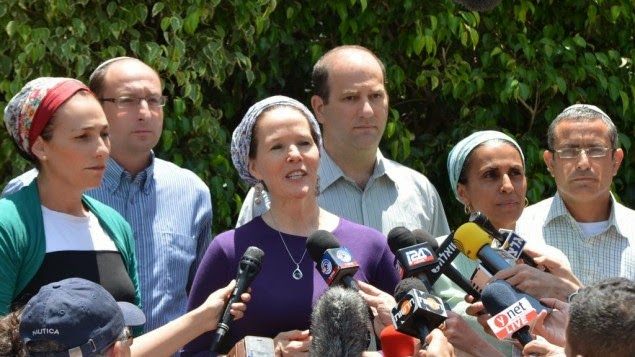 ~~~~~~~~~~
Naftali Frenkel’s uncle, Yishai, had words that brought a bit of comfort yesterday, in a radio interview:

“Of course I can't tell you anything, but I can say that the indications we're receiving - on the basis of intelligence and not just religious faith - is that the boys are alive.

"In defense of the security system, it's important to say that almost from the start of the incident, there have been representatives in each of the families' homes 24/7. The immediate family of course know more than what's going on in the media."


Read: Uncle of kidnapped teen: The boys are still alive
~~~~~~~~~~
IDF operations against Hamas are two-fold in purpose at this point.
First, of course, are the efforts to find the boys and bring them safely home.  I’ve written already about the arrests and interrogations, the searches, the gathering of intelligence, all of which continue and intensify.
Yesterday, Prime Minister Netanyahu said that Israel “knows more than we knew a few days ago,” but cautioned that patience is necessary.
~~~~~~~~~~
At the same time, actions are being taken to seriously weaken Hamas, in order to reduce its capacity to take over in Palestinian Authority areas in Judea and Samaria.  What is currently happening is the one of the largest counter-terrorism operations since Operation Defensive Shield in 2002 during the second intifada.  Over 300 Hamas “activists” have been taken into custody.  More than 50 prisoners released in the trade for Gilad Shalit have been picked up and will be returned to prison because of their involvement in terrorism.
At the same time, Hamas institutions are being closed and money and weapons are being seized.
Ten IDF brigades are involved in this major effort, but the approach is still restrained in order to avoid inflaming the Arab population of the area or causing numerous Arab casualties.  Already, however, there are reports of growing resistance, and army clashes with Palestinian Arabs in Jenin, Bethlehem and Bir Zeit. As the operation continues, the likelihood of armed clashes increases.
Yaakov Lappin, writing in the JPost, refers to speculation as to whether the kidnapping was instituted by the local Hamas in Hevron, or as the result of orders from Hamas’s military wing in Gaza, Izz ad-Din al-Kassam Brigades. Security sources have noted, as well, a recent speech by Hamas politburo head Khaled Mashaal, in Doha, that may have been a coded green light for kidnapping Israelis.

Read: Security and defense: The pressure cooker
~~~~~~~~~~
In the process of this operation, there is the hope, as well, that Hamas can be delegitimized in the eyes of the world, which was, as the JPost’s Herb Keinon points out, beginning to accept this terrorist entity as a legitimate political player.  The US and the EU had already agreed to support a unity government that had Hamas backing.  Then, down the road would have come PA elections, with Hamas moving into place as a major player, and the world finding a way to legitimize this.  The goal here is to expose the nature of Hamas in a manner that will make this scenario considerably less likely.
Avi Dichter, former head of the Shin Bet, has observed that Gilad Shalit was kidnapped shortly after a Fatah-Hamas unity government was formed in 2006, which parallels the current kidnappings shortly after another unity government has been formed.  He does not see this as a coincidence.

Read: The kidnappings: Using recent history to help determine a course of action
~~~~~~~~~~
© Arlene Kushner. This material is produced by Arlene Kushner, functioning as an independent journalist. Permission is granted for it to be reproduced only with proper attribution.