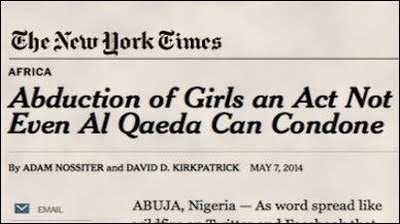 Why are some of the biggest Western mainstream media outlets—especially the New York Times (NYT)—often apologetic, not only for radical Islamists, but for al-Qaeda, an organization responsible for, among other atrocities, killing nearly 3000 Americans on September 11, 2001?

A recent NYT report titled "Abduction of Girls an Act Not Even Al Qaeda Can Condone" tries to exonerate al-Qaeda of the actions of another jihadi organization, Nigeria's Boko Haram—when both groups are not only affiliated but remarkably similar in outlook and method. The report's opening sentence summarizes its thesis: "As word spread like wildfire on Twitter and Facebook that Nigerian militants were preparing to auction off more than 200 kidnapped schoolgirls in the name of Islam, a very different Internet network started quietly buzzing too," one which, according to the NYT, reflects "the dismay of fellow jihadists at the innocent targets of Boko Haram's violence":

"Such news [abduction of Nigerian schoolgirls] is spread to taint the image of the Mujahedeen," wrote one dubious poster on a web forum used by Islamic militants whose administrator uses a picture of Osama bin Laden. "I have brothers from Africa who are in this group," attested another, insisting that they were like "the Quran walking the earth [i.e., righteous and just]."

Boko Haram, the cultlike Nigerian group that carried out the kidnappings, was rejected long ago by mainstream Muslim scholars and Islamist parties around the world for its seemingly senseless cruelty and capricious violence against civilians. But this week its stunning abduction appeared too much even for fellow militants normally eager to condone terrorist acts against the West and its allies.

"There is news that they attacked a girls' school!" another astonished poster wrote on the same jihadi forum …

The NYT's assertion that Boko Haram's "stunning abduction appeared too much even for fellow militants" is strange indeed.

The fact is, this "stunning abduction" pales in comparison to the many other atrocities Boko Haram has committed, and as documented in Gatestone Institute's Muslim Persecution of Christians series, where not a month goes by without numerous atrocities committed by the Nigerian jihadis, including the bombing or burning of hundreds of churches, especially on Christmas Day and Easter Day, which have left hundreds of worshippers dead or dismembered in the last few years.

Indeed, Boko Haram's jihad has resulted in more Christians killed than in the rest of the world combined.
As for the recent abduction, there is certainly nothing "stunning" about it. In fact, back in 2012, Boko Haram warned that it would do just this, declaring that it was preparing to "strike fear into the Christians of the power of Islam by kidnapping their women." Before and since then it, has kidnapped, raped, and/or converted countless Christian girls.

Perhaps the only thing "stunning" is that this latest raid on schoolgirls, the majority of whom are Christian, was widely reported and managed to reach the Western mainstream.

Thus it's not the act of abduction itself that, as the NYT puts it, is "too much even for fellow militants"—but rather that the world heard about it. Hence why Muslim clerics and the NYT had to respond—the former with formal disavowals of Boko Haram, the latter with articles like this.

Next the NYT quotes a supposed al-Qaeda expert saying, "The violence most of the African rebel groups practice makes Al Qaeda look like a bunch of schoolgirls."

This is strange indeed. Is the incineration of nearly 3,000 Americans on 9/11 the act of a "bunch of schoolgirls"? (For a long list of atrocities committed by al-Qaeda and the Taliban before September 11, 2001—many which make the recent Nigerian abduction seem like child play—click here.)

The NYT is never the first to report on atrocities committed by jihadis against Christians and other minorities, but it is always first to try to whitewash and apologize for the jihadis' role whenever news of jihadi atrocities appears from other media outlets. The article, by Adam Nossiter and David Kirkpatrick, continues with information that is simply false:

Its [Boko Haram's] violence is broader and more casual than Al Qaeda or other jihadist groups. Indeed, its reputation for the mass murder of innocent civilians is strikingly inconsistent with a current push by Al Qaeda's leaders to avoid such deaths for fear of alienating potential supporters (emphasis added).

All this is nonsense. For example, in 2012—after it had decapitated countless Christian men and women on the accusation of apostasy as well as any number of other atrocities—far from being ostracized, Somalia's al-Shabaab was heartily welcomed into the al-Qaeda fold by Ayman Zawahiri.

As for Boko Haram, it too has deep connections to al-Qaeda. According to the United Nations Al-Qaida Sanctions Committee, Boko Haram is affiliated with the core leadership of al-Qaeda as well as its nearby Maghrebi branch.

Next the NYT declares that Boko Haram's extreme violence "was the subject of the dispute that led to Al Qaeda's recent break with its former affiliate, the Islamic State of Iraq and Syria."

This invention seems meant to distance al-Qaeda from yet another brutal savage Islamic organization, the Islamic State of Iraq and Syria [ISIS], which has also been committing any number of atrocities—including crucifying people, bombing churches, and raping non-Muslims. In reality, "atrocities" are hardly the reason for the conflict between ISIS and al-Qaeda. ISIS was committing atrocities even when it was connected to al-Qaeda. The dispute was about power politics. 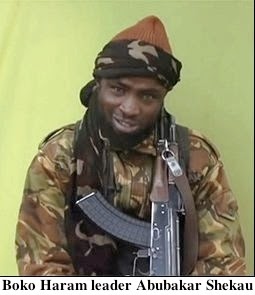 Why is the NYT trying so hard to make al-Qaeda and other Islamists look better—to exonerate them of the widely exposed crimes of Boko Haram and ISIS?

If people started to connect the dots and understand that allIslamists (al-Qaeda, Boko Haram, ISIS, al-Shabaab, al-Nusra Front, etc.), when they commit atrocities against non-Muslims, do it simply out of religious hate, the narrative that Western governments and mainstream media so stubbornly uphold—that al-Qaeda's terrorism, including 9/11, is based on "grievances against the West and Israel," and not Islamic supremacism and religious hate—would quickly unravel.

The NYT article even manages to invoke the grievance paradigm when discussing Boko Haram's terror: "Boko Haram tapped into growing anger among northern Nigerians at their poverty and lack of opportunity as well as the humiliating abuses of the government's security forces." Boko Haram may well have tapped into a poverty level— most people in "developing countries," including southern Nigeria, are poor—but the NYT totally disregards that many noted jihadis are doctors, engineers, well-educated and often affluent, including al-Qaeda leader Dr. Ayman al-Zawahiri, Mohammed Atta, and Major Nidal Hasan.

A recent Danish statistical study of immigrant families even finds that "Muslims [are] 218 percent more criminal in second generation than first," despite the fact that the second generation are more prosperous and educated than their first generation parents.

Yet the NYT insists on portraying terrorists as victims.
Al-Qaeda itself already put this question of grievances to rest. The late Osama bin Laden, in a private letter to Saudi Muslims, rhetorically asked:

Our talks with the infidel West and our conflict with them ultimately revolve around one issue… Does Islam, or does it not, force people by the power of the sword to submit to its authority corporeally if not spiritually? Yes. There are only three choices in Islam… Either submit, or live under the suzerainty of Islam, or die.