They have “lost hope”? But Raed was “an accounting student from a well-to-do family” (as Erlanger notes in passing). And Jabarin was a gainfully employed plumber. They were not impoverished, desperate, unemployed men driven by their poverty to commit murder. Their futures were entirely hopeful — if they had opted to lead normal lives.

“We are afraid”? Afraid of what — being shot while trying to murder Israelis? Well, here’s a radical idea: stop committing murder, and you won’t have anything to be afraid of.

These memes are unquestionably accepted, repeated and are an expected part of what passes for media analysis of the Palestinian Arab situation.

Another aspect of journalistic laziness is contained in a fifth meme,  addressed by Seth J. Frantzman who writes in his Terra Incognita column that it is time to Stop Pretending Terror Attacks Don't Target Jews. He points out that Palestinian terrorist attacks are sanitized by ignoring admissions that "I sought to kill Jews," with the media helpfully translating these into attacks on "settlers". The Palestinian media then picks up on this and refers to stabbing attacks in Tel Aviv and Beit Shemesh as “the process of attacking settlers” and “the martyr so-and-so stabbed settlers in Beit Shemesh” -- despite that neither place is located in the West Bank. Why? Because the Palestinians have picked up on the distinction the West has handed them: Jews become acceptable targets when they are "settlers".

The common use by Palestinian cartoons of Orthodox Jews to depict Israelis illustrates Frantzman's point that more than targeting Israelis or "settlers," the Palestinian terrorists are targeting Jews: 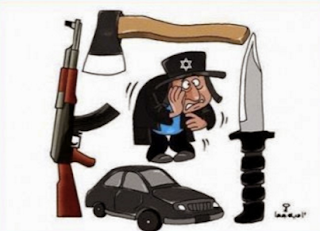 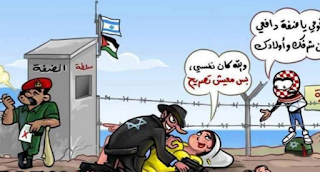 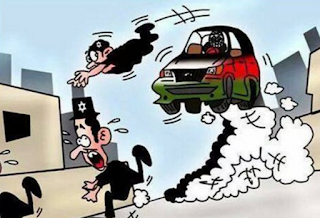 
It is obvious that the stereotypical depiction of Israelis is as Orthodox Jews. Many Palestinians who seek to target Israelis therefore will try to choose targets that they think symbolize Jews or Israel the most. Sometimes that is soldiers in the West Bank. If soldiers were the only target, then the commentators who claim it is only “resistance”, might be correct. But the vast majority of Palestinian attacks are not against soldiers, they are against others. Often these attacks have targeted Orthodox Jews.

The whitewash by the West and the media, claiming that it's all about "settlers" allows Palestinian terrorists off the hook -- and lets the West off the hook as well, seeing how skittish the West is about putting any pressure on the Palestinian Arabs to stop killing Jews.