Surely being a scholar means that this Salaita is a smart fellow -- that's what a scholar is, no?
Maybe not.

When I did an online search for "scholar," I got the following: 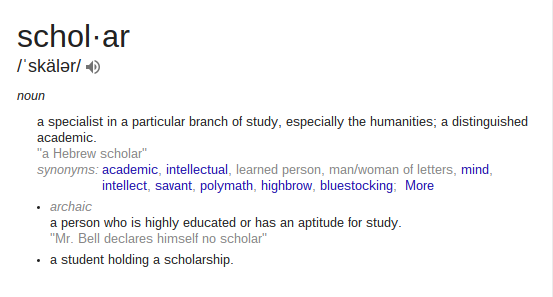 Apparently, it is passe and downright archaic to say that someone who is called a scholar is actually smart or educated. Instead of being defined by what he is, a scholar today apparently is defined by the position he holds. Also a scholar is distinguished. And what distinguishes Salaita?

Here are 3 snapshots of the many tweets by Salaita about Israel (Hat tip: Legal Insurrection, who has many more of Salaita's tweets): 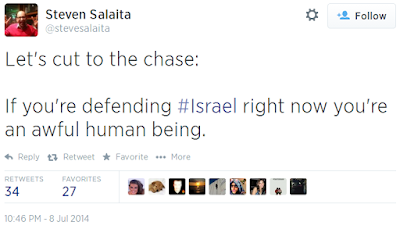 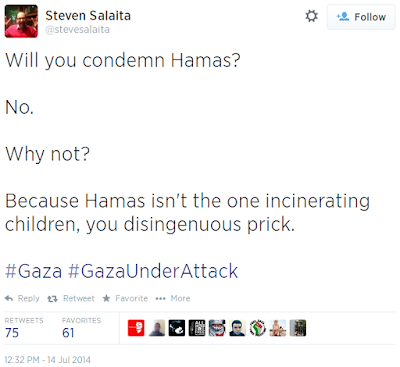 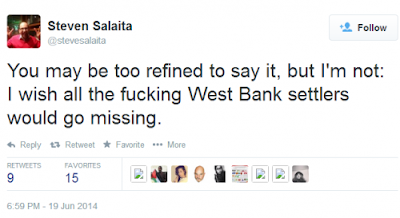 One definition of a "distinguished" person is one who "commands respect" -- obviously, that is not what we are dealing with here.

Salaita was recently among a number of speakers at SOAS (School of Oriental and African Studies), University of London.

UK Media Watch covered the Apartheid Week panel hosted at SOAS, and Salaita made himself at home.


He said that “humanising Palestinians undermines the Zionist project” and so Zionists associate Palestinians with Hitler and “have a fear of binationalism which is actual democracy” (this drew huge applause and cheers).

This claim Israeli demonization is quickly debunked by a look at the EoZ posters for "Apartheid Week", which features poster of prominent Arabs in Israel, including in the Israeli army, judiciary and Knesset -- and check out Elder of Ziyon's post for many, many more such posters. 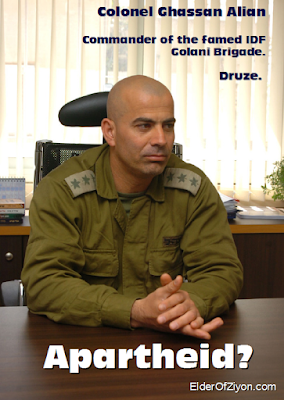 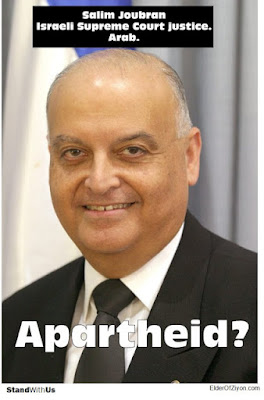 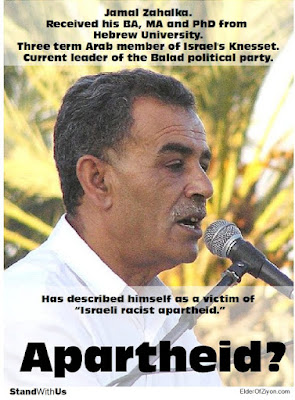 
“Israel directs so much of its violence at children and takes more Palestinian land for water and agriculture”.

Unlike Hamas, which instigates terrorist attacks on unarmed civilians, Israel has only attacked Hamas in response to terror attacks. Even then, Israel does not target civilians, let alone children. Israellycool notes that during Operation Protective Edge in the summer of 2014, Israel's care in avoiding children was supported by the Gaza Health Ministry-based list of casualties featured on Al Jazeera

Israellycool put together a chart based on that list: 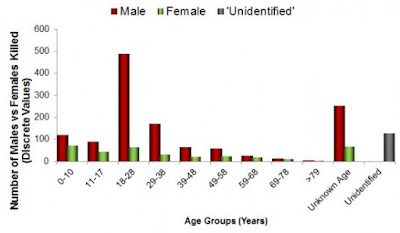 That chart clearly shows that the Al Jazeera list indicates that to the degree that any age group was targeted, it was the age group associated with terrorists.

As for Salaita's claim about water, myths about the water issue are addressed in The Myth of the Thirsty Palestinian.

A third claim by Salaita is his whitewashing of Palestinians throwing stones:


He then mused on the symbolism of Palestinians throwing stones. He said there’s a miniscule chance of harm from stones (although tell that to the family of Asher Palmer who was killed along with his one year old son when a Palestinian thrown rock smashed through their car windscreen).

He said Israelis see stone-throwing as “an act of rejection” and that “stones assume primordial importance and an existential anxiety”.

The Palmers are not the only casualties of stone-throwing Palestinian Arabs. According to Wikipedia, "at least 14 Israelis have been killed by Palestinian stone throwing, including 3 Arabs mistaken for Jews."

And a look at the long history of Arabs throwing stones at Jews indicates that anxiety has nothing to do with it.

In 1955, S. D. Goitein, in his book Jews and Arabs: Their Contacts Through the Ages, wrote:


In former times--and in remote places even today--it was common for Muslim schoolboys to stone Jews. When the Turks conquered Yemen in 1872, an envoy was sent from the Chief Rabbi of Istanbul to inquire what grievance the Yemenite Jews had against their neighbors. It is indicative that the first thing of which they complained was this molestation by the schoolboys. But when the Turkish Governor asked an assembly of notables to stop this nuisance,there arose an old doctor of Muslim law and explained that this stone-throwing at Jews was an age-old custom (in Arabic 'Ada) and therefore it was unlawful to forbid it. [p. 76, emphasis added]

In the book Eight years in Asia and Africa from 1846-1855, Israel Joseph Benjamin includes among the multiple indignities regularly suffered by Jews at the hands of the Muslims of Persia:


Under the pretext of their being unclean, they are treated with the greatest severity, and should they enter a street, inhabited by Mussulmans, they are pelted by the boys and mob with stones and dirt.[p 212]

Andrew Bostom gives another example in The Legacy of Islamic Antisemitism: From Sacred Texts to Solemn History

:
Contrary to Salaita, the "primordial importance" of stone throwing was as a means to persecute Jews, who then --- and now -- are the ones who are feeling the "existential anxiety.”

Whether in journalism or academia, taking a profession that used to be respected for honoring truth and twisting it into a form of activism inevitably leads to subjective conclusions, error and outright sloppiness. Regardless of whether it is inevitable or not, even if what one writes, reports or teaches serves the interests of a particular faction that should not be an excuse for tossing out all sense of propriety and standards.

But Steven Salaita apparently doesn't feel that way.
At least in Lebanon, home of Hezbollah, he can find a faction that appreciates his "work".
-----