Look for the Good

If there is good "stuff" happening in the Middle East, it is almost certainly happening in Israel.  In recent days, every time I post I want to end with some of that good stuff, but lose momentum after writing about all the bad.  And so today I will reverse procedure.
Abdu Razek, an Ethiopian boy of about nine who was severely mauled by rampaging hyenas in his small village, and disfigured as a result of his injury, has been brought to Israel for treatment. Hospitals in Ethiopia did not have the sophisticated equipment necessary for addressing his situation: he requires surgery on his head and major skin grafting on his face. 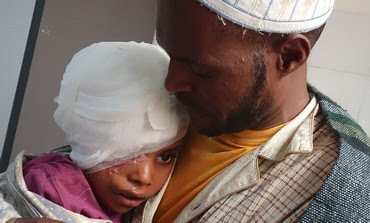 While funds are still being raised for his treatment, he was brought on Monday to the Western Galilee Hospital in Nahariya.  The hospital's director-general, Dr. Masad Barhoum, said:

“I’m proud to be a part of this health care system that acts without hesitation to save the life of a child, not just those in Israel but also to provide humanitarian aid internationally when we are able. This shows the unique nature of Israel.”  (Emphasis added)

The United Jewish Communities, the Jewish Agency, the Joint Distribution Committee and the Foreign Ministry collaborated to make the this happen; Dr. Rick Hodes, chief physician of the JDC’s medical mission in Ethiopia, started the process by calling attention to the boy's plight.

Read: Boy injured by rampaging hyenas brought to Israel for treatment
Please, share this story about Israel, which is so often vilified as "racist" and "apartheid."
~~~~~~~~~~
A similar story about Israeli medical care can be told about injured Syrians -- at least 100 by some counts -- who have crossed the border seeking Israeli medical help in the recent months of the civil war.
Most of these Syrians come to Ziv Medical Center in S'fat, which is in the north, not far from the Syrian border; there are three other northern hospitals also receiving Syrians.  The treatment they provide often saves lives.
Doctors have no information on whether their patients, frequently in critical condition, are civilians, members of the Syrian army, or rebels.


"It’s our duty as a regional hospital," says Dr. Amram Hadary, director of the trauma unit at Ziv. "We cannot ignore that the Syrian conflict is happening behind our door. We cannot close our eyes, ears and hearts to what is happening there. It’s a catastrophe."

“We treat patients regardless of religion, race, nationality, and give the best care we can provide,” Ziv Director, Dr. Oscar Embon, explains.

"For me, they are human beings in need of treatment. I’m not thinking of them as enemies. I’m glad as a physician that we have the opportunity to exercise humanistic principles. I’m very glad to be able to do what we’re taught to do.

"...Because of the critical condition in which many of them arrive, we don’t question who they are. It is irrelevant. They are patients and are treated with the best measures we have in the hospital. Everyone gets the same treatment.

"One of our raisons d’être is not only to treat the civilian population here but everyone who needs trauma treatment in the area."

Israel’s Health Ministry and Defense Ministry have agreed to jointly fund the hospital treatment for Syrians.

Read: Israeli Doctors Save Syrian Lives
Where else in the world, my friends, would we encounter this attitude?
~~~~~~~~~~
Archeologists in Israel have announced that they have found remnants of the ancient Tabernacle -- the center of Jewish worship in the Land of Israel that pre-dated the Temple -- that was at Shilo between the conquest of the Land of Israel by Joshua and the rise of King David.
You can find details here: Archaeologists: We Found Shilo Tabernacle
~~~~~~~~~~

"The delay is over fears that such deliveries will not be decisive and the arms might end up in the hands of Islamist rebel groups.

"Both the Senate and House of Representatives intelligence committees have expressed reservations behind closed doors at the effort by President Barack Obama's administration to support the insurgents by sending them military hardware."

Read: Congress Holding Up Transfer of Weapons to Syrian Rebels
This is certainly good news.  Some decision makers in the US have their heads screwed on properly, even if the resident of the White House does not.  Indeed, weaponry might end up in the hands of Islamist rebel groups!
~~~~~~~~~~
I turn now -- sigh...there seems little choice -- to the bad news, with the observation that situations are shifting so rapidly it's difficult to keep track.  What is more, there are often conflicting reports on any given situation, so that nailing down the facts is a challenge.
And I want to emphasize one point critical to our understanding of what is happening in the Middle East:
We are witnessing an intensifying Sunni-Shia war; this fact must be kept in mind as we consider patterns of attacks, surprising new alliances and movements across borders.
~~~~~~~~~~
There was an explosion at about noon today in Dahiyah, a southern suburb of Beirut that is a Hezbollah stronghold.  There are some 53 wounded and possibly one dead.  The source of the explosion is believed to be a car bomb estimated as weighing 40 kilo (about 18 lb.).  According to the Daily Star (Lebanon) the blast left a crater two meters wide and over two meters deep, and destroyed 15 cars in the parking lot where it took place.  Plumes of black smoke rose in the air. 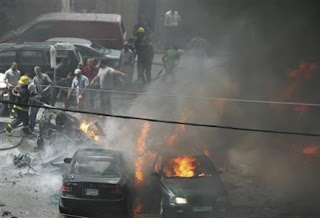 Credit: Israel Hayom
~~~~~~~~~~
Unsurprisingly, Hezbollah pointed a finger at Israel.  But it's looking as if responsibility lies elsewhere:  There were reports of the sounds of celebration (firecrackers, gunfire) following the bombing, in the Bab Tabbaneh neighborhood of Tripoli (Lebanon), where there have been anti-Shiite clashes.
At first an official with the Free Syria Army claimed responsibility, and then a spokesman for Free Syria denied involvement.
Lebanese Interior Minister Marwan Charbel said the attack was "a criminal act aimed at destabilizing the country and creating Sunni-Shiite sectarian strife."

"The war in Syria has found its way to Lebanon long ago because of Hezbollah's involvement in it. You can see it in Tripoli, Beirut and Sidon and in this morning's car bomb attack.  This fight is between the Sunnis and the Shiites and Israel will not intervene in it."

Read: Hezbollah blames Israel for Beirut bombing
~~~~~~~~~~
Israel is being charged with responsibility for more than today's blast in Cairo:
I had written yesterday about a mysterious blast in the Syrian port city of Latakia, and the host of different theories circulating regarding how the attack was generated.  Israel was said to be "studying the situation."
Now a spokesman for the Syria Free Army Supreme Military Council says that the site of the attack was the navy barracks at Safira, near Latakia. His claim is that a rebel intelligence network has verified that newly arrived Yakhont missiles were being stored there.
They were hit in a pre-dawn raid on Friday, he says, and the force of the blast indicated weaponry beyond anything the rebels possess but consistent with a military such as Israel's.
Asked by reporters about the blasts at Latakia, Defense Minister Ya'alon said:

"We have set red lines in regards to our own interests, and we keep them. There is an attack here, an explosion there, various versions - in any event, in the Middle East it is usually we who are blamed for most."

This -- of course -- tells us nothing concrete.  "we have red lines in regards to our own interests, and we keep them" is as close to acknowledgment of involvement that we will get.
~~~~~~~~~~
The Yakhont is a Russian anti-ship cruise missile.  Russia provided such missiles to Syria in May, in spite of Israeli and US protests. 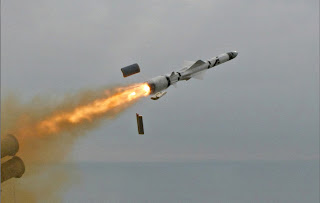 Credit: praag
The concern in Israel has been that Hezbollah would receive Yakhonts from Assad and use them against our navy as well as our Mediterranean-based gas rigs.

Read: Syria naval base blast points to Israeli raid
~~~~~~~~~~
I would like to say "Hurray for us!" and put this in the good news section. But I don't really know that we destroyed those Yakhonts, do I?  So I'll leave it here.  In any event, good that them were apparently destroyed.
~~~~~~~~~~
Things have quieted down considerably on the streets of Cairo today, which is most certainly not bad news.  What is more, the interim president, Adli Mansour, is moving quickly, in an effort to placate various elements.  He has now announced that parliamentary elections will be held in six months, with presidential elections to follow.
And he has appointed an interim prime minister: Samir Radwan (pictured below). An economist by training -- who studied at the University of London -- he is a former finance minister appointed not by Morsi, but by Mubarak.  He is said to have a liberal perspective and an interest in employment issues; he severely criticized the last Egyptian budget.
Nothing, but nothing, is more important than the economy in stabilizing Egypt.  It remains to be seen what his contribution to this stabilization will be, if any. 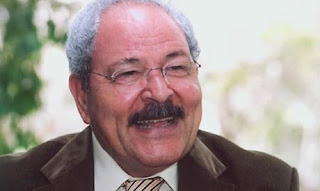 What is of significance is that the extreme Islamist Nour party agreed to accept his nomination because he is a technocrat -- a person with technical expertise and not just a politician, and has had government experience.  While the Brotherhood was pushed out of power, the Nour party -- Egypt's second largest Islamist party -- had been courted by the military as a participant in negotiations over the new government.  There was an eagerness to show inclusiveness, with Islamists involved, if not the Brotherhood.
Just yesterday, Nour, which had opposed AlBaradei, had announced it was pulling out because of the killing of pro-Morsi protesters. But apparently now it has reversed its position.
The hope is that a full cabinet of technocrats will be appointed soon.
The news today brought a modicum of hope to Egypt, and the country's main shares index rose 1.7 percent.

Read: Nour Party would accept former finance minister as PM
~~~~~~~~~~
Be aware: None of this provides a promise that things will go smoothly in Egypt now. The Brotherhood is still there.  And a fickle mob is watching.
The Public Prosecutor has begun investigations of pro-Morsi people who generated the riot outside Republican Guard headquarters.  Some 650 people have been detained so far.
~~~~~~~~~~
© Arlene Kushner. This material is produced by Arlene Kushner, functioning as an independent journalist. Permission is granted for it to be reproduced only with proper attribution.
If it is reproduced and emphasis is added, the fact that it has been added must be noted.


Technorati Tag: Israel and Hezbollah and Samir Radwan and Egypt.