On Closed Embassies, the Worldwide Travel Alert,
and Wimpitude

In April, the city of Boston was effectively under military curfew because two terrorists were on the loose. Now, fears of al-Qaeda attacking has led the U.S. government to close 21 U.S. embassies in Muslim-majority countries and then issue aworldwide travel alert announcing that "Terrorists may elect to use a variety of means and weapons and target both official and private interests. U.S. citizens are reminded of the potential for terrorists to attack public transportation systems and other tourist infrastructure."

The chairman of the Joint Chiefs of Staff, Gen. Martin Dempsey, said that the two steps result from "a significant threat stream" and so the authorities "are taking it seriously." 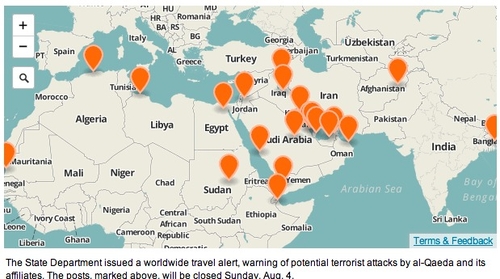 It'll be a happy day when American embassies are again built in busy downtown intersections out of normal materials - and not, as they are now, bunkers located in distant lots surrounded by high fences. Such a change will only be possible when the safety of Americans depends not on walls, metal detectors and Marine guards, but on the deterrence established by years of terrible retribution against anyone who so much as harms a single American citizen.

Deterrence, not shuttering the bunkers we call embassies, is the solution. Maybe Obama's successor will understand this imperative. (August 3, 2013)