THE Question of the Moment

Is Obama going to give the word to bomb Syria?
The parameters of the situation are not simple.
~~~~~~~~~~
An exceedingly strong case can be made for the fact that he must at this point.  For deterrence matters, and threats made must be acted upon.
It just about a year ago that the president said:

"...we have been very clear to the Assad regime, but also to other players on the ground, that a red line for us is we start seeing a whole bunch of chemical weapons moving around or being utilized.  That would change my calculus."

Read: Enforcing a 'red line' in Syria
Obama cannot fail to follow through on what he said without causing damage -- weakening the US position and essentially giving the Assads of the world a license to conduct themselves as they please.
~~~~~~~~~~
Prime Minister Netanyahu, in a press conference with French Foreign Minister Fabius yesterday, carried this thought to its logical conclusion:

"...Assad’s regime is not acting alone.

"Iran, and Iran's proxy, Hezbollah, are there on the ground playing an active role assisting Syria.

"In fact, Assad's regime has become a full Iranian client and Syria has become Iran's testing ground. Now the whole world is watching. Iran is watching and it wants to see what would be the reaction on the use of chemical weapons."

(Release from the Prime Minister's Office)
~~~~~~~~~~
And then see this, regarding implications, from Lt. Col. (ret.) Jonathan Halevi, of the Jerusalem Center for Public Affairs (emphasis added):

"...the Assad regime is experiencing a sense of existential threat and is no longer foregoing doomsday weapons in its effort to survive.

"War crimes and crimes against humanity – indeed, constituting a form of genocide – have been carried out in Syria on a large scale and before the eyes of the world. The lessons of the Second World War have not been learned. Even in the era of modern communications, with daily documentation of the atrocities, genocide can occur under conditions where the international system is paralyzed by interests and rivalries between the powers.

"The international impotence in the face of these events weakens deterrence against the use of nonconventional weapons and has implications in the Iranian context as Tehran continues on its determined march toward nuclear weapons."

Read: The Chemical Attack in Syria: Implications
~~~~~~~~~~
If all of this is solidly convincing, what then is the downside of a US attack?
There is no suggestion that the Americans would take out Assad's cache of non-conventional weapons. That is not even being considered.  This, as I wrote recently, could not be done by bombing, as it would spread toxins in the air.  And Obama has absolutely no intention of sending in troops on the ground.
So Assad would be hurt at some level -- punished for what he did, but his gas supplies and other weapons of mass destruction would still exist.  And, if he is severely weakened, there is the chance that rebels might secure some part of that cache of non-conventional weapons. "Rebels," right now, most likely means al-Qaeda or other jihadists.  For them to get those weapons is something to be very deeply concerned about.
We don't know that radical rebel forces have not already used gas in one battle or another -- there are charges that remain unconfirmed.  What we can be certain of is that they would have no compunctions about using them. And as their goals (an international caliphate, the destruction of the West) are larger than simply winning the war in Syria -- they might use them broadly, attempting to do damage to Israel and to American and other Western interests in the Middle East.
We must hope that we never see this scenario!
~~~~~~~~~~
According to Reuters, since the reports of gas used by Assad have surfaced, there has been an increase in the amount of assistance flowing to the rebels.  Four-hundred tons of equipment, funded by Gulf states, is coming in via Turkey.  What has come in so far -- "mostly ammunition for shoulder-fired weapons and anti-aircraft machine" -- is being distributed in the north. But there is no clarity in this report with regard to which rebel groups are recipients. "Weapons still waiting to cross into Syria included more sophisticated anti-tank guided weapons..."
Read: Large arms shipment reaches Syrian rebels: opposition
At the very same time there is news that Western-trained rebels guerillas (these presumably secular or more moderate) are moving towards Damascus.
~~~~~~~~~~
What if these reinforcements, plus the damage done to Assad in a bombing, were to turn the tide of the war definitively against him?
I think Edward Luttwak probably has it right when he says, "In Syria, America Loses If Either Side Wins":

"It would be disastrous if President Assad's regime were to emerge victorious after fully suppressing the rebellion. Iranian money, weapons and operatives and Hezbollah troops have become key factors in the fighting, and Assad's triumph would dramatically affirm the power and prestige of Shiite Iran and Hezbollah, posing a direct threat both to the Sunni Arab states and to Israel.

"But a rebel victory would also be extremely dangerous for the U.S. and for many of its allies because extremist groups, some identified with al-Qaeda, have become the most effective fighting force in Syria. If the jihadis were to triumph in Syria, Israel could not expect tranquility on its northern border.

"The war is now being waged by petty warlords and dangerous extremists of every sort: Taliban-style Salafist fanatics who beat and kill even devout Sunnis because they fail to ape their alien ways, Sunni extremists who have been murdering innocent Alawites and Christians merely because of their religion, and jihadis from Iraq and all over the world.

"There is only one outcome that the U.S. can possibly favor: an indefinite draw. By tying down Assad's army and its Iranian and Hezbollah allies in a war against al-Qaeda-aligned extremist fighters, four of Washington's enemies will be engaged in war among themselves and prevented from attacking Americans or America's allies." (Emphasis added)

Read: In Syria, America Loses if Either Side Wins
~~~~~~~~~~
So, where are we?
I keep reading that "the guessing" is that Obama will act. That the feeling now is that he must act.  That he's giving broad hints that he is going to act.
But that's where it stops, as I write.  Again and again, Obama indicates the need for more certain documentation.
UN inspectors finally did get to the site of the alleged gassing, enduring some gun fire on the way.  But the US says that it was too late -- that Assad didn't allow these inspectors to get through until critical evidence had been removed.  I don't know. They took specimens.
~~~~~~~~~~
Well before this, I had picked up information that Israel intelligence had provided documentation of the fact that Assad had used gas.  Now see this (emphasis added):

"According to the report Saturday in Focus magazine, a squad specializing in wire-tapping within the IDF’s prestigious 8200 intelligence unit intercepted a conversation between high-ranking regime officials regarding the use of chemical agents at the time of the attack. The German report, which cited an ex-Mossad official who insisted on remaining anonymous, said the intercepted conversation proved that Bashar Assad’s regime was responsible for the use of nonconventional weapons."

[According to a channel 2 TV report] "The nerve gas shells were fired from a military base in a mountain range to the west of Damascus...

"The TV report further added that 'the assessment in Israel' is that the attack was intended to serve as the possible start of a wider operation."

Read: ‘IDF intercepted Syrian regime chatter on chemical attack’
~~~~~~~~~~
Are we seeing an Obama who finally knows he must act but is preparing to do so with caution?  Or is this no more than the typical Obama indecisiveness?  Ever the internationalist, he has explained:
"If the US goes in and attacks another country without a UN mandate and without clear evidence that can be presented, then there are questions in terms of whether international law supports it - do we have the coalition to make it work?  Those are considerations that we have to take into account."
Plus, I'm reading that the US would have to wait until the UN inspectors left Syria.
And then there's the fact that Obama is due to travel next week and wouldn't want to do it when he was out of the country.
~~~~~~~~~~
Oh but the words!  They are powerful.
Today, Secretary of State Kerry said:

"What we saw in Syria last week should shock the conscience of the world. It defies any code of morality...President Obama believes there must be accountability for those who would use the world's most heinous weapons against the world's most vulnerable people."

Read: Kerry: Nations must stand up over Syria chemical weapons
Which means....?
~~~~~~~~~~
According to White House spokesman Jay Carney, "There is very little doubt in our mind that the Syrian regime is culpable."
While the Times of Israel reports that, "...both France and the US said they believed the attack involved chemical warheads and came from regime forces, strengthening the case for Western military intervention..."
~~~~~~~~~~
Back last Friday, Defense Secretary Hagel indicated to CNN that a quick response might be necessary.  He said that military planners had updated Syrian target lists. And the military was providing President Barack Obama "with options for all contingencies, and that requires positioning our forces [and] positioning our assets to be able to carry out whatever options the president might choose."
This sounded serious in intent, especially coupled with the fact that the US was increasing its presence in the Mediterranean with a fourth missile-armed warship.
Read: Hagel: Speedy Response May be Needed in Syria 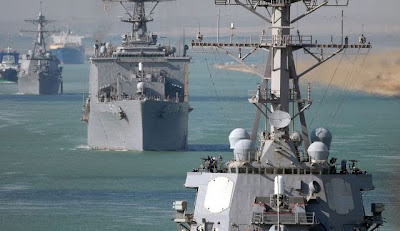 Credit: sott net
~~~~~~~~~~
What seemed to increase the likelihood of US action were reports surfacing about British Prime Minister Cameron  -- who is eager to respond quickly while the outrage is fresh -- pushing Obama to act. Royal Navy vessels were being prepared to take part in the action in the Mediterranean.
~~~~~~~~~~
Just hours ago, however, Hagel, traveling in Indonesia, told journalists (emphasis added):


"The United States is looking at all options regarding the situation in Syria. We're working with our allies and the international community.

"We are analyzing the intelligence. And we will get the facts. And if there is any action taken, it will be concert with the international community and within the framework of legal justification."

Read: U.S. would only act on Syria with international community: Hagel
How different his tone is in this statement compared to his tone last Friday.
"In concert with the international community" does not mean simply with the British.  There's a hedge here, undoubtedly instructed by his boss.
And so, my friends, I would not say an attack is an impossibility. But I would not advise holding your breath.
~~~~~~~~~~
© Arlene Kushner. This material is produced by Arlene Kushner, functioning as an independent journalist. Permission is granted for it to be reproduced only with proper attribution.
If it is reproduced and emphasis is added, the fact that it has been added must be noted.


Technorati Tag: Israel and Syria and Assad and Obama.