The New York Times had an article this week on Palestinian Arabs attacking and killing Israelis with rocks in the euphemistically entitled  In a West Bank Culture of Conflict, Boys Wield the Weapon at Hand by Jodi Rudoren.

Rudoren makes a point of making the attackers into sympathetic people and quoting one of the attackers that this is his "hobby". She refers to them by name, while not identifying their victims by name -- making no reference of the name of the sole fatality she manages to mention, and saying the victim was killed when in fact the attacker was tried and convicted of murder.

If Rudoren's imbalance disturbs you, check out the gallery of photos that accompany the article. 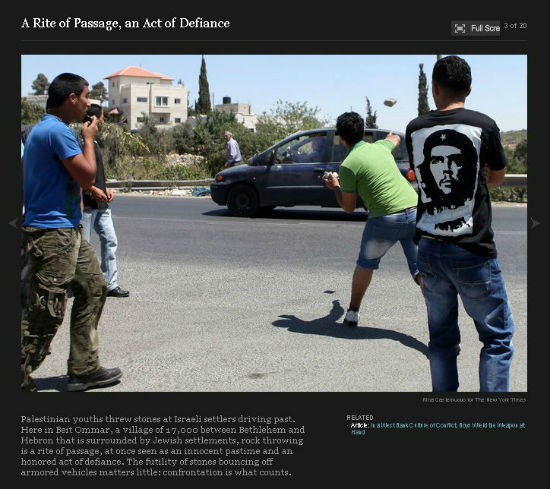 Note the last sentence of the caption:


The futility of stones bouncing off armored vehicles matters little: confrontation is what counts

Apparently, creating confrontation is what counts to the New York Times as well. The Arabs are clearly throwing rocks at a civilian car -- as Lenny Ben-David points out:


This is no 'armored vehicle' being attacked. Its a woman civ. How much were attackers hyped up by photog behind them? http://t.co/PxhX0gI2xf
— Lenny Ben-David (@lennybendavid) August 5, 2013

The New York Times thus avoids the fact that when rocks are thrown at cars, they do not just "bounce off" -- as the victims will tell you.

Here is another picture: 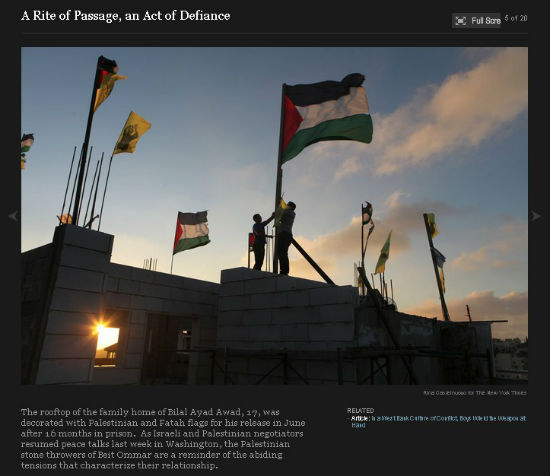 In the interests of context, it should be noticed that a picture of one of the flags is missing.

Here is the flag, from the Yahoo News article Israeli Motorists Shocked When Nazi Flag Seen Flying Near Palestinian Mosque 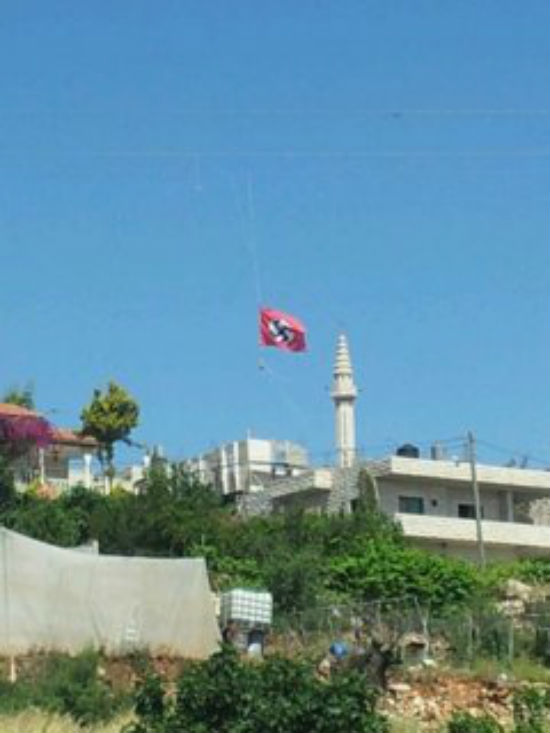 
Israeli settlers on their morning commute got quite the eyeful Monday morning when they saw a swastika-emblazoned red flag flying near a mosque in Beit Omar, a Palestinian village outside of Hebron.

The Palestinian interest in Nazism is not mentioned by Rudoren as one of their hobbies.

That reference to Hebron brings us to a second error in the New York Times gallery: 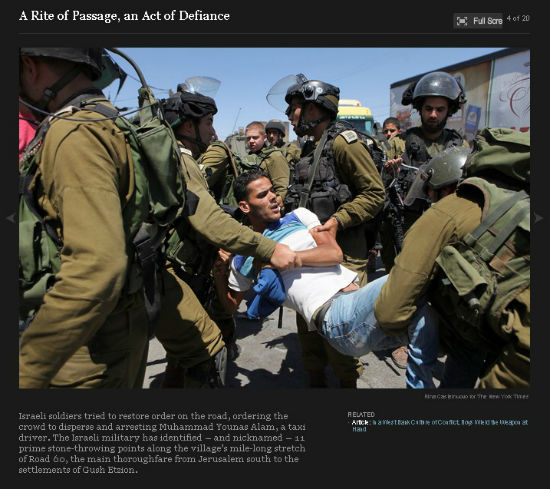 According to the caption here,


the village’s mile-long stretch of Road 60, the main thoroughfare from Jerusalem south to the settlements of Gush Etzion.

But as the Yahoo News article pointed out above, Beit Ommar is near Hebron.

And here is a map, showing that Beit Ommar is between Etzyon and Hebron --  and not north between Etzyion and Jerusalem as the New York Times caption reads.

To finish off, here is a photo from the gallery that poses a puzzle: 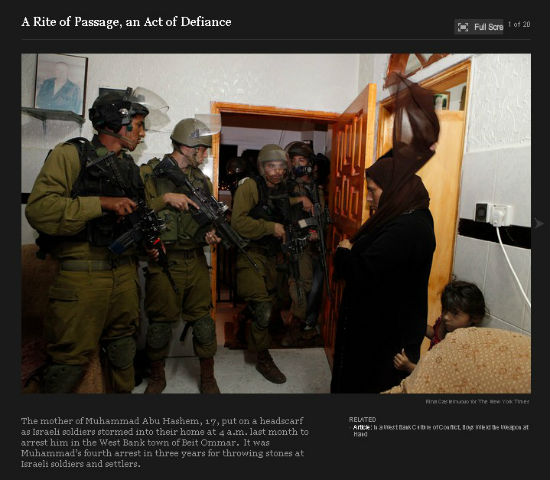 According to the caption,


Israeli soldiers stromed into their home at 4 a.m.

Ben-David has a question for The New York Times:


Pls explain how NYT photog gets this shot of #Israeli soldiers "storming" into house at 4am? Did she storm in 1st? http://t.co/HrCi3d6xsc
— Lenny Ben-David (@lennybendavid) August 5, 2013

We can only wait to hear an explanation of the inconsistencies and outright inaccuracies of Rudoren's New York Times article.


Technorati Tag: Israel and Gaza and Hamas and Operation Pillar of Defense.