With the passing of its Nation-State Law this year, the issue of Israel as a democracy continues to be a topic of debate, and at times becomes even more pointed.

But last week we were reminded that for all the debate and the claims that Israel was revealing its fascist colors, Israeli democracy is alive and well: 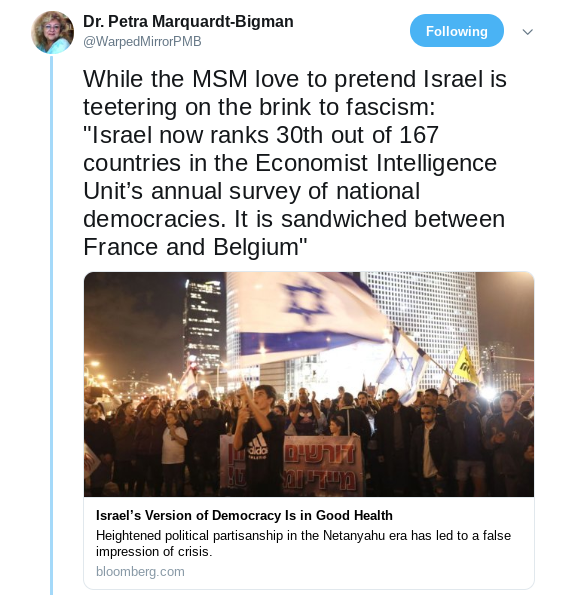 The Economist Intelligence Unit's Democracy Index measures the categories of Electoral process and pluralism, Functioning of government, Political participation, Political culture and Civil liberties.  -- and taking all of that into account, Israel maintained its 2016 ranking of 30 in a field of 167 countries:


Interestingly, with the perpetual accusations each year that Israel under Netanyahu is descending into the depths of fascism, this same Democracy Index indicates the opposite. During Netanyahu's second stint as Prime Minister from 2009 to date, (his first term being from 1996-1999), Israel's democracy rating has been on an upswing -- at least until 2017:

Who knows what rating Israel will get for 2018 in light of the Nation-State Law?

Israel had a mediocre score for both Function of government (which is understandable to anyone who has watched the Knesset in action) and Political culture.

"Function of government" is determined by such things as partisanship, corruption, accountability, checks & balances, levels of political engagement and confidence in government.

"Political culture" is based on levels of popular confidence in democracy, and environment where "the losing parties and their supporters accept the judgment of the voters and allow for the peaceful transfer of power."

The biggest drag on Israel's score was in the area of civil liberties. It is the reason Haaretz's Anshel Pfeffer rails against Israel's "High-functioning Illiberal Democracy," noting that "the country’s strong showing is marred by the Chief Rabbinate’s hegemony and the way Israel treats the Palestinians and other minorities."

On the issue of religion in Israel, one can argue the point.

In their book, #IsraeliJudaism: A Portrait of a Cultural Revolution, based on extensive surveys with more than 3,000 respondents in Israel, one of findings of Shmuel Rosner and Camil Fuchs is that

According to Rosner and Fuchs, the claim that Israel is becoming a theocracy is a myth.

For that matter, one can ask how Pfeffer derives an implied condemnation of the Chief Rabbinate from the Democracy Index to begin with.

On the more pressing issue of the rights of the Arab minority, according to a report issued this month by the Israel Democracy Institute:

There is potential there for improvement, but obviously with a lot of work ahead. According to that same report by the Israel Democracy Institute, respondents this year rank tensions between left and right as being a greater problem than Jewish-Arab relations, though whether that means that Jewish-Arab relations have improved slightly or left-right tensions are worse is unclear.

Writer Zev Chafets takes a different view of the Democracy Index, writing that Israel’s Version of Democracy Is in Good Health. He quotes from a 2002 decision by former Israeli chief justice of the Israeli Supreme Court Aharon Barak regarding, on the one hand, the minimum definition of Israel as a Jewish state:


“At their center stands the right of every Jew to immigrate to the State of Israel, where the Jews will constitute a majority; Hebrew is the official and principal language of the State, and most of its fests and symbols reflect the national revival of the Jewish People; the heritage of the Jewish People is a central component of its religious and cultural legacy.”

and on the other hand, the minimal requirements for Israel as a democratic state, consisting of:


recognition of the sovereignty of the people manifested in free and egalitarian elections; recognition of the nucleus of human rights, among them dignity and equality, the existence of separations of powers, the rule of law, and an independent judiciary system. [emphasis is Chafets']

According to Chafets, Israel fulfills all of Barak’s requirements for a Jewish state -- and lacks one of his criteria for a democratic state: full equality for its Arab citizens. That is because while the Arabs are guaranteed the same civil rights as all other Israelis by Israel’s Basic Law, only Jews have the right to immigration and citizenship.


This discrimination is foundational. Israel was created to be the one place where the Jewish people have self-determination, and the chance to rebuild its culture after a hiatus of two millennia. Israel is for the Jews. The great majority of Jewish Israelis, including many champions of egalitarian civil liberties, understand and accept this. Roughly 90 percent vote for political parties that regard the Law of Return as sacrosanct. [emphasis is Chafets']

We have already seen, from the reaction to Israel's Nation-State Law, that many in the West (and in Israel) see things differently.

With elections scheduled for April, we don't have long to wait before getting an idea of what Israelis really do think about Israeli democracy.