In the second paragraph of this sheet, JVP claims:

That's 3 errors in just one sentence.

Here is the actual title of the article and the name of the author: 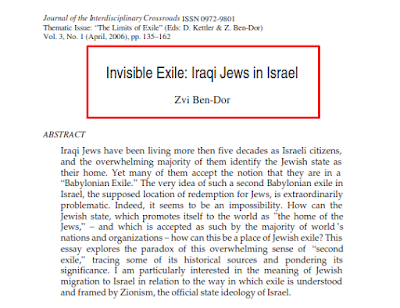 and here is the text in question: 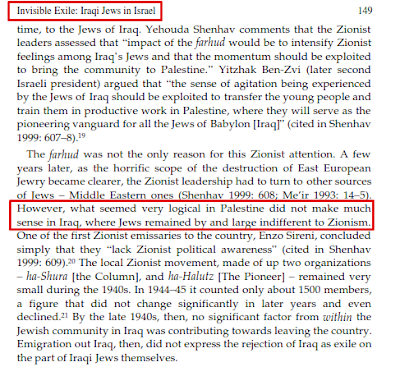 Just look online at a copy of the actual article and you will find:

Other questionable claims by JVP in this "fact sheet" are not as blatant, but do offer an opportunity for setting the record straight:

According to the fact sheet, life for dhimmis under Islam wasn't so bad:


Prior to World War I, much of the Middle East was under Ottoman control, and Jews lived as Ottoman subjects with dhimmi status (people of the book). Under the Ottoman system, ethnic and religious groups had their own leadership and some autonomy over community affairs; they were protected through jizya, a poll tax. Depending on where in the region, violence against Jews was not a usual occurrence.

To claim that Jews were "protected through jizya" is the equivalent of euphemistically saying that store owners pay "protection money" to guard against theft -- without mentioning the 'protection' is from the very gangsters who are coercing the payments. The word 'dhimmi' itself is translated as 'protected' -- not "people of the book," but according to the Quran, the Jizya tax is not about protection, but humiliation:


“Fight against such of those who have been given the Scripture as believe not in Allah nor the Last Day, and forbid not that which Allah hath forbidden by His messenger, and follow not the Religion of Truth, until they pay the tribute readily, being brought low.” [9:29]

How much was the Jizya? Estimates vary.

The 2014 Wikipedia article on Jizya quotes scholars saying that the rate of jizya (head tax) and Kharaj tax (land tax) was more than 20% for all non-Muslim dhimmis. In the western Islamic states of Egypt and Morocco, these taxes had a minimum rate of 20% of all estimated assets and sales, while the highest rates averaged between 33% to 80% of all annual farm produce.

But according to the current Wikipedia article on Jizya, though the rate paid was not uniform, the jiyza tax was one dinar per year during the time of Mohammed, while the maximum was twelve dirhams. Muhammad Hamidullah is quoted as saying that the rate of ten dirhams per year was equivalent to the expenses of an average family for ten days. Old habits die hard, and 5 years ago, a Muslim cleric in Egypt claimed that US aid to Egypt was Jizya and that Egypt must "impose on America to pay aid as jizya, before we allow it to realize its own interests, the ones which we agree to."

What both versions do agree there are Muslim sources that advise humiliation, whether it means walking instead of riding a horse on the way to make payment or grabbing the beard of the dhimmi and hitting him in the face.


JVP mirrors the Arab claim about "the ethnic cleansing of Palestinians and the making of over 700,000 Palestinians refugees," but the role of the Arab world in encouraging Palestinian Arabs to flee is documented by the Jewish Virtual Library:
Jewish Virtual Library also notes the flip side, that in select strategic cases -- as described by Palmach Commander Yigal Allon -- Israel did encourage Arabs to leave from the Galilee, and from Ramle-Lod to relieve pressure on besieged Jerusalem.

The Jews in Iraq


JVP tendency to adopt the pro-Arab narrative is also apparent in their description of Iraq's treatments of its Jews:


The Iraqi Denaturalization Law was enacted in March of 1950 when Iraqi Jews were allowed to immigrate legally to Israel if they gave up their Iraqi citizenship. In 1951, when the government realized that Iraqi Jewish registration increased after violent incidents, the government also froze Jewish assets, keeping Jewish resources in Iraq.

But according to Edwin Black, author of "IBM and the Holocaust," Iraq was not quite so generous to its Jews. He gives the missing context JVP fails to provide that already in October 1948, over a year before that law was passed, approximately 1,500 Jews were fired from their government positions, followed by the boycott and systematic expulsion of Jews from positions in commerce:


Now Jews began fleeing, mainly to neighboring Iran. They smuggled out whatever valuables they could to rebuild their lives. On March 3, 1950, to halt the uncontrolled flight of assets and people, Iraq passed a one-year amendment to Law 1, the Denaturalization Act. This statute revoked the citizenship of any Jew who willingly left the country. Upon exit, their assets were frozen but were still available to the emigrants for use within Iraq.

Thousands of Jews seized the opportunity to leave, believing at least that their assets, while frozen, would still be viable within Iraq until a better day. But when the one-year law expired, a successor anti-Jewish statute was enacted secretly on March 10, 1951. Law 5, known as the Law for the Control and Administration of Property of Jews Who Have Forfeited Nationality, permanently seized all the assets of Jews who had been denaturalized by the previous law and any others that would be pressured to leave the country.

Black addes that when the law was passed, the phones in Baghdad went down to keep Jews from transferring their assets to safety and the banks themselves were closed for three days.


The fact sheet emphasizes the treatment of Mizrahi Jews by Israel -- a controversial issue that has a painful history. Some of the points raised have a factual basis: the disappearance of Yeminite children - many of whom were adopted by Ashkenazi Jews and the thousands of eastern Jews who were given dangerous doses of radiation for ringworm, resulting in death or permanent medical problems. There is nothing to be gained in splitting hairs over the degree of the tragedy or over whom to assign blame.

But there are still false claims made by JVP:


Despite being the majority Jewish population in Israel, Mizrahim are represented in small numbers in the Israeli Parliament and in elite positions such as professorships.

While it is undeniable that Mizrahi Jews have battled for equal recognition and representation, the JVP claim again is incorrect.

A 2015 article in Haaretz reported that Mizrahi Jews already gained equality in representation in 1999:

As for other positions, Wikipedia has an article on Mizrahim with lists of prominent Mizrahi Jews in business, science, politics, the military and writing/academia.


Jewish Voice for Peace also tries to manipulate the issue of Mizrahi Jews to counter the indigenous ties of Jews to the land:


By defining Mizrahim as “indigenous” some political groups attempt to turn Mizrahim into a political tool to counter Palestinian claims to rights and redress from Israel. While there were Sephardi Jews living in Palestine for generations prior to modern Zionism, their relationships to the land, to their Arab and Ottoman neighbors, and to the surrounding cultures were entirely different than those of the European Zionists. The advent of Zionism rendered these longstanding relationships largely irrelevant, as power passed from the hands of European colonizers to those of European Jewish Zionists.

The meaning of the vague reference to the earlier relationships of Jews to the land and the Arabs is unclear -- and as already pointed out above, there is a long history of Arab discrimination and attacks against Jews in then-Palestine itself. The existence of Arabs on the land is a result of either being descended from the Muslims who invaded and conquered the land, having immigrated from other areas in search of better opportunities, or having converted from Judaism to Islam. In none of those scenarios do Arabs have cultural/historical ties to the land that come anywhere near the ties of Jews to the land. There is a reason why people with ties to Arabia are called Arabs and those with ties to Judea are called Jews.

JVP wants us to take invitations to return to Arab countries seriously -- and reciprocate:


It is interesting to ask, given that some Arab countries have invited Jews to return and regain citizenship, would Israel make the same offer to Palestinians

More interesting is how one can compare inviting Arabs back to Israel where they may be a potential terrorist threat, with Jews returning to Arab countries where they would live in danger in response to an invitation that is likely less than sincere.

Bottom line, Jewish Voice for Peace consistently takes on narratives that are either anti-Israel or pro-Arab. Nothing wrong with that -- if in fact those narratives were based in fact.

The problem is that JVP's fact sheet, isn't.