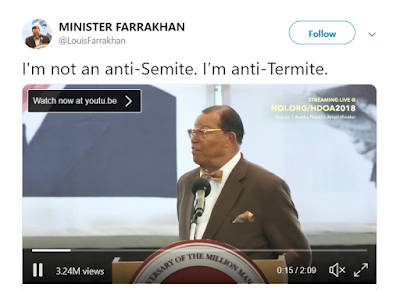 Edwin Black, the author of "IBM and the Holocaust: The Strategic Alliance between Nazi Germany and America's Most Powerful Corporation," wrote a background article in 1986 about Louis Farrakhan.

Black reveals Farrakhan's plan in the 1980's for a project known as POWER, People Organized and Working for Economic Rebirth, which included a plan for selling toiletries and personal products to African Americans:


Black toiletry manufacturers would be subcontracted for production. POWER consumers would commit to a minimum monthly purchase of $20, ordering via an 800 telephone number. Merchandise would be delivered from POWER directly to the consumer's door. Distributors and retailers would be eliminated, doubling POWER's sales income. By this brilliant strategy—combining the best capitalistic experience of Avon, Proctor & Gamble, Fuller Brush, and the Book-of-the-Month Club—the Nation of Islam would make money every time a black customer gargled or went to the bathroom.

The Nation of Islam sought support in Chicago of Johnson Products, which manufactured cosmetics and household products. Farrakhan suggested raising the necessary capital to start production by selling tapes of his speeches at $10 each at various rallies he would hold around the country, with the expectations of drawing 6,000-10,000 people at each rally, in order to raise the necessary millions.

So in 1985, Farrakhan launched a well-publicized speaking tour, starting in Detroit on January 19. But between cold weather and technical difficulties, sales were less than expected.

That is when Farrakhan turned elsewhere for the help raising the money: Muammar Khaddafi.

This is the same Khaddafi who, in 1975, gave NOI leader Elijah Muhammad a $3 million interest-free loan to build a national mosque. Now, on February 24, 1985, Khaddafi had a special address beamed by satellite to a Chicago meeting hall as the climax to the Nation of Islam's annual "Savior's Day" convention. The Libyan leader, who financed terrorist groups around the world, did what came naturally. On a large TV screen, Khaddafi


called upon American black servicemen to desert from the military and engage in wide-spread sabotage and rebellion with weapons he would provide.

A few days later, Farrakhan held a Washington press conference, where he formally renounced the offer of weapons. As Farrakhan put it, the offer "was appreciated but unacceptable unless [Khaddafi] wanted to offer monetary weapons to get the proposed program off the ground."

In the end, Farrakhan got a $5 million interest-free loan from Khaddafi. Khaddafi, of course, was not Farrakhan's only favorite Arab despot. During a 1985 tour of the Middle East:
So his attacks on Jews helped Farrakhan cement his friendship with Arab despots, as well as energize his base.

In fact, when he returned home, Farrakhan's attacks increased, targeting the US, Christians and Jews which had the effect of increasing the size of his audiences among Black Americans even further.

And that is when the problems started:


It was one thing to enter a pro-black business venture. It was quite another to participate in an enterprise conceived and advertised as anti-American, anti-Christian, anti-white, and anti-Semitic.

Eventually, word got out about Khaddafi's involvement in the POWER project and that Johnson Products was involved, tying the company with an Arab despot who was an enemy of the US.


Farrakhan began publicly mentioning Johnson as a courageous black manufacturer willing to stand up to white society and the Jews. The Minister even asked blacks to increase their purchases of Ultra Sheen as a gesture of thanks. Johnson's Jewish business associates were shocked at his involvement, and soon the heat was on.

Farrakhan's Antisemitic statements combined with pressure from Jews who helped Johnson start his business and invested in it forced him to call Farrakhan and tell him that his company could not be associated with Farrakhan in any way. Farrakhan took the news badly and insisted Johnson was backing out because Jews wanted POWER to fail because it would do something to help black people.

Farrakhan should not have been surprised nor upset by the Jewish reaction to his anti-Jewish comments, since he himself advocated the use of economic pressure to defend one's community.


The Minister added that it was right for the black community to fight the Jews with whatever economic influence they had because it was in their self-interest. Asked, "Do you not agree that Jews likewise should use any economic influence that they have to protect their interests as well?" Farrakhan smiled and said, "Certainly...Each of us as a people have a right to use whatever we have at our disposal to protect our interests. But," he qualified, "if those interests lie in...robbing others of that precious right that is given by God...keeping us suppressed and oppressed, then that's not legitimate."

But Farrakhan didn't see it that way, and rather than take responsibility for the chilling effect of his own Antisemitism, doubled down on the excuse that Jews were out to get blacks.

At a rally at Madison Square Garden a little later, Farrakhan publicly lashed out at Jews, whom he accused of being "bloodsuckers of the poor." Soon after, George Johnson issued a formal written statement disassociating himself from Farrakhan and POWER. He gave Farrakhan's Antisemitism as the main reason.

The problem didn't stop there.

Farrakhan's connection with Khaddafi became a headache for the small black-owned Independence Bank in Chicago, where Farrakhan deposited the $5 million he received from him. Black notes in his article that Khaddafi's $5 million, provided $50,000 in annual profit, about 5% of the bank's total. At the time of the article, the bank had canceled the lock-box service for contributions to POWER and from tape purchases. A bank source indicated that in any case, very few checks had come in since the bank had terminated the service -- and it was considering further measures.

Black points out that Farrakhan mixed his personal politics with the product line that formed the basis of POWER, undermining the project.

Farrakhan's friends in the Women's March leadership seem to be doing the same. Phyllis Chesler, a feminist leader starting in the 1960's, writes "The Women’s March is a Con Job":


Most concerning, though, is that the Women’s March leadership appears to have no particular interest in the independent women’s liberation movements. I have read their literature extensively and all I can find are issues, which, however worthy they may be, are not, strictly speaking, feminist issues. The Women’s March addresses things like “immigration reform” and “police violence against black men.” They say they are “anti-racists,” more than they are “anti-sexists.” And they prioritize “queer and transgender” politics, but never plain old garden variety women’s issues.

Women’s issues — even those that are impacted by race, class, religion, and ethnicity — are still woman-specific: sexual harassment on the job; rape; incest; domestic violence; economic, social, and legal discrimination; and of course reproductive rights, including access to birth control, abortion, and prenatal care.

...Sex trafficking? Child marriage? FGM? Forced face veiling? Honor Killing? None of these issues are being addressed by the American Women’s March leadership.

What is going on?

Back in 1985, Farrakhan made his product line for POWER secondary to his politics and the rhetoric of hate that he is dependent on to energize his base. The leadership of Women's March, with its admitted admiration for Farrakhan, has sublimated women's issues to their own politics.

Both are strident in their anti-Jewish and anti-Israel rhetoric.

In the end, a project that had the potential to benefit the black community fell apart.
Whether the same fate will befall The Women's March remains to be seen.