most observers today would agree that, at a minimum, the fundamental features of a democracy include government based on majority rule and the consent of the governed; the existence of free and fair elections; the protection of minority rights; and respect for basic human rights. Democracy presupposes equality before the law, due process and political pluralism.

Looking at how the report evaluates those countries reminds us of the bias of the West when it comes to the Middle East in general, and these states in particular.

Here is a composite of the scores for Israel as compared with "Palestine" and Iran.

And guess who ranks 5th out of 20 countries. 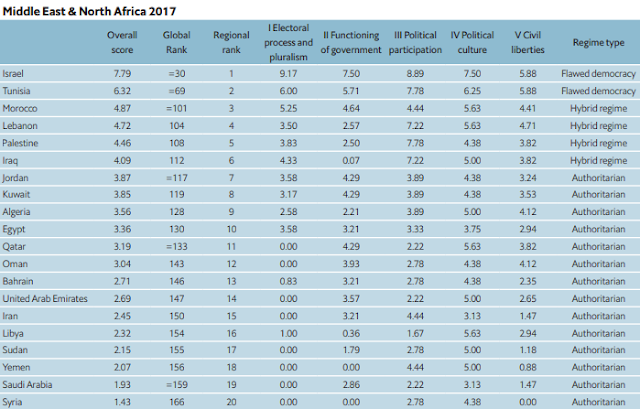 In the area of Electoral Process and Pluralism, they rank low --  as you would expect.
But when you read the report, you find that of the 12 questions used to determine the ranking in that category, 9 relate to having elections.

Now we all know that tracking how long Abbas has been president after his 4-year term ended in 2009 is practically a spectator sport. There have been no elections, neither for president nor Parliament. Of the remaining questions about the freedom to form political parties, by no stretch of the imagination would they get full credit.

Also, "Palestine" is classified as a "hybrid" as opposed to a Democracy or Authoritarian. Hybrids are countries where:


Elections have substantial irregularities that often prevent them from being both free and fair. Government pressure on opposition parties and candidates may be common. Serious weaknesses are more prevalent than in flawed democracies—in political culture, functioning of government and political participation. Corruption tends to be widespread and the rule of law is weak. Civil society is weak. Typically, there is harassment of and pressure on journalists, and the judiciary is not independent.


In these states, state political pluralism is absent or heavily circumscribed. Many countries in this category are outright dictatorships. Some formal institutions of democracy may exist, but these have little substance. Elections, if they do occur, are not free and fair. There is disregard for abuses and infringements of civil liberties. Media are typically state-owned or controlled by groups connected to the ruling regime. There is repression of criticism of the government and pervasive censorship. There is no independent judiciary.

As it turns out, the Index uses criteria that The Economist has decided are not really all that important:


The Economist Intelligence Unit’s index is based on the view that measures of democracy which reflect the state of political freedoms and civil liberties are not thick enough. They do not encompass sufficiently, or, in some cases, at all, the features that determine how substantive democracy is. Freedom is an essential component of democracy, but not, in itself, sufficient. In existing measures, the elements of political participation and functioning of government are taken into account only in a marginal and formal way.

Yet the report claims that "the condition of holding free and fair competitive
elections, and satisfying related aspects of political freedom, is clearly the sine qua non of all definitions [of Democracy]."

We have 2 areas that constitute a "sine qua non" of democracy, areas where "Palestine" is clearly deficient, yet it ranks 5th in the Middle East.

This mirrors how Europe bends over backward trying to find excuses not to label Hamas and Hezbollah as terrorist organizations and why a corrupt terrorism-sponsoring dictator like Abbas is always welcome in Europe and gets standing ovations.

Apparently, some elements of Democracy are judged to be less important than others when it comes to the Middle East, provided that the country is Muslim or Arab.

The report also expresses its concern numerous times that "anti-terror laws have also been widely criticised for curbing the exercise of freedom of expression in the name of protecting public order and national security." Oddly, there is no indication in the report that those states which commit acts of terrorism lose points at all, which mirrors the EU's general lack of an outcry in response to Abbas's habit of paying stipends to terrorists.

Also, while "Palestine" is included in the list, nowhere is there any indication how "Palestine" is being defined -- does it include Gaza with its Hamas terrorist leadership -- an issue that those calling for a two-state solution never get around to addressing.

Another example of the superficial nature of the evaluations in the report is its rating for Iran, which claims:


an improvement in Iran’s score in 2017, which saw it climb four places to 150th globally as a result of consistently high voter turnout in recent elections.

But according to the American Enterprise Institute, the reason for the large turnout may have nothing at all to do with political participation:


One correspondent explained that the government also stamps birth certificates at polling stations when the presidential ballot is collected. Those stamps are necessary for university admission, bank loans, or state employment. What reportedly happens is that many voters outside the capital and major cities pick up the presidential ballot in order to qualify for such benefits. The state counts the ballot, and the “voter” spoils the presidential ballot since their interest is local only and they do not wish to legitimize the broader regime.

At a time when the media, traditional as well as social, is understood to have its own biases and agenda, their reports and articles require a critical eye, now more than ever.