Arlene Kushner on Palestinian Murder of Evyatar Borovsky and Other Developments

Sometimes it's impossible not to weep.
Yesterday morning, Evyatar Borovsky, 31, was knifed to death by a terrorist at the Tapuach Junction in Samaria.  Borovsky, who lived in near-by Yitzhar, was the father of five, the eldest of whom is seven. 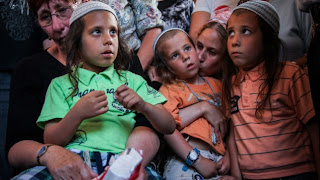 Credit: CIFWatch
Borovsky was praised at his funeral -- which was attended by thousands -- as an exemplary son, husband, and father, an actor, an intellectual, and a medical clown who loved to make people laugh.
"My righteous son was killed just for being Jewish," said his father, "and now five children have no father."

In this picture, you see one of his sons mourning him. 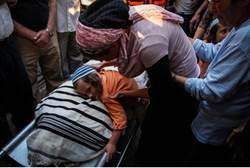 Credit: Flash 90
~~~~~~~~~~
Borovsky's murderer, Salam Al-Zaghal, a Palestinian Arab resident of a village near Tulkarem, approached Borovsky from behind; after stabbing him, he grabbed his gun and attempted to escape. He was apprehended following a gun fight.
According to reports, he had been released from prison just six months ago, after serving time for throwing rocks as well as Molotov cocktails.
~~~~~~~~~~
Speaking of throwing rocks...
Remember little Adelle Biton?  She, her mother and two sisters were all injured in March when her mother lost control of her car after rocks were thrown at its windshield, breaking it.  Adelle was the most seriously injured and remains unconscious.
At first doctors believed her head injury was a result of the car accident, but it has since been determined that a heavy rock hit her head directly. 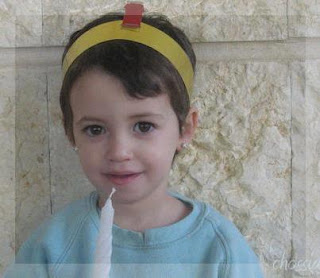 Credit: photoblog
Just days ago, Adelle reached her third birthday, and the family held a party for her at her bedside, singing to her.  May she have a good life, her mother prayed, "and may she know that there are miracles."
Sometimes it's impossible not to weep.
Pray for her recovery, please: Adelle bat Adva.
~~~~~~~~~~
Times of Israel reports that the Fatah Facebook page has information about Borovsky's murderer, above.  The terrorist is referred to as, "the hero, the released prisoner."
Pictures of the attack were posted on the Facebook page, each one boasting of its "success" and accompanied by wishes for the terrorist's speedy release. Under a portrait of al-Zaghal, with an illustration of an AK-47 rifle beneath his head, was the caption,

"Israeli security officials estimated that Zaghal’s attack may have been carried out in order to establish his credentials as a loyal Palestinian after his brother was tried by a Palestinian Authority court Monday for allegedly collaborating with Israel."

Please note this well: "A loyal Palestinian."
~~~~~~~~~~
While from Israel National News we have this:

"'This despicable murder was the direct result of inadequate action on rock-throwing terrorism, of opening the checkpoints, and of treating daily terrorist attacks as "disturbances,"'Mesika accused. [Note: checkpoints are taken down as "good will" gestures -- and I choke even as I write this.]

"One month ago Mesika urged the IDF to begin responding to rock attacks with live fire, and warned that the lack of a harsh response was creating 'anarchy.'

"Sources in the Bayit Yehudi (Jewish Home) Knesset faction joined Mesika in calling Tuesday for a tougher response to terrorism.

“...'When terrorists with blood on their hands are released after just a short time in prison, they understand that murdering a Jew is OK...

"'We call on the government of Israel to start taking the threat of terrorism seriously. Don’t play with terrorists. The murder of Israeli citizens is not a game.'"

Read: Leaders Urge, ‘Stop Playing with Terrorists’
~~~~~~~~~~
There was a very tempered response by the Israeli government to the offer by the Arab League to "possibly" consider "minor" land swaps as part of its "Peace Plan."
It is significant that Netanyahu released no personal statement; the statement came, instead, from his office:
While it said that Israel welcomed the support given by the Arab League delegation and the US Secretary of State to the diplomatic process, it clarified that Israel was prepared to start negotiations immediately without pre-conditions, and expected the PA to similarly refrain from placing pre-conditions on the process.
Netanyahu would not be overtly obstructionist -- would not say that the Arab League plan is not acceptable in any terms because it fails to recognize Israeli rights.  That would simply not be his style, as he prefers to appear to be a player.  But the statement from his office is anything but a wholehearted endorsement of the League position.
In fact, it represents no change in Israel's position: Yes to going to the table, but without pre-conditions.
And keep reading for more.
~~~~~~~~~~
Today, speaking at a meeting of the National Public Diplomacy Forum at the Foreign Ministry, Netanyahu -- who is acting foreign minister -- said (emphasis added):

"Our top public diplomacy mission is to explain that the root of this conflict is not territorial.  It is over our very existence in any borders whatsoever.

""Day in, day out, and hour by hour, they have been preaching [that Israel has no right to exist]. So certainly the lie has taken root, and there is no way to fight a lie except with the truth."

Read: Netanyahu: Conflict is Over Israel’s Existence, Not Land
He made no explicit reference to the Arab League proposal in his statement here, but the implication is clear.
Abbas refuses to recognize Israel as the nation state of the Jewish people.
What is more, the Arabs persist in their demand that so-called "refugees" -- now numbering over 4 million because of the bogus way that UNRWA tracks them -- "return" to Israel.  Understand this: If (Heaven forbid) there should be a Palestinian state, these "refugees" would not be counted among its citizens.  This has been made clear repeatedly on the record. The demand that they should return to Israel -- which, it is claimed, is their "rightful" place -- would be sustained. There is absolutely no reason for this other than a desire to overwhelm the Jewish population of Israel and destroy Israel from within.
In the face of these bitter realities, what the hell is an offer -- not even for Israel to retain land that is rightfully hers -- but for a square-meter-by-square-meter exchange of land?
~~~~~~~~~~
Netanyahu's statement on public diplomacy is thus very welcome.  Everyone who cares about Israel, not just Israeli diplomats, must take it to heart.  Day in and day out, hour by hour, the truth must be told.
The mainstream media in the US certainly doesn't talk about these matters.  But people must learn about the terrorists who murder innocents, and about Fatah (the predominant party of the PA!) that praises those terrorists. They should be told as well that "Palestinians poll highest among world's Muslims favoring suicide bombings."
See: Palestinians poll highest among world's Muslims favoring suicide bombings ,
Peace? A peace process?
I speak for many Israelis, when I say that my heart is heavy with the injustices, and that I am not in a conciliatory mood.  We must pursue our rights and keep our people safe.  Period. Anyone who imagines we "owe" the Arabs anything is morally skewed.
~~~~~~~~~~
And there are good people working for the interests of Israel.  Housing and Construction Minister Uri Ariel (HaBayit Hayehudi) has told the prime minister that his party will not support the 2013 budget if funds are not included to cover construction in Judea and Samaria, particularly construction that was agreed upon after the PA's unilateral move at the UN General Assembly last year.
This, he said, would be seen by his party as going back on promises "and we will oppose the approval of the budget until a solution to the promised funding is found."
Bravo for this!
It's easy for Netanyahu to make a dramatic statement of intentions in the midst of a political challenge, and then to let it slide by when time for actualization comes.  Ariel is attempting to prevent this from happening.
Said Ariel, yesterday:

"I turned to the prime minister today and warned him that if the 2013 budget doesn’t include full funding for building projects in Judea and Samaria...Bayit Yehudi will consider its coalition agreement as having been violated, and it won’t support the budget unless a solution is found for the promised funds."

Most controversial is the issue of building in E1, which runs between Ma'aleh Adumim and Jerusalem, and which the PA claims (erroneously) is necessary for a contiguous Palestinian state.
Coalition chairman Yariv Levin (Likud) said that


"Likud Beitenu is obligated to the settlement enterprise. We will insist that the new budget strengthens the settlements and ensures their development."

Read: Minister Ariel: State must fund settlement construction
~~~~~~~~~~
And then there is the legislation that is being moved along that would require approval in a national referendum and a super-majority in the Knesset before any land could be relinquished in a "peace deal."
The original legislation was promoted in 2010 by MK Ofir Akunis (Likud), and is now being shepherded by Coalition Chairman MK Yariv Levin (Likud), who has drafted a new amendment to the proposed bill.  Naftali Bennett (Habayit Hayehudi) and Yair Lapid (Yesh Atid) are expected to be for this proposal, which was addressed in their coalition agreements.
And...Prime Minister Netanyahu supports this legislation as well:


"A peace deal is not just any move, and a peace deal cannot be decided by a simple majority when it affects everyone. We will support it."

His support is a major factor in seeing this pass.
Avigdor Lieberman (Yisrael Beitenu) was opposed in coalition discussions, but I have since read he would go along.
Read: Before actual talks, Israelis clash over referendum on peace deal
Not surprisingly, Tzipi Livni is adamantly opposed.  This tells us, clearly, that she does not believe any deal she would be instrumental in striking with the PA would receive public and Knesset sanction.  She is a bit of a hypocrite on this score.  For in 2000, when she was still a Likud member of the Knesset, she supported a bill that would have required a public referendum on any agreement with the Palestinian Authority.
~~~~~~~~~~
The urgent matters I have written about here have again trumped the analysis (such as it will be) of the situation in Syria that I had hoped to offer, as well as other matters to be mentioned.
There is, please Heaven, always the next posting.
~~~~~~~~~~
© Arlene Kushner. This material is produced by Arlene Kushner, functioning as an independent journalist. Permission is granted for it to be reproduced only with proper attribution.
If it is reproduced and emphasis is added, the fact that it has been added must be noted.

Email ThisBlogThis!Share to TwitterShare to FacebookShare to Pinterest
Labels: Israel