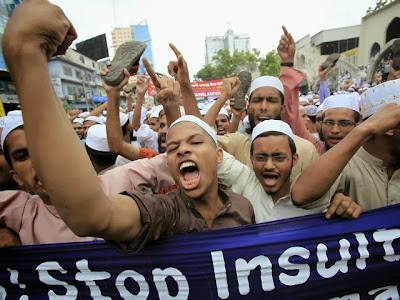 Objective observers should be rightfully concerned by the "International Conference on Islamophobia: Law & Media" held by the Turkish government's Directorate General of Press and Information (DGPI or BYGEM in Turkish) and the Organization of Islamic Cooperation (OIC) this past September 12-13 in Istanbul's Grand Tarabya Hotel. Conference participants substantiated all too many threats emanating from various Muslims and their allies, calling into question their respect for free speech and freedom of expression.


The conference website defined "Islamophobia" according to the Greek suffix phobia as a "groundless fear and intolerance of Islam and Muslims." By "culminating in hate speech and attitudes towards Muslims," this phobia is "detrimental to international peace." There should be "recognition of Islamophobia as a hate crime and Islamophobic attitudes as human rights violations."

In Istanbul, Turkish Prime Minister Recep Tayyip Erdoğan reiterated his well-known meme (see here and here) that "Islamophobia" as a "kind of racism" is a "crime against humanity." "No monotheistic religion," Erdoğan elaborated, "adopts, supports, permits or leads terror."

"If Christianity and Judaism cannot be mentioned with terrorism," Turkish Deputy Prime Minister Bülent Arinç seconded in his remarks, "then our noble religion Islam cannot be defamed this way either." Arinç discerned the main cause of "Islamophobia" in the belief that "Islam and democracy are not compatible," yet "Muslims are democrats in essence."

Joining Esposito on the panel to compare anti-Semitism with "Islamophobia" was Norman Gary Finkelstein. The Jewish child of Holocaust survivors, Finkelstein has a long record of comparing Israel to Nazism and supporting groups such as Hezbollah while having his views of fellow Jews celebrated among anti-Semites.

Joining Lean on a panel were American and Iranian professors Stephen Sheehi and Saied Reza Ameli. During a 2011 visit to the University of Florida, Sheehi had defined "Islamophobia" as merely being a "hatred of brown people." Ameli, meanwhile, was afounder and leading member of the United Kingdom's Islamic Human Rights Commission (IHRC), a "radical Islamist organization" in the assessment of Israel's Stephen Roth Institute for the Study of Contemporary Anti-Semitism and Racism.

The self-proclaimed Turkish "Marxist academic" Ali Murat Yel and his American colleagueHatem Al Bazian were also in Istanbul. Yel has praised Erdoğan's ruling AKP party for having "paved the way for…a democratic society" in Turkey despite Islamist concerns. "The West," Yel has also opined, "may come to appreciate the Muslim experience of both Andalusia and the Ottoman past in dealing with their religious minorities." The "outspoken anti-Zionist" Bazian, meanwhile, has in the past stated notoriously genocidal Islamic hadith against the Jews.

Turkish academic Bülent Şenay oversaw the conference declaration drafting. In a 2010 presentation to the Organization on Security and Cooperation in Europe (OSCE), Senay deemed "Islamophobia" as "today…the strongest form of hate crime," extending to the "psychological terror" of "cultural terrorists." Şenay condemned "hate speech…targeting all the tenets and adherents of Islam…under the banner of the freedom of expression." Additionally, "hate crimes originate from hate speeches," Şenay argued in another 2010 OSCE presentation. Şenay is the founder of the European Muslim Initiative for Social Cohesion (EMISCO), an entity prominent in the past for seeking OSCE opposition to "Islamophobia" speech (see here, here, and here).

Dahlia Mogahed rounded out the conference participants. This Esposito protégé and Obama Administration appointee has had numerous associations with MB-linked groups in the United States. She has also downplayed the extent of violent extremism among Islamists globally as well as the dangers of sharia.

Distinguishing between "legitimate criticisms…and hate-filled or irrational criticisms" was for BYEGM Director General Murat Karakaya in the conference final statement a "fundamental question." Yet the conference did not inspire the confidence that freedom of expression was a consideration in the discussion, particularly in light of host country Turkey's own harsh treatment of irreverence towards freedom of expression (see here and here). The Istanbul agenda is yet another example of Islamists seeking to internally codify blasphemy under Sharia.