Reviewed by Raymond Ibrahim
FrontPageMagazine.com
August 27, 2013
http://www.meforum.org/3600/the-last-israelis
After constant exposure to critically important news, it begins to lose all meaning and sense of urgency. Hearing the same warnings over and over again—especially when the status quo seems static—can cause a certain desensitization, a resigned apathy that ignores the warnings in the wishful hope that they won't materialize. This hope becomes more optimistic (and passive) with each passing day that the warnings do not materialize.

One of the most evident examples of this phenomenon is the threat of a nuclear Iran. For years, the international community has been hearing about Iran's pursuit of nuclear weapons; for years, the world has been hearing Iran make bold, genocidal threats—most notoriously, that it will wipe the state of Israel off the map. But so far, Iran reportedly still has no nukes, and no large attack has been launched on Israel. Thus, many have become desensitized to the situation—including those charged with ensuring that a nuclear Iran never becomes a reality.

But that reality has never been closer, as we are warned in Noah Beck's recent novel, The Last Israelis - an Apocalyptic, Military Thriller about an Israeli Submarine and a Nuclear Iran

.
It is our current proximity to apocalyptic war that makes Beck's doomsday warning about a nuclear Iran so compelling. If the worst comes to pass, this chilling attempt to rouse the West from its torpor could turn out to be that final, horribly prophetic alert that went unheeded. 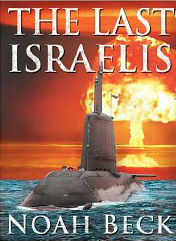 Much of the public is conditioned by the mainstream media and government to focus on the short-term—U.S. presidents tend to concentrate only on matters pressing during their tenure—and rarely ever on longer-term issues or threats. Thus, a nuclear holocaust in the Middle East seems unrealistic. Add to this the fact that virtually all nations with nukes have never used them, and one can see why a certain apathy prevails when it comes to the idea of a nuclear Iran.

But Iran is different. Its Shiites leaders believe that at the end of times, a 9th-century prophet, the 12th Imam, will reappear to kill all the infidels and raise the flag of Islam in all four corners of the world. Reza Kahlili, a former CIA operative in Iran's Revolutionary Guards, reported last year on the apocalyptic statements from Iran's Supreme Leader, Ayatollah Ali Khamenei, who dictates Iran's nuclear policy. Khamenei's statements, which were carried by Iranian state media, proclaimed that "The issue of Imam Mahdi is of utmost importance, and his reappearance has been clearly stated in our holy religion of Islam. We must study and remind ourselves of the end of times and Imam Mahdi's era… We must prepare the environment for the coming so that the great leader will come." Kahlili also translated Iranian news reports from last June suggesting that Iran's newly elected president, Hassan Rouhani (the so-called "moderate"), shares Khamenei's views. The reports quote Rouhani thanking the Islamic messiah for his June 15th electoral victory.

Indeed, the Islamic theocracy ruling Iran believes that apocalyptic scenarios are necessary before Islam's savior, the Mahdi, or "Hidden Imam," returns (including a prophecy that Muslims must slay all Jews before he returns); believes that death in the jihad results in instant paradise for the "martyr"; believes the oft recited Islamist sentiment that "Muslims love death as Westerners love life"—a sentiment that has manifested itself in reality all too often by young Muslim men and women sacrificing their lives to become suicide bombs that kill Americans, Israelis, and many others.

In short, Iran has a worldview that is markedly different than the one that guides Western decision-making. Unlike nuclear-armed Western secular democracies, a nuclear Islamic supremacist regime in Iran is much more prone to use the devastating weapons. Thus, the situation is serious, is urgent, and, as the United Nations refuses to act decisively, could trigger a holocaust that sees millions of innocent people—Israelis and Iranians alike—wiped out overnight.

As a powerful, well-researched novel, The Last Israelis provides a gripping answer, and helps to neutralize the desensitization and/or apathy to a nuclear Iran by depicting an all too real scenario of what a nuclear Iran could ultimately mean for the region and the world.

The narrative follows the lives of an Israeli submarine crew. After news that Iran has achieved nuclear status vis-à-vis an impotent or indifferent West, they are yanked from loved ones during an interrupted and all too brief shore leave, and sent on a mission possibly to retaliate with submarine-launched nuclear ballistic missiles, if a nuclear strike is launched against Israel. Halfway through their mission, the submariners lose contact with base command and the ambiguity surrounding those circumstances—and what they could imply—creates palpable tension and conflict among the crewmembers.

What follows among the crew is a very philosophical—though all too human—debate over what they should do, as it is now up to them to decide the fate of millions:


If the final communication from headquarters states that Israel was "attacked on all fronts," and that naval command was hit and "in crisis management mode," what did that mean for the rest of the country that had been "attacked on all fronts?" What did it mean for [the submariners'] loved ones?…And what did it mean to decide to do something that would kill millions of human beings in just a few hours? Each submariner struggled with these weighty questions, trying to decide for himself what was the most appropriate course of action under the circumstances.

The nuanced debates are particularly interesting because Beck's crew is as heterogeneous and complex as the Israeli society that they defend, including a Vietnamese-Israeli, an Arab-Israeli Druze, an Ethiopian-Israeli, and a Christian Israeli. Based on their individual backgrounds, upbringings, and most importantly, experiences, this motley crew offers dramatically different perspectives—from the hawkish to the dovish—that reflect the diverse views that one finds in a debate-driven democracy like Israel.

Besides issuing an urgent warning, The Last Israelis is so grounded in history and current events—including real people, places, and events—that it provides an entertaining way to become educated about the Middle East in general, and the conflict between Israel and Iran in particular.

And in one crucial respect, this book is no fiction: a nuclear armed Iran is very bad news, not just for Israel, as many think, but for the whole region and stability of the world. Therefore, the world is obligated to act now to ensure that the horrific scenario recounted in The Last Israelis never comes to pass.

Technorati Tag: Israel and Iran and Noah Beck and The Last Israelis.