Obama's Problem: Putin and Assad Apply Alinsky's Rules Better Than He Does

Ever since the campaign leading up to the Presidential Election in 2008, much has been made of the lessons Obama has learned from community organizer Saul Alinsky's Rules for Radicals -- and Obama's expertise in utilizing them:
Yet if you look at his latest foreign policy fiasco, it appears that our enemies are doing a much better job of exploiting Alinsky's rule than the Obama administration is.


When it comes to rule #4 to make one's enemy live up to its own rules, Russia easily outclassed Secretary of State John Kerry. Bloomberg was among those who pointed out Russia Seizes on Kerry Comment on Syria Giving Up Weapons:


Russia jumped on a hypothetical comment by Kerry, who told reporters in London that Syrian President Bashar al-Assad could avert a threatened U.S. attack by turning over “every single bit of his chemical weapons to the international community in the next week.” While Kerry added immediately that Assad “isn’t about to do it, and it can’t be done, obviously,” the idea took on a life of its own.

On the other hand, Obama broke one of Alinsky's cardinal rules (#6) in pushing a military option, a tactic that clearly is not one enjoyed by most liberal Democrats -- and as it turned out, not by Republicans either. By the same token, what choice did Obama have. It's not as if he was in a position to push Assad to live up to his own rules as a ruthless dictator.

However, in pursuing that military option, Obama broke the second rule -- not to go outside the expertise his people. Just consider the silence among groups such as J Street as well as the liberal actors who were so outspoken against Bush. While they have no come out openly against Obama, they have not come out publicly pushing his plan either.

If we are going to list Alinsky's rules that Obama has broken, we can also reference #8: not to let up the pressure. One could only cringe while listening to Kerry assure Americans -- and Assad -- that any attack on Syria would be "unbelievably small." Kerry's statement also broke the first rule by eliminating any illusion as to how small and limited any attack would be.

In the end, Obama's threat to make Syria pay for crossing his "red line" has no meaning. On the other hand, Syria's threat to retaliate against Israel is one that may very well be one that is more terrifying than the actual attack itself (#9) -- as evidenced by the extent to which the threatened attack, no matter how unlikely, is quoted as an excuse not to bomb Syria.

Things have gotten so bad, that there is no need for our enemies to ridicule Obama -- the media is doing it for them; 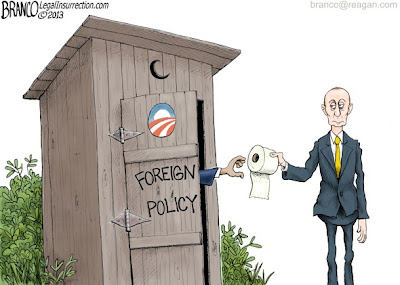 Obama may not have helped himself by being the one who addresses the public through The Tonight Show, while Assad is interviewed by Charlie Rose and Putin has a piece in The New York Times.

The biggest mistake Obama may have made is allowing this to go on for so long, with speculation having started since last year when he made his "red line" comment. Alinsky warned that a tactic that drags on too long becomes a drag -- a truth borne out by the lengths the Obama administration has gone to in order to bury the issue of bombing Syria and move on, with consequences that may come to haunt us.

That is, until that video showed up on YouTube of an insurgent tearing out the heart of a Syrian soldier and eating it. The debate of who is a moderate and who is an Islamist notwithstanding, that image concretized the image of the rebels as being no better than Assad -- and of course allowed for rule #13, freezing and polarizing that image.


Technorati Tag: Obama and Saul Alinsky and Putin and Assad.