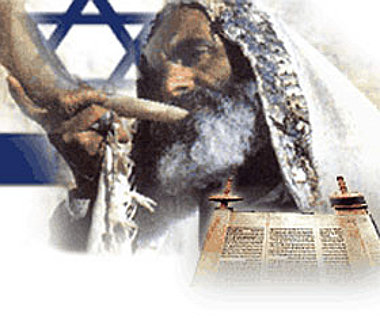 Credit: mymorningmeditations
Tomorrow night begins the two-day holiday of Rosh Hashana, a time of repentance and renewal.  I do not expect to post again until after the Shabbat following Rosh Hashana.
I extend my heartfelt wishes for health and fulfillment for each of you.  And for all of Israel the blessings of peace.  May our prayers reach Heaven.
~~~~~~~~~~
I provide here a beautiful rendition by Israeli singer David D'Or of Avinu Malkheinu -- a prayer traditionally recited on Rosh Hashana and on Yom Kippur.

From The Jerusalem Connection Report
Our Father, Our King, we have no King but You.  Hear our voice and save us.
And that, when all is said and done, is the final truth: We can -- as we are God's partners on this earth, we must -- work hard to repair the ruptures in the world.  But at the end of the day, we must bow our heads and acknowledge that it is in His hands.
~~~~~~~~~~
In a lighter spirit:
The Fountainheads: Dip Your Apple in the Honey
~~~~~~~~~~
A sweet year... 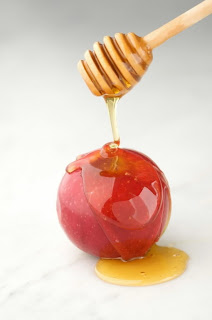 Credit: Baltimoresun
~~~~~~~~~~
In my last posting I inadvertently provided the wrong URL for the article on injured Syrians, including children, being treated here in Israel.  With thanks to those who caught it, I provide the URL here:
How to change the world
The over-riding theme of this article is pride in the way we Israelis conduct ourselves.  Our values truly are different -- especially different from those of others in this part of the world.  The world chooses not to notice, but we must notice and hold fast to who we are.
~~~~~~~~~~
The news?  It goes on, as perverse and convoluted as ever.  Truth is, if I were to write postings non-stop, I still wouldn't cover everything I'd like to touch upon.
Obama does seem to be lobbying members of Congress with a vigor that suggests he wants them to sign off on his attack on Syria.  Speaking on Fox News, Secretary of State Kerry said:
The administration "has the right to act regardless of what Congress does," though it prefers to have Congress' backing. "We are stronger when we work together ... America intends to act."
A very foolish, rather schizoid, position: We don't need your approval, Congress, but it would be better for all of us if you gave it, however be aware that we will act even if you don't give it.  Uh huh.  Does lend the impression that those running the American government don't quite know what they're doing.

"...The president of the United States is preparing in advance to shift the blame if his strike on Syria proves to be unpopular and ineffective. He’s furious about the box he’s placed himself in, he hates the ridicule he’s (rightly) incurring, but he doesn’t see any way out.

What he does see is a political (and geopolitical) disaster in the making. And so what is emerging is what comes most naturally to Mr. Obama: Blame shifting and blame sharing. Remember: the president doesn’t believe he needs congressional authorization to act. He’s ignored it before. He wants it now. For reasons of political survival. To put it another way: He wants the fingerprints of others on the failure in Syria.

"Rarely has an American president joined so much cynicism with so much ineptitude."

Read: Barack Obama’s Staggering Incompetence
(With thanks here to Dan F. for calling this to my attention.)
~~~~~~~~~~~
What really, really irked me, however, is Obama's using Israel as an excuse (pardon me...a "reason"), provided to members of Congress, as to why he has to hit Syria: Iran and Hezbollah will be emboldened if he doesn't.  And, an emboldened Iran and Hezbollah are bad for Israel.
All of this is true enough.  But it happens that an emboldened Iran and Hezbollah are not in the best interests of the US either.  He should have left it at that, especially as theoretically Obama is on a confrontational course with Iran (see below): We do not want Iran emboldened with regard to its nuclear development.  Nor do we want Hezbollah, which foments terrorism world-wide, emboldened either. End of story
There are anti-Israel, anti-Jewish elements in the US and elsewhere in the world who don't miss an opportunity to blame Israel for whatever is going on, no matter how far-fetched.  Does Obama have to provide them with fuel?
~~~~~~~~~~
But, as we all need a laugh from time to time, I'll share this news as well:
It's been reported that Obama called Netanyahu to provide assurances that he was determined not to let Iran go nuclear.

Read: Obama unleashes horror in Jerusalem
~~~~~~~~~~
If there is good news on all of this, it is that Assad may have to confront some unexpected backlash because of his use of chemical weapons.  Reports Haaretz (emphasis added):

"[Assad...] cannot hide the shock that has hit his closest allies: Russia and Iran. Russia has decided to freeze the shipment of refurbished MiG jets, the S300 antiaircraft missiles, and the Yak training planes to Syria – based on reports in the Russian newspaper Kommersant. The official Russian explanation is that Damascus has not met its payment conditions, but it seems that the timing is no coincidence...

"Nor can declarations coming from Tehran be particularly encouraging for Assad: Iranian President Hassan Rohani denounced the use of chemical weapons – but avoided placing the responsibility on any of the sides. Former Iranian President Akbar Hashemi Rafsanaji justified the American attack..."

Read: A game-changer for Assad, even if there is no U.S. strike
A JPost report goes even further:

"Events in Syria have reportedly prompted key Iranian figures to express their opposition to Tehran's ongoing involvement in helping ...Assad remain in power.

"Sources inside Iran claim that former president and opposition leader Hashemi Rafsanjani asked the commander of the Iranian al-Quds Brigades...to stop sending volunteers to fight in Syria, according to a report published on Sunday in the Iraqi daily Azzaman.

Read: Sources: Internal dissent in Iran rising over the growing Syria turmoil
~~~~~~~~~~
The nuclear-powered USS Nimitz (one huge ship!) and other ships in its strike group are being sent to the Red Sea as back up for a strike on Syria, which may lend credence to the seriousness of Obama's intentions.  (We'll see.) 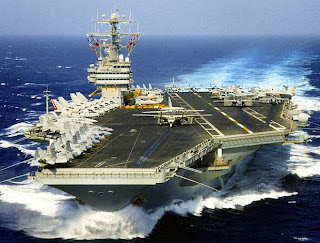 Credit: trunews
I am picking up reports of a reconnaissance ship being sent into the eastern Mediterranean by Russia, but it's not clear if this is the same ship I had written about previously.
~~~~~~~~~~
For those who may still wonder why it matters to Israel if the US hits Syria...
Maj.-Gen. (ret.) Amos Yadlin, former chief of Israel's military intelligence, writing with Avner Golov, says (emphasis added):


"The most important Israeli interest in the context of an American attack is the unequivocal clarification that there is a high price to pay for the use of nonconventional weapons. From a broader perspective, it is important for Israel that the U.S. reestablish its strategic influence in the Middle East and improve its credibility and deterrence in the region, which have eroded over the past three years. Restoring American deterrent power would strengthen the standing of U.S. allies, including Israel, in the struggle between the region's moderates and radicals."

Read: A United States Attack on Syria: Implications for Israel
~~~~~~~~~~
We have been told that the sixth session of negotiations between Israel -- represented by Tzipi Livni and Netanyahu envoy Yitzhak Molcho -- and the PA -- represented by negotiators Mohammad Shtayyeh and Saeb Erekat -- would be held in Jerusalem today, and that US envoy Martin Indyk or another US official would be present (which has not been the case with every session).
The US is calling the talks "serious," while Mahmoud Abbas, speaking in Ramallah said that no core issues had been touched upon -- parties were still setting out preliminary positions.
For the first time, Abbas has admitted to his party that he struck an agreement not to "join any international organization," which I assume means not to participate at the UN, during this period, in exchange for Israel's agreement to release 104 prisoners.
A second group of those terrorist prisoners is due to be released within weeks.  Ouch! I expect Abbas to drag out the negotiations until he has all 104 -- regardless of all his threats of walking away because of the "settlements."
~~~~~~~~~~
There is a great deal more to say, about the Palestinian Arabs, and about Arabs who are Israeli citizens. But it will have to keep until after Rosh Hashana.
~~~~~~~~~~
© Arlene Kushner. This material is produced by Arlene Kushner, functioning as an independent journalist. Permission is granted for it to be reproduced only with proper attribution.
If it is reproduced and emphasis is added, the fact that it has been added must be noted.

Technorati Tag: Israel and Rosh HaShanah and Syria and Obama.